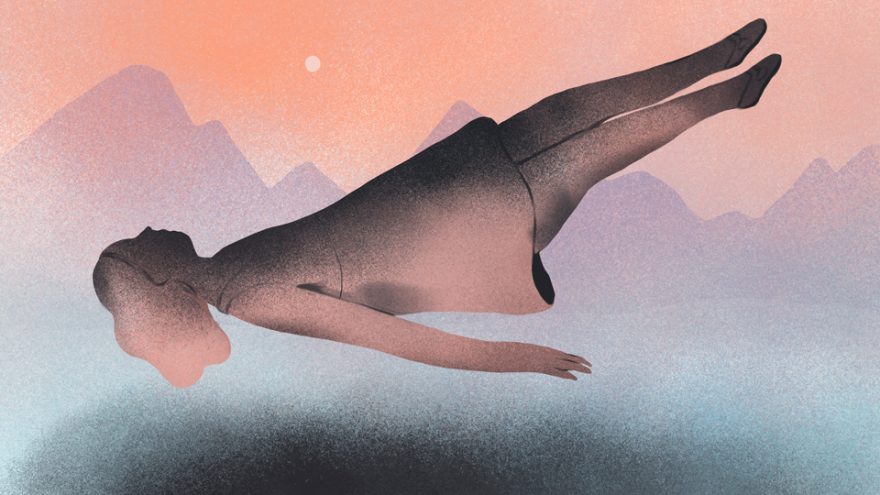 After a teenage girl’s father goes off to yet another Buddhist retreat and from there disappears, the girl gets herself to her dad’s last known destination, a high-altitude “contemplative community” that everyone calls the Levitation Center, because “according to legend, it was the only bit of land left in America where levitation was still possible.” She may not exactly be searching for her dad—her motivation at first seems opaque, maybe even to her. But in The Lightness, an excellent debut novel by Emily Temple ’08, the girl, whose name we’ll eventually learn is Olivia, will probe mysteries, get tangled in desires, step close to the edge of a several-dimensioned abyss, and have her life permanently changed.

She is already changing and searching when we meet her. Before he vanished, Olivia’s dad introduced her to meditation, much to her mom’s disapproval, and now she’s come to the Levitation Center for a summer program: “Special Teen Retreat: Becoming a Warrior in Body, Mind and Heart.” The other enrollees are girls who’ve been in trouble, or are trouble: “They were shoplifters and potheads, arsonists and bullies, boy crazy and girl crazy, split and scarred. They were, some of them, cruel. They were, more of them, angry.”

Olivia is right away drawn to, and warned to stay away from, a trio that centers on Serena, a girl who lives apart in a well-appointed tent and has a magnetic allure and unexplained special status. Serena recruits Olivia to join their group, then draws them all into a cryptic quest that feels dangerous and seems to focus on achieving levitation, though Serena may well have different motives that she’s not about to share.

At the core of the story, Olivia herself is an ever more appealing character. She’s gutsy enough to explore what is happening, both outside of her and inside, even as her confusion deepens; and she’s strong enough—or learns she’s strong enough—to stay grounded as the girls flirt with deadly risk and her own trauma demands to be faced, and as the further reasons for it float to the surface of her opening awareness.

Temple’s way of unfolding this story is episodic and evocative, and she blends into the narration a succession of Buddhist sayings, legends, and traditions, plus nuggets from world myth and folklore. At a time in American and Western culture when Buddhist concepts and practice are the focus of a wealth of good books and articles and dharma talks and more, The Lightness deserves to stand apart: it makes westernized Buddhism burn on the inside of these wounded girls and their search to find meaning and survive. It’s a first novel, and the writing can sometimes veer from intriguing toward perplexing—but Temple has taken real risks in building the story, and her book is already earning some well-deserved praise.