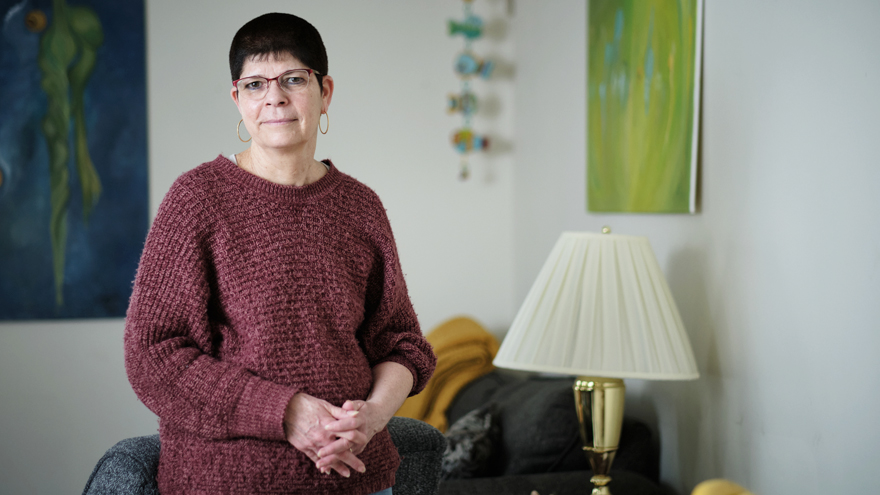 Each summer, for the past several years, Michal Strier, a Professor of Hebrew, has traveled from her home in Arad, a small city in southern Israel, to teach research methods to master’s and DML students at Middlebury’s School of Hebrew.

This year, though, Michal will have spent the undergraduate year in Vermont, teaching at at the College. We recently spoke to her about this new experience, a conversation that touched on her career, the idea of a “democratic” school, education in the States and Israel, and, of course, her impression of winter in Northern New England.

What have you been teaching this school year?

This year, I taught mostly 200-level Hebrew classes, and a few students in 101 and 102 classes. I also taught someone who is high-level in Hebrew, but it was an independent study, just her and me. Also, starting in J-term, I began leading a Hebrew Club on Monday afternoons for whoever wanted it, no matter the level. We started with four students, and now we have six. It’s not obligatory. They just want to learn Hebrew and talk a little Hebrew and do things in Hebrew. And usually I bring cookies and cakes for them.

Is that an extra incentive to get students to drop in?
Well, I like to bake, so I need someone to eat it. My husband and I, we can’t eat everything!

How did you get into teaching?
My husband and I established a very unique school 20-something years ago in Arad, where I grew up: we opened a free democratic school called Kedem. It belongs to a string of democratic schools. It’s a school for children from the age of three till the end of high school. It’s like a family, it’s multiage, and you don’t learn by classes. The children decide what they learn, how they learn, with whom they learn.

We opened the school in 2000. We just wanted a school for our children where they would love to learn, where they would love to go to school. When we look back, we see that we actually established a community, like a kibbutz. I didn’t have the patience to wait for someone else to do it, and no one else wanted to. We decided there was no time, so we did it.

How does the democratic school model work?
There are rules. The children make decisions together with the community—parents are also invited. Every week there’s a parliament. People suggest rules and everyone votes about it and talks about it. Even children from kindergarten can speak at the parliament and suggest rules. It’s from very simple daily stuff to voting on the budget. It’s everything except what to learn or not to learn, because everyone can learn everything.

The model started in Poland with Janusz Korczak, a Jewish educator and doctor and journalist. One of his famous sayings was “The children have a right to die.” He didn’t mean it in a macabre way; he meant for adults to stop telling children “Don’t do this, don’t do that, because you might die.” So they climbed trees and did whatever they wanted.

A.S. Neill did something similar in the 1920s in England. His school is alive and kicking today. If you search for “Summerhill” on YouTube, you’ll find lots of movies about it.

Did you always want to be a teacher?
I never wanted to be teacher. I wanted to be a graphic artist. But for my children, when we started this school, I decided I had to have at least a teaching certificate. I studied intensely to get three years of study into two years.

I was the principal of the school when we started it, and for about eight years after that. After I stepped aside, I went on teaching part time, and I started working at Kaye College for Academic Education, a training college. There, I worked at a center that tried to help communities and educators establish youth programs for citizenship and involvement in the community. I finished my master’s in public administration and nonprofit management at Ben-Gurion University. I kept working in the college because it was nice. Also, they needed someone to deal with their website and social media. I said, “Okay, for a few months until you find someone.”

I have an idea where this is going.
[Laughing] Yeah, that lasted for a long time, many years. I also helped with their fundraising, something I did for the democratic school. And I learned for my fun, but for them too, how to build websites, and they used my graphic skills.

What was Kaye College like?
It’s in Beersheba, in the south of Israel. What’s interesting is there are lots of Bedouin settlements in the south. Even in Arad there are Bedouins and there are Muslims and there are Jews and there are Christians. We have refugees from Sudan and Eritrea. And in this college, it was almost half Bedouins. It was a great existence, because you could see how coexistence really works on a daily basis. Even the language of the teachers in the staff room, you’d hear Arabic or Bedouin teachers speaking among themselves in Arabic with Hebrew words in it. And you’d hear the Jews, the Israelis, the non-Arabic teachers speaking Hebrew among themselves, and you’d hear Arabic in it. All the languages were mixed.

Did you go beyond your Master’s degree?
Yes, I did my PhD, also at Ben-Gurion University. I got my doctorate in the field of political socialization. It’s not political in the sense of political parties. It’s about being aware and involved and caring and being part of the democratic system. What I was interested in, because of the democratic school, was trust. Trust the children, trust the parents, trust the teachers, and you trust them to make very important decisions, and you trust them to take care of themselves, but you also trust them to call you if they need help.

Rabbi Danielle said you come from a very creative family.
I used to paint in oils and stuff like that. Before I became a teacher I studied graphic design. My mom was a teacher, but she was also a graduate of Bezalel Art Academy in Jerusalem. She taught me calligraphy and drawing. Now my passion is animation.

My sister is an artist. She has taught beginning Hebrew at the Language Schools, and she taught art to everyone. My daughter is a pastry chef, and my son is a musician. I’m not modest about it: my son is a very good musician. He plays any instrument you can think of. He plays with the most famous band in Israel, Hadag Nahash.

What is your impression of Vermont?
I love Middlebury. Middlebury is like arriving to quiet and peace, and it’s an amazing, beautiful place, with very friendly people. We come from the desert, beautiful desert. But here everything is green and there’s lots of water. It’s amazing. So beautiful. I can’t stop taking pictures.

What did you think of our long Vermont winter?
It wasn’t long for me. I’m like a child, you know. I look at the snow and I’m like, wow, it’s so beautiful. And every snow is different, and it’s amazing. It’s so beautiful.

People warned me about the cold. I said, “What can I do? I’ll dress warmer.” And I realized it’s actually colder for me in Israel, because there I don’t have the right clothing or the right boots. And our houses aren’t warm enough over there. But on the other hand, in the summer in Israel, everyone has air conditioning. Here, it’s really difficult because there isn’t much air conditioning. And the mosquitoes are the worst.

Are you doing any other extracurriculars besides the Monday Hebrew Club?
Yes. I did an art class, because students asked for it. And I did calligraphy once. We are always talking about Israel during these classes, so now we’ve started kind of a series of Zoom lectures on different subjects in Israeli society. People are always talking about the Israeli-Palestinian conflict, so there’s no need for me to do that too. I try to talk about some other things that are in Israel. You know, it’s not only the conflict.

And I always invite students to my home, because my husband is an amazing cook. So when they feel in need of a home, I invite students to come over for dinner or breakfast or lunch or a cake. They asked how to do falafel and pita and hummus, so we’re doing that tomorrow. And we’re starting something on Thursdays—not only for the Hillel students but for whoever wants to join. We’ll meet and we’ll just talk or see movies and talk about Israeli art and Israeli music and any questions that come to mind concerning Israel. And not necessarily in Hebrew.

If people from Hillel or people who have connections to Middlebury and to the College and to the town have ideas they think I can help with concerning Hebrew and Israel and art, then they’re invited to approach me. I’m not formal. Totally not formal. And I love new ideas.

It has been fascinating talking to you. Your curiosity and love of learning are palpable.
One of my mother’s friends, she’s a very funny old lady, once she told me, “A good day is a day that you learned something new, you laughed, and you did something good for someone else.” And I don’t know why it stuck in my head, but whenever that happens, I say, OK, I can check that off.

I have to learn things all the time; the day that I don’t learn something new is a really boring day.