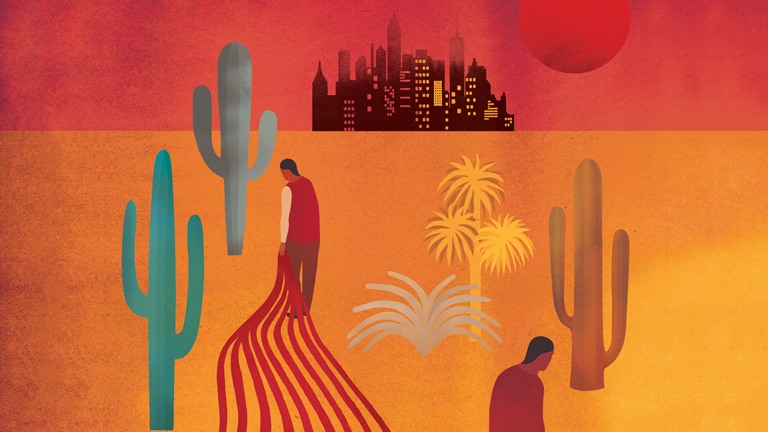 When Lauren Markham ’05 first meets the Flores brothers, they have just missed an important court date to determine their future in the U.S. Ernesto and Raúl are 17-year-old twins from El Salvador, two of the hundreds of thousands of unaccompanied minors who have made the harrowing journey from Central America through Mexico to the U.S. The brothers are fleeing poverty and rampant gang violence in the wake of El Salvador’s brutal civil war; Ernesto has received death threats. Their parents, poorly educated subsistence farmers, have borrowed the unimaginable sum of $14,000 to pay “coyotes” to guide the boys north to California, where their older brother Wilber lives. Miraculously, they survive long bus rides, packed trucks, filthy safe houses, a raid, and a terrifying few days stranded in the desert to reach their brother—only to have Wilber get lost driving them to the San Francisco courthouse. Now they’ve missed their chance to plead their case before a judge.

As a counselor at Oakland International High School, which the twins attend along with migrant children from more than 30 countries, Markham is called in to help. Against all odds, she finds the boys a lawyer they can afford and guides them through the bureaucratic morass of the immigration system. In the process, she unravels a poignant, timely, and illuminating story of desperation and hope.

Fortunately, Markham is an experienced journalist who has spent years covering refugees. And in The Far Away Brothers, she masterfully combines her skills as a sharp-eyed reporter with her immigration expertise. With the twins’ permission, she spent two years tracing their journey from their home in La Colonia to Oakland. Over hundreds of hours, she interviewed the boys, their family members, and anyone else she could find who interacted with them. She toggles between the “far away brothers” in California and the suffering family back home, weaving in well-researched set pieces about gang violence in El Salvador and detention centers in Texas that heighten the urgency of the central narrative.

Like all good reporters, Markham refrains from editorializing and offers no solutions to America’s immigration crisis until the afterword. She simply relays the facts, neither sensationalizing nor whitewashing the Flores brothers’ odyssey. Though they eventually gain legal status in the U.S., there is no happy ending: the twins are hardworking and sympathetic, but they also drink, skip school, and buy themselves iPhones with the money they are meant to send home. In laying bare their story, Markham reveals the complex humanity of the dispossessed, which no government policy can touch.