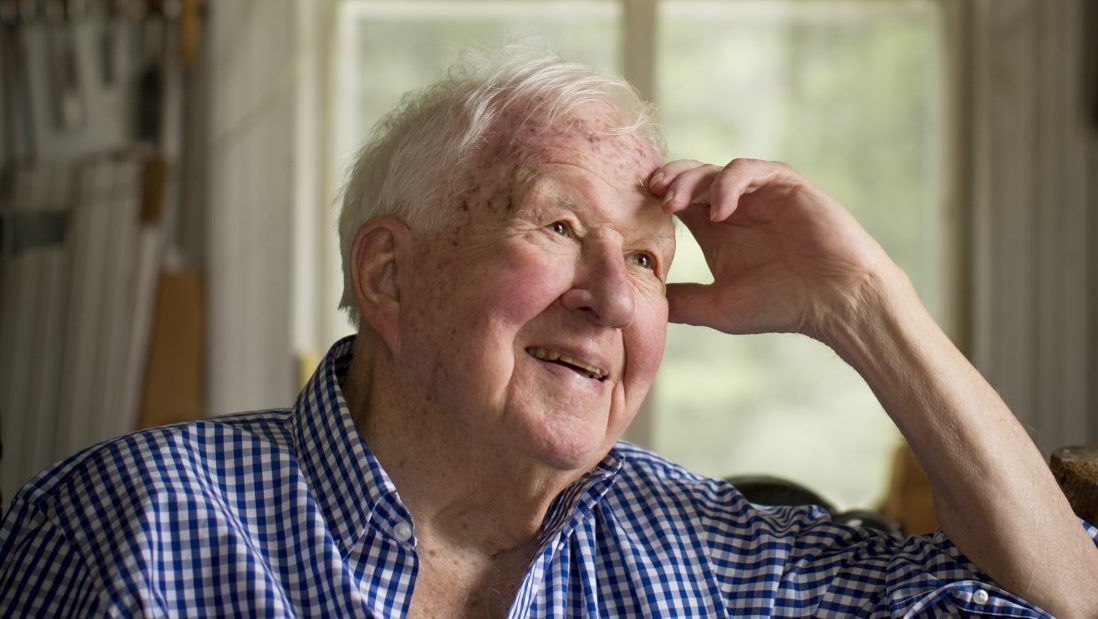 When John Cross ’58 was working in the advertising business as a copywriter, he often traveled to Los Angeles for video shoots, where he’d sit on hand for rewrites. In later years, people occasionally approached him, recognizing him from those shoots. But Cross never recognized them. “When I was on those shoots, I didn’t look up,” he says. “I was carving.”

These days his carvings are on display at major American museums, and they sell to collectors for north of $5,000 apiece. But becoming an established folk artist was his second life. His first was as a Manhattan ad man.

Cross was born in New Jersey, but his father, an energy-utility executive, moved the family to Montreal when Cross was 12. There, he took an interest in art thanks to the carved soapstone figures he’d see in local Canadian souvenir shops. He wanted to go to art school, but his father forbade it. So he settled on Middlebury, which he knew about from his Canadian classmates who played hockey.

At Middlebury, Cross majored in economics and earned a scholarship to the graduate business school at the University of Chicago, which led to his long career in Manhattan advertising. As a creative copywriter, he came up with slogans for brands like Crest and Scope (“Stop badmouthing New York City” was one of his).

He never strayed far from art—he married a painter, Linda—and he first began sculpting when he “borrowed” 10-foot beams from a construction site in 1972 and hauled them over his shoulder to a studio he had rented ($100 per month) across from the Strand bookstore.

Those early creations were huge, abstract structures. They got him his first art gallery show, but he quickly transitioned to the friendly human figures he carves out of sugar pine. (Why sugar pine? “It’s reasonably soft, but still holds a face or hands.”)

The best word to describe his art may be Americana. Some of his carvings depict real people like Pavarotti, Woody Allen, Groucho Marx, and Babe Ruth. Some capture cultural events like a Miss America pageant, or the Rockettes performing. Some show recognizable stock types, like a horse jockey or a diver.

His most iconic or representative works include his Negro League baseball players and his four “regular Joe” men playing cards (see page 9). But Cross’s own favorite is American Beauty, a large, bikini-clad woman covered in tattoos of American symbols like the bald eagle, the “Don’t Tread on Me” snake, and “God Bless the USA.”

“I was very fond of my youth,” he says. “When I moved to Montreal, it was heart-wrenching to leave this country. I was an American.” His classmates in Canada nicknamed him “Yank.”

When Cross worked as an ad writer, he would bring a small Swedish carving knife on flights from New York to LA, and five or six small chunks of wood, and he’d carve in his seat. One time a man sitting near him casually remarked, “You shouldn’t have a knife on an airplane.”

Today, if you look around the home John and Linda share on 75 acres of farmland in Elizaville, N.Y., there’s little trace of the ad man. It’s the house of two American artists: John’s figures stand on every shelf and in every nook in the house, and some pop out from the wall on metal rods; Linda’s mixed-media paintings adorn many of the walls.

And at 81, he’s still carving. Although he walks with a cane, his hands are steady and don’t tire easily. On any given day, he carves in his studio while Linda paints down the hall in her own room. After a while, he’ll amble over to her space, sit down quietly, and watch her work as he sips a glass of wine. “It’s a nice life,” he says with a grin.

Daniel Roberts ’09 is a business journalist at Yahoo Finance in New York City. Cross, miraculously, still owns a small soapstone seal carving that he bought in Montreal when he was a teenager. The piece is representative of the Inuit carvings that abounded in Canada and that inspired him early on. “The Inuit stuff was marvelous work,” he recalls. “That was the good stuff.” The seal sits on a bureau in his bedroom.

In Montreal, Cross was an avid canoer, and he continued to spend his summers canoeing in Canada while he was in college at Middlebury. He doesn’t canoe anymore, but one of the barns on his property in New York is full of old canoes—one of them, the oldest, is a 1929 Old Town canoe he cherishes. John and Linda lived for 40 years in an apartment building in New York City, and sculptor Bill King was a neighbor. He encouraged John to pursue a career as a sculptor and suggested John use one of his studios. A well-known artist in his own right, King was a true mentor, and John made this carving of him at work.