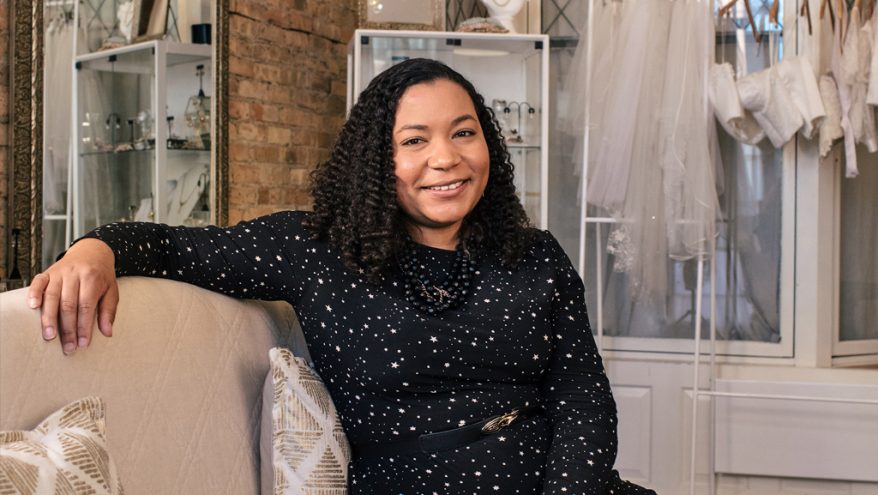 Kpoene’ Kofi-Nicklin ’02 is in a loft on Chicago’s West Side, steaming the wrinkles out of a long tulle veil. A photographer bustles by, preparing to take pictures of a model wearing bespoke wedding gowns designed and sewn by Kofi-Nicklin. The pictures will eventually be posted to social media. The dresses hang together on a rack like a shimmering cloud. Kofi-Nicklin’s wife, Anne Nicklin, appears and asks if she needs anything before the shoot begins. The designer absentmindedly declines. Unexpectedly, she brings up Iceland.

Last July, Kofi-Nicklin traveled from Chicago, where she owns and operates the high-end custom bridal boutique Mignonette Bridal, to southern Iceland on a “black girl magic trip.” Frustrated with the dearth of women of color in bridal fashion and media, Kofi-Nicklin convened with like-minded stylists and photographers—themselves all women of color—to take cinematic, art-directed images of a black model wearing Mignonette gowns. As they photographed the model in front of lush Scandinavian hillsides, icy rivers, and crashing waterfalls, passing tourists were intrigued and excited by the scene. “Nobody was looking at the beautiful natural wonder we’d all come to see,” says Kofi-Nicklin. “Everyone was looking at [her].”

In a wedding industry now dominated by social media—according to 2016 surveys by wedding resource the Knot, 62 percent of brides use their mobile phones to browse for dresses, and 70 percent find wedding inspiration on social media—Kofi-Nicklin has positioned herself not only as a designer and shopkeeper, but also as a self-starting fashion editor, digital marketer, and online entrepreneur. In 2017 alone, she organized additional trips to Amsterdam, Paris, and Toronto for photoshoots of her gowns, and lent dresses to photographers around the world for their own editorial photography. The meticulously styled, aspirational images from these excursions filter through Instagram and Pinterest, where tags lead brides right back to Mignonette’s own Instagram page and Etsy shop.

Fashion and the Internet converged organically for Kofi-Nicklin, who moved to New York in 2002 after graduating from Middlebury, where she studied English literature and women’s studies. As a student, she picked up sewing in the Theatre Department’s costume shop, repairing and designing costumes for dance productions and plays. She had learned fashion illustration and design theory in a costuming course at Midd, and in New York decided to enroll in design classes at Fashion Institute of Technology. She lived in Brooklyn and fell into a collective of designers who were building the momentum for a soon-to-be-global handmade movement and the kind of DIY online retail that launched Etsy in 2005.

Kofi-Nicklin and Nicklin, an architect, met in New York and lived briefly in San Francisco. They were married in 2009 in Montréal, and photos of their romantic ceremony can still be found on wedding blogs. Kofi-Nicklin designed and made her own gauzy dress: “My gown lives here in the store, and every time we finish a custom gown I put a little bit of my dress in the hem. That’s their ‘something old,’” she says.

The couple settled in Chicago in 2011. Nicklin, an expert in sustainable building practices, designed the Mignonette boutique, an elegant atelier that’s “like a little jewel box,” says Kofi-Nicklin. In early 2018, Kofi-Nicklin will move Mignonette’s showroom to downtown Chicago and the existing space will become a spin-off business, Ette, dedicated to wedding gown alterations, including the restoration and restyling of vintage dresses. She also recently launched a line of ready-to-wear bridal skirts, based on a pattern of hers called the Gris. “When I first started the label, I had no idea how I was going to reach people,” says Kofi-Nicklin. “Now all I have to do is pick up my phone.” 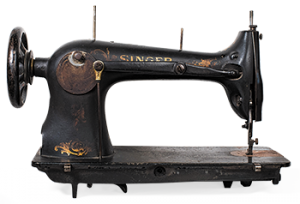 A Thread to the Past

As she planned to open Mignonette, Kofi-Nicklin frequented estate sales around Chicago, collecting antiques for the shop. An advertisement for a sale in Palatine boasted that it was a “dream” for sewing enthusiasts. Skeptical, Kofi-Nicklin decided to check it out on the last day. She met the daughter of Italian immigrants who had been local tailors. The daughter was selling her parents’ vintage European fabrics, studio furniture, and 1900s-era sewing machines, including the Singer model pictured here. “I bought everything,” says Kofi-Nicklin. “I even have their wedding photo.” Over time, the Italian tailors have become like patron saints to the designer and seamstress. “They set up the sewing business, and they started from pretty much nothing,” she says. With their machine in the store, she feels as though she has “someone watching over me.”

Soon after Kofi-Nicklin graduated from Middlebury, her mother gave her her first pair of professional-quality sewing shears as a token of encouragement. “Even though we use them every day, they take pride of place in the studio,” she says. “They hang on the wall. Everything I cut with [them] turns out to be the most perfect thing.”

Kofi-Nicklin’s mother also passed along her love for Edith Wharton. “I read The Buccaneers when I was probably in junior high,” she says. She often quotes Wharton in the captions of bridal photos that appear on Mignonette’s Instagram account. A favorite is, “There are two ways of spreading light. To be the candle, or the mirror that reflects it,” from Wharton’s poem “Vesalius in Zante. (1564).”