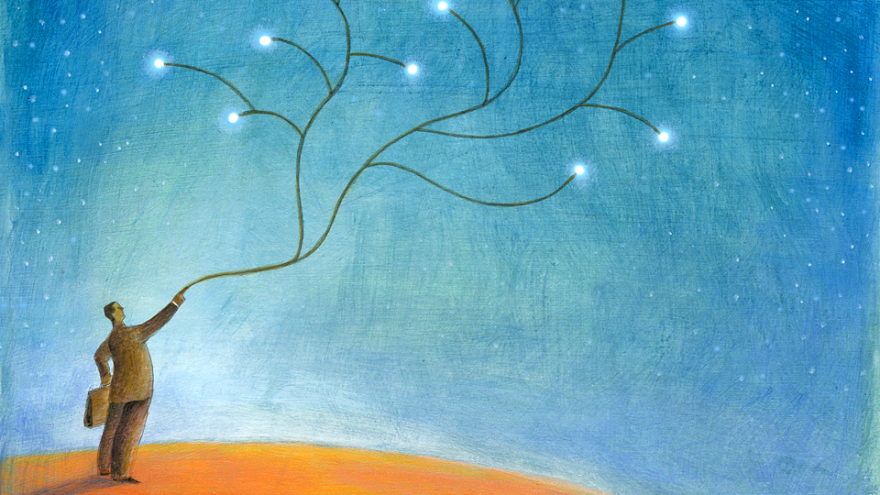 Ask Howie McCausland, “What do you do?” and he’ll probably tell you he is a longtime Vermont emergency medical technician who loves books and trout fishing.

It might take a few minutes of chatting before he reveals that other thing he does—or did, until July, when he retired from Middlebury as director of network design and operations. Over his 33 years in Information Technology Services (ITS), McCausland helped push Middlebury to the technology forefront, building out network infrastructure and, in fact, putting Middlebury on the map as one of the first two sites in Vermont, along with UVM, to connect to the Internet.

When I spoke with McCausland a few weeks before his retirement, he told me he hadn’t initially planned to pursue a career in IT. He got into computers while doing physics research at Harvard, where he obtained a degree in astronomy and astrophysics. He went on to the Harvard Smithsonian Center for Astrophysics where he did, as he called it, “computer stuff in support of space programs and orbiting telescopes.”

He was working as the “network guy” at Harvard when the idea of the Internet was just developing. “There was no Web,” he said. “This was before the Web. This was before there was such a thing as a dot com anywhere. In fact, it was before most anybody was using the word Internet.” Working with the National Science Foundation, however, McCausland and some colleagues built what grew into the New England Academic and Research Network (NEARnet), which linked Harvard with several other colleges and universities in the region.

But McCausland was growing tired of Boston, where he had lived since the early 1970s. He and his first wife fled the city on the weekends in favor of outdoor pursuits in northern New England. “I needed to be near trout streams and mountains,” he said. He sent his résumé to colleges all over New England and in 1989 was hired at Middlebury as assistant director of academic technology. McCausland saw it as an opportunity to do the sorts of things he had done at Harvard. “There was no Internet technology at all,” he said, referring not only to the College but to the region. “There was nothing in Vermont.”

When he arrived, Middlebury had two separate computing systems: academic computing, which included the new Ballinger Computer Lab in Voter Hall, and administrative data processing; years later, the two merged, in an effort McCausland likens to the reunification of Germany. There was “an itty-bitty network”—a single link from Voter to Warner Hall, connected by coaxial cable (keep in mind that at this point, wireless technology was still nearly two decades away).

But McCausland immediately started working on plans to build a high-speed, campuswide network and connect Middlebury to other schools. The need for such a system, however, was lost on some in the administration. McCausland recalled a day when he and his supervisor, David Dexter, met with the president’s staff for lunch at Mister Up’s. “Olin Robison was the president at the time,” he said. “And he turned to me with this quizzical look on his face and said, ‘I’m not understanding this. We just built this fancy, shiny new computer center at great expense. Why do we need a network?’”

To explain, McCausland used the example of telephones, saying you wouldn’t make everyone go to the same building to make phone calls; you’d want them to have telephones at their desks. Referring to Robison, he said, “Over the years, he came around, and he understood it when he was still here. But it was a long and interesting project.”

McCausland and Dexter secured a $30,000 grant from the National Science Foundation and forged ahead, linking the College to NEARnet, the Northeast connection to what later became the Internet. In the early 2000s, they got serious about extending the campus network to every building on campus. They took advantage of construction projects whenever possible, running conduit, for instance, when water lines were dug up and installing  jacks in dorm rooms and offices during renovations.

At times, McCausland faced opposition for his forethought. “I often had a cultural conflict with people,” he said, “because I had this vision of taking it seriously and building our campuses as though we were a Harvard or an MIT and investing in infrastructure that we would want, and then finding savings later as a result of that.” He gave as an example his insistence on running next-generation optical fiber cable—used exclusively today—at the same time as the cable that was in use then, a move that he estimates saved the College millions of dollars in labor costs. “Most of our peer institutions had to rewire their outside plant infrastructure in the first decade of the millennium. All we had to do was put ends on the cables.”

Looking back, he’s proud to have fought for the latest technology. “Compared to our peer institutions, we’ve had a pretty robust architecture over the years that’s migrated through many different generations of technology and has left us well positioned.”

Since McCausland’s arrival in 1989, ITS has grown to dozens of employees; he said he went from being a big fish in a little pond to a minnow in an ocean. “When I started here,” he said, “it was possible for one person to know everything there was about all of the academic computing and all the computer systems and all of the software and everything that was going on. I could hold all of that because it was so small. Now it has become vast, and none of my peers hold all of it.”

Perhaps his move from big fish to minnow is a sign of the department’s success. It means McCausland has accomplished what he set out to do back in 1989. “I came here thinking this would be a place where I could build something, and over the years, we built something,” he said. And now he feels comfortable stepping away. “I’m leaving, in part, because I’m no longer needed.”

McCausland has more important things to do, anyway. While he is passionate about his work at the College, he said, “My calling, what I live for, what I think of as ‘what I do’ is the EMS work, which I’ve been doing almost as long as I’ve been at Middlebury.”

McCausland moved with his family over the mountain to Waitsfield a decade ago; there, he’s an advanced-EMT and crew chief of the Mad River Valley Ambulance Service. He’s also part of the leadership of the district that covers the Montpelier-Waterbury region. He will continue to work three 12-hour EMT shifts each week, a schedule he held, thanks to an accommodating ITS Department, while working full time at Middlebury.

He helped found the Emergency Response Team at Middlebury College and worked closely with Middlebury Regional EMS. He is a state-certified instructor in many different areas and has taught CPR at Middlebury Union High School and at the College. He was deeply involved with the COVID response and was part of the team that made home visits to administer COVID vaccines to shut-ins. (After all, McCausland said, EMTs are “the last surviving house calls in the medical world.”) And for the past few years he has been running classes to train new EMTs, in the process discovering a deep love for teaching.

He was recently honored for one aspect of that teaching, although he didn’t mention it in our conversation. His colleague and good friend Rick James, however, told me that in May, the Vermont Department of Health named McCausland the 2022 Vermont EMS Children Champion of the Year for his work on the team that trains EMS volunteers in pediatric high-performance CPR.

McCausland said he will miss his coworkers—especially James, with whom he shares “a very sarcastic and dark sense of humor.” But he’s hardly distraught about retirement. “Students at Commencement are excited about the next thing that they’re going onto.”

Similarly, he is looking forward to the time he will now have to devote to his EMT work and teaching, as well as his many hobbies. And he’s happy to leave computers behind; for the record, outside of work he avoids social media and has never had so much as a Facebook account. He said he was grateful for the adventure he’d had so far, but he assured me with a grin that retirement would not find him bored or without purpose. “I’m just getting started,” he said.

If there was any doubt that McCausland would use his retirement for good things, Rick James emailed me in early August with an update he had received from a mutual friend of theirs. On an EMS call on his last official day at Middlebury, which McCausland had taken as a vacation day, he had revived a patient in cardiac arrest. The patient is now doing well and recovering.