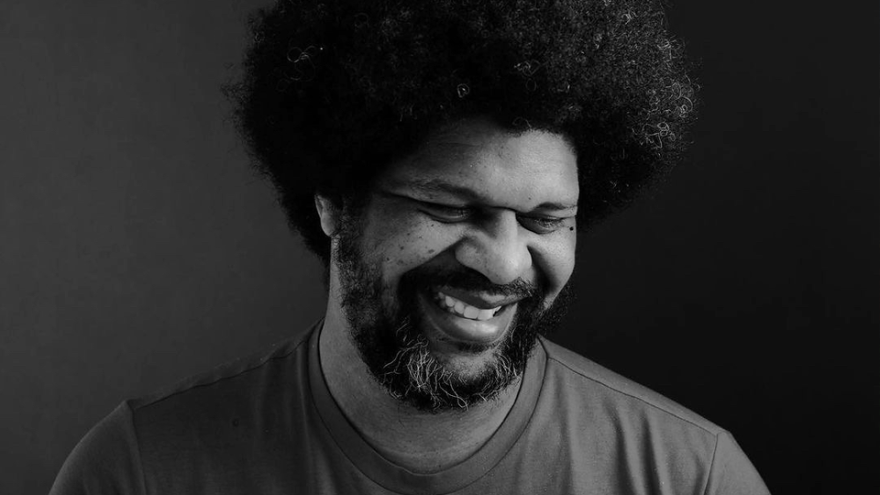 The past two years, during the COVID pandemic, have been a time of stress and sorrow for many people. But in some ways, the unusual circumstances have also provided a time for reflection. Matthew Evan Taylor, assistant professor of music, used the time for exploration of his art.

“With the lockdown, I began a process of giving myself permission to be who I am musically. People know me as an improvisor, but in the past I would put it as a secondary thing. I’m a composer and an improvisor—I got this other thing here that some people think is cool, but other people are scared of.” He laughs.

But it was improvisation that spurred his project Postcards to the Met. Several years ago, he conceived of a plan where he would find random places to play his saxophone and he would record himself. He would send the recording off to friends who would then find random places to play and send a recording back to him—as if they were exchanging postcards. Taylor wanted to see how different the two environments sounded from each other.

In the meantime, the Metropolitan Museum of Art’s Live Arts Department and the Metropolis Ensemble, an avant-garde orchestra led by Andrew Cyr, began talking with Taylor about doing an evening-length work to commemorate celebrations of the spring; it was intended to premiere in March 2020. When that event didn’t happen, a conversation about doing the piece resumed in early 2021, and plans were made to premiere it in March 2022. Taylor explains, “But we needed to do something in the meantime to help with content for the Met Live Arts and generate interest in the evening performance itself. That’s when I presented my postcards idea.”

In the brainstorming sessions that followed, the idea transitioned into something other than what Taylor had envisioned. The original plan was for Taylor to improvise in outdoor locations and be videotaped once a month for the 12 months leading up to March. But as he says, “Quickly, practicality caught up to creativity.” The postcard idea had evolved into a more complex project with more of a structure than he’d originally thought, even though the goal was still to produce a series. But in the end, the main element was that he would be improvising an introductory piece and sending what he called “the greeting” to other musicians, who would then respond with their own musical creation. The plan was to interact in the postcard series with the musicians who would be a part of the full-length evening performance slated for March.

Taylor was excited to be working with the talented members of the Metropolis Ensemble orchestral collective and the South Asian jazz collective RAJAS, led by Rajna Swaminathan. And contrary to his first conception of the postcards, it wouldn’t be two artists improvising freely without any kind of feedback from each other but rather a more scripted series. He realized some ensemble members weren’t comfortable just improvising but needed more instruction.

“I decided I would improvise my performance, but then I would create scores for each postcard, laying things out in a way that could at least visually give the other musicians an idea of what they could do around what I was playing. Some of these scores are kind of conventional, others are pretty wildly graphic, and then others are text-based with a few notes written here and there. For each postcard, the language I used was specific to the person I was interacting with on that product.”

Each postcard took a team to produce. Taylor hired Sam Kann ’21 as his videographer, and she offered good editorial advice on the video. Andrew Cyr managed the finances of the whole project and hired other team members, including Chris Botta, who was the sound and visual editor. While Taylor would do a lot of the musical editing with feedback from others, including Cyr, Botta would need to figure out how to edit the video together to reflect the musical flow and come up with an interesting visual palette. Another visual bonus was the addition of art created by the Juniper Creative team, which includes artist Will Kasso and Jennifer Herrera Condry. As a finishing touch, Taylor was asked to write a note about each postcard. He was inspired to write poems. “That was a fun little creative offshoot that I wasn’t expecting,” he says.

The entire project, from the postcards to the evening performance, ended up being a complementary combination of Taylor’s musical talents as improvisor and composer. Even while he was creating his improvisations for the postcards, he was working on the final performance, his postcard work inspiring his composition. “I really had to work hard at giving myself permission to do things in different ways. I was kind of hung up on trying to create a piece that was directly echoing the postcards, following some sort of similar trajectory.” He realized that wasn’t the way to go. The postcards were more for reference. “Kind of like when I was trying to read Latin in college. Just keep the Latin dictionary and the Latin text open side by side and go back and forth.”

Throughout both the postcard series and the creation of the evening performance, Taylor and his collaborators were exploring African American, South Indian, and Western European musical practices. When Taylor began to think about the foundation of the long piece, he decided he wanted to see what it would be like to have a drone, or a low note that plays for a long time throughout the composition. South Indian performances are supported by drones, so it seemed a good fit. For the more active, unpredictable part of the performance, his reliance was on improvisation from the ensemble. The intent of the piece was meant to be a celebration of the return of the light and life of springtime. The narrative structure would begin with the unordered, improvised first movement with no meter for the audience to grab onto, reflecting the unsettling darkness of winter; then it would become more celebratory as life and light returned.

In the end, Taylor feels like he has succeeded in what he was trying to accomplish as a musician. “It’s an hourlong piece, the longest I’ve ever written, and it contains so many things I hear in my head. It’s guided by so many principles that I’ve developed about music creation and about improvisation.” On the practical side, creative length is not so daunting for his writing as it would have been in the past. And he has evidence now that people are going to take his writing and creativity seriously. For him, it’s a milestone.

He’s not sure the isolation of the pandemic was solely the reason he has reached this point in his musical life, but he feels it accelerated the process. “Something that is little taught but that is vital to sustaining our creative life is the ability to adapt quickly and to change with the times. You’re disrupting in a way that you can sustain yourself and you can become a new model for others. So, yeah, this has been a really fruitful time for me.”