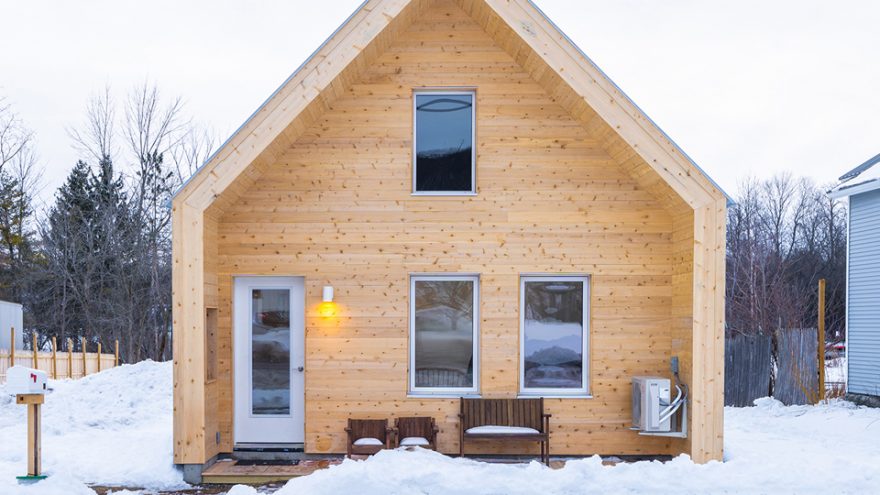 A student architecture project aimed at making a dent in the affordable housing crisis has won a major award from the American Institute of Architects’ New England Region. AIANE presented the design award for excellence in architecture to the Habitat for Humanity project, which included students, the local Habitat chapter, and McLeod Kredell Architects.

“For me this project had everything,” noted one of the judges at the virtual gathering on Sept. 25. “It was very economical, there were students, they created a prototype; the prototype was adapted based on the needs of the users; the users participated in the construction so that they were one with the house. And it’s beautiful—very simply and elegantly done.”

As they toiled for semesters designing the perfect home, the students never lost sight of the affordable housing crisis driving their work. The project wasn’t theoretical—they were designing real homes for real families in Middlebury, Vermont.

Their challenge was impressive: Design a beautiful, high-performance home that met the state’s highest standards, and, of course, was affordable.

“In my opinion, if architecture can’t help tackle the biggest challenges of our society, it’s not worth much,” mused John McLeod, associate professor of architecture and a partner in McLeod Kredell. “Affordable housing is one of the greatest challenges facing our society, both in Vermont and nationally. It’s a communal, moral, and economic issue.”

According to the National Low Income Housing Coalition’s 2020 “Out of Reach” report, full-time minimum wage earners cannot afford a two-bedroom rental in any part of the U.S., nor can they afford a one-bedroom in 95 percent of the country.

The national trend holds true in Addison County where about 10 percent of the population lives in poverty, according to the Addison County Community Trust. Many more who don’t meet the definition of poverty—yet fall below the county’s livable wage scale—struggle to find affordable housing.

The undergraduate team navigated not only the design process, but a maze of budget, code, and permitting challenges inherent to any building project.

“Working on this project has helped me to see how architecture, designed with intentionality, can have the power to shape and transform our communities,” said Orli Schwartz ’20, a member of the design team who continued on to help build the house. “Throughout its entire process, this project has served to connect and bring people together,” she said.

By any measure the project was a success, due in large part to the team’s persistently thoughtful design. The two long, narrow houses are staggered on the lot to give each a view of the sidewalk and street to the east and the wooded land to the west. McLeod says the modest scale and gable profile were meant to integrate the houses within their historic neighborhood, while the “taut forms and clean materials confirm that these houses are new and forward-looking, made special for their occupants.” The exteriors are clad in standing seam metal and local white cedar boards, and the interiors are bright with numerous windows and vaulted living-dining-kitchen spaces.

One family now enjoys the light-filled home on Seymour Street in Middlebury. And a second will eventually move into the matching home that is currently under construction on the same lot.

“When I attended the groundbreaking ceremony for the first of the two houses, standing there, with the family’s three little girls running in circles in the staked footprint of the house, I was awestruck,” reflected Schwartz. “Thinking about how much the home I grew up in has had an impact on me, I feel so lucky to have been able to have the opportunity to help design and build the home that this family now calls their own.”