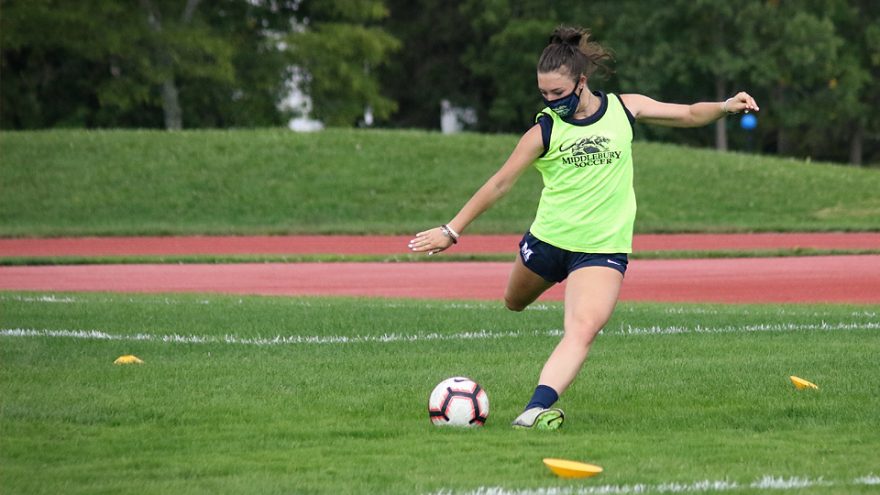 This week, our colleagues in Athletic Communications caught up with Elise Morris, a junior on the women’s soccer team. Elise, who is majoring in neuroscience with a minor in Spanish, is heavily involved in sexual assault prevention and awareness on campus, and she spoke to Ali Paquette about this critical issue.

How did you become involved in sexual assault awareness and prevention work?

I’ve always been passionate about social justice issues. I became especially focused in work with gender-based violence when I was in high school. During my sophomore year, my best friend disclosed to me the childhood sexual abuse she had experienced. My fight against sexual violence hasn’t stopped since.

What type of sexual assault awareness work did you do in high school?

I started my high school’s Sexual Assault Awareness Club. Our focus was to create a safe space for survivors while also addressing rape culture in our school. We changed our school’s racist and sexist dress code policy and began working to implement a now-state wide legislation for mandatory K-12 sex education in all public schools.

Tell me what you’ve learned while doing this work.

I continued this work when I got to Middlebury by joining the Sex Positive Education College Style (SPECS) group and Student Government Association’s Committee on Sexual Relationship Respect (SRR), and working with my own team to address complicity within our own culture. Through this process, I have come to realize how pervasive gender-based violence and sexual assault really are. One in three women and one in six men will experience sexual assault in their lifetimes. If you don’t think it can happen here at Middlebury, or anywhere else you go, think again.

I am part of this statistic. After years of grappling with this injustice, I don’t blame my perpetrator, I blame what is “normal” in our culture. For me, this is the importance of this work, because it shows that such pervasive sexual violence is not done by the hands of a few individuals, but by the collective hands of society. Rape culture, patriarchal norms, relationship abuse, who initiates sex, what you “owe” others, subconscious beliefs in what you are entitled to, are all deep nuances we are taught in learning how to navigate the world. We are taught what it means to be a woman or a man in America, and we are all victims of the system. It is our duty and responsibility to unlearn these norms. We cannot accept sexual violence as the norm. I refuse to accept it, and that is why I fight every day.

You are currently working in the Civil Rights and Title IX Office on campus. What types of events and initiatives does Title IX focus on?

I am interning for the CRTIX Office this year, which focuses on policy enforcement, support services, and accountability. With the new Title IX regulations, the office is working harder than ever to create positive policy for Middlebury that works to support all students. This partly includes initiatives in education. We have hosted multiple educational sessions on the new regulations and changes to Middlebury policy. “Speak About It” is a new consent education program, offered this month that opens up conversation about healthy relationships, sex, consent, communication, coercion, and sexual assault. At the end of October, we are hosting a virtual “sexpert” panel, where students can submit anonymous questions to a panel of campus and community professionals who work in the areas of sex, sexuality, and relationships. We are also facilitating a reading group discussion of Sexual Citizens in November, and updating our “Know Your Rights and Options” guide for anyone who has experienced gender-based violence and the “Helping a Friend” handbook for friends and partners of survivors of sexual violence and other personal violations.

One in three women and one in six men will experience sexual assault in their lifetimes. If you don’t think it can happen here at Middlebury, or anywhere else you go, think again.

Talk about your internship with the Seattle Seahawks.

During the summer of 2019, I interned for Seattle’s Harborview Assault and Trauma Center. Part of this work included training high school coaches to implement sexual assault prevention programs (Athletes as Leaders and Coaching Boys into Men) into their teams. These programs were recognized by the Seattle Seahawks as essential in ending sexual violence in Washington. They hosted a “train the trainers” event ,in which Seahawk linebacker Bobby Wagner spoke to the importance of these programs. We successfully trained 24 new schools in 17 school districts, totaling 247 coaches, mentors and advocates.

What was your biggest takeaway during your time with the Seahawks?

The National Football League has been in the news for countless sexual assault, harassment and violence charges. The Seahawks in recent years, though having many problems of their own, were one of the first teams to speak up about this culture. Addressing rape culture, healthy relationships, consent, toxic masculinity, integrity and respect through the lens of youth sports can shape a future without violence. This is exactly what the Seahawks are invested in.

Because athletes have such a large social platform and hold social capital in the world, athletes are often role models for many young people; also, their actions dictate the norms and expectations of society. It was incredibly powerful to hear Wagner speak about the importance of mutual respect between humans, and for him to admit many of the social and emotional pressures that traditionally men don’t express. As one of the most talented football players in the country, his opinion on subjects like sexual violence carries so much weight because people like him hold immense power in dynamics of sexual respect. For me, this is a strong reminder that athletes on campus play such a key role in determining our culture expectations. Therefore, it is our responsibility to create a culture of respect. It is our responsibility to get these conversations started! Organize a complicity training with your team, attend educational forums on campus, speak out about instances of disrespect, address drinking culture, talk about team norms and call out your teammates if you need to.

We’ll give you the final word.

Accountability is the truest form of friendship, and we owe this to our teammates and to our Middlebury community. This is the responsibility that comes with opportunity to make change on our campus, and it’s the responsibility we all have to one another.