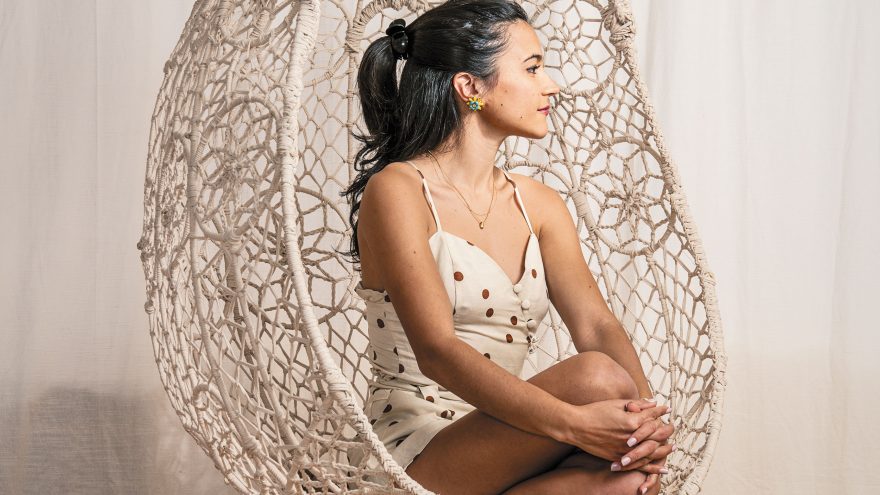 Wearing a cheap wig and impersonating your mother isn’t a surefire way to get famous. But for Alyssa Limperis ’12, it works. Making “mom videos” on YouTube began as a hobby—a coping method after Limperis’s father passed away and her mother moved to New York to be near her. Years later, the videos boast millions of views. In 2018, their popularity landed Limperis an agent in Los Angeles, where she now acts in commercials and television while inching closer to her lifelong dream of selling (and starring in) her own comedic series.

Her refusal to follow a traditional career path is what makes Limperis so lovable and her comedy so addicting. Spend a minute watching her mom videos and you’ll understand. Shuffling around the house, sighing at the neighbor’s new car, and force-feeding leftovers, Limperis’s impersonations of her mother are relatable; they make you laugh at your own family dysfunction while embracing the reality you’re not alone.

For Limperis, this laughter isn’t just a relief, it’s a means of survival.

After Middlebury, Limperis moved to New York to work as a financial consultant. Soon she spiraled into a dark depression. She knew her job was wrong but she was terrified to leave.  “I dreaded saying out loud that I wanted to be a comedian. But after one year in consulting, I couldn’t go back. I knew if I kept doing it I’d be bitter, unhappy, and miserable.”

So she quit and landed a waitressing gig. For her first year, she did at least three open mics a night, mostly in empty, cigar-filled lounges. She was broke and bombed most of her sets, but she was happy. “I remember finishing my first 10-hour waitress shift, getting on my bike, and riding to the East Village for an open mic,” Limperis recalls. “I’d never felt so free.”

Then, as quickly as things built up, they fell apart. Terminal brain cancer gave Limperis’s father months to live. She moved home to Massachusetts to tend to the man who orchestrated prank wars on every neighbor and who knew her better than anyone else.

Every night, they’d watch Seinfeld, the show she adored during childhood. “It was our half-hour of relief,” says Limperis. “I was watching my dad lose every function in his body. Every day was the worst day I could imagine. But this show was the one thing that brought us light and made him laugh.”

After Limperis’s father died, her mother made the move to New York. “It was a dark time for both of us,” says Limperis. “My mom didn’t want to be at home alone, and we were spending so much time together. I was just watching her react to being in New York City.”

Like any good writer, Limperis saw opportunity in their shared pain.

“Some of the things my mom would say in the city were too funny,” says Limperis. She and her mother began writing down the comments. Once they finished their script, Limperis dressed up in her mother’s clothes, then performed the sketch. Her mother filmed.

“Making these videos became so joyful for both of us. They came from a place of love,” Limperis explains, noting her father’s sensibilities informed their comedy as well.

The mom videos were hilarious, but niche. Then, in winter 2018, everything changed.

Convinced they were beating a dead horse, Limperis and her mother agreed to make one last video, about visiting mom at home.

Limperis published the video, then left for work. Hours later, it had been shared hundreds of thousands of times. Coincidentally, Limperis’s mom was coming for dinner the night their video went viral.

“I was so excited to tell her, and when she got to my apartment, I showed her the responses,” Limperis recalls. “We just sat there, ate Mexican food, and cried. We had come so far. And for the first time in a long time, we felt free.”

Limperis has developed several characters for videos. This blonde goddess is her overly extroverted Southern woman. Her crowning video is “Woman at Lunch Who Can’t Tell a Story.” “I just love playing with characters who talk without having anything to say,” says Limperis.

This gum-smacker is the star of Limperis’s play, which ran at NYC’s United Citizens Brigade. “The play’s about Tina and Gina, the hosts of your least-favorite daytime TV show, WAKE UP!, which makes The Real Housewives of New Jersey seem like Mister Rogers’ Neighborhood.”

Usually, Limperis wears the mom wig with her mother’s cable-knit sweaters and chinos. “It’s from Amazon, it doesn’t fit me, and let’s be honest, it’s really more of a toupee. But there’s something about putting it on that feels really joyful. When I’m wearing it, I can just escape into a character. It’s the best feeling in the world.”