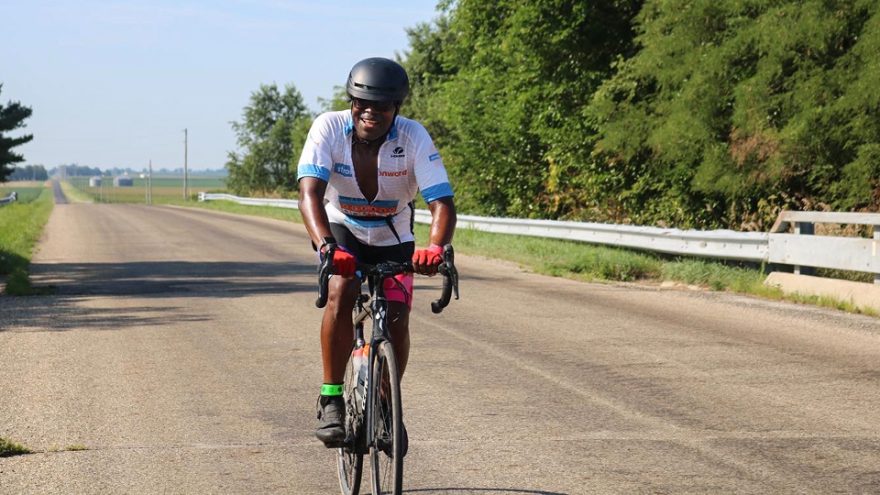 There’s a reason these rules are important to him. Once a talented educator, writer, public speaker, and head of school, Michael suffered a massive ischemic stroke in May 2016. May 21, 2016, to be exact, as he will tell you. His intellect is as sharp as ever; but he cannot always express all he wants to say the way he’d like to. The stroke left him with aphasia, the loss or impairment of the power to use or comprehend words.

It left him with another dilemma as well. While working on his recovery during the 37 days he spent at Spaulding Rehabilitation in Boston, one of his big worries was that he needed to get back to work at Cambridge Friends School, where he was the assistant head. He was convinced he could do it and it fell to his wife, Carolyn, to explain that he would not be able to return. The work that had defined him, that he had devoted himself to over the years, was not doable anymore. What defined him now was his stroke and its aftermath.

When Michael describes his prestroke life and his career in education, he uses phrases like “It was wonderful,” and “I loved it,” and “I was as happy as can be.” He taught English, coached football, wrestling, and baseball at Perkiomen School in Pennsylvania, and lived in the dormitory with the kids. He was then at Roxbury Latin for 16 years, teaching, coaching, serving as dean of students, director of admissions. He realized he wanted to be head of a school and worked toward the goal. He moved on to serve as head of the upper school at the University School in Ohio, head of school at Paul Cuffee School, then assistant head at Cambridge Friends.

Words and public speaking were another important part of who he was in that previous life. He loved to share his knowledge about Martin Luther King Jr., whom he discovered when he was a young boy, and he gave talks about King at over a hundred schools. He wrote innumerable articles published in places like the Boston Globe and NPR. He had a profound love of literature, particularly the works of Shakespeare, and he earned a master’s from the Bread Loaf School of English, where he met his wife, also a Bread Loaf graduate.

An ischemic stroke occurs when the blood supply to part of the brain is interrupted or reduced, preventing brain tissue from getting oxygen and nutrients. Brain cells begin to die in minutes. Carolyn Obel-Omia explains, “The part of his brain that was the most damaged mainly had to do with language. He had some physical damage and weakness on his left side but that’s been a much quicker recovery. His biggest obstacle is definitely aphasia.” Michael actually has what is called “fluid aphasia,” which means he has no trouble producing words, forming them and getting them out, but they might be in the wrong order, or he might come up with a word that’s related to the one he is trying to use but is not quite right.

Michael’s recovery since his stroke has been two-pronged and defined by determination. Before the stroke, he had been a cyclist, even completing a trip across the country in support of buying mosquito nets for Africa. Recovering at Spaulding, he told himself he was going to work hard to get back to biking. Once home, he tackled a stationary bike almost every day. Only three months after the stroke, he and a friend went out for a ride. “Four miles,” he says. “Four miles and I fell down three times. I was so depressed. But I was determined to cycle.” By September, he was able to go on a 25-mile ride. “I was so proud of myself. Didn’t fall once.”

The other part of his recovery he worked hard on was his speech. He felt if only he could get that part of himself back, he could return to work. But his determination couldn’t hold up to reality. In December 2016, after telling his therapist, Mark, he could get back his words, Mark said, “Okay, Michael. Why don’t you write down a little story?” Michael wrote. Mark said, “Okay, read it.” Michael read it. He says, “It was horrible. It was so bad I started to cry.” But rather than feeling defeated, Michael did more writing. Every day. And he has been doing it ever since, writing what he calls Musings, about the things he accomplishes each day, the people he meets, the events he attends, with a selected poem from literature that matches his mood. And he sends it out by email to his friends, almost 500 people. Every day for the past five years.

Writing has been a way for Michael to find his words, to have control over them. And writing his own poetry has turned out to be an important part of that process. It began with frustration over a simple task—trying to zip a zipper. For months he tried but couldn’t do it. Finally, one day, he managed to zip up. He sat down and wrote the poem “Gratitude,” which includes this stanza:

I swear and sweat, moving the small zipper, I work.

Slip goes my left arm, but I am okay.

slowly, calmly, I have my zipper.

Lightly impressing, I can do it:

Carolyn sent the poem to a medically themed arts journal, Blood and Thunder, and they published it. Michael was so inspired he began to write more poetry. A lover of Walt Whitman, he wrote 52 poems in tribute to Whitman’s 52 sections of Song of Myself. With the help of Carolyn and others, he created a book of poems, and in 2021, they published Finding My Words: Aphasia Poetry.

“I spent the past eight years working to regain my sense of self, trying to answer the question: who am I now?”

These are the words of Debra Meyerson in her book Identity Theft: Rediscovering Ourselves after Stroke. A tenured professor at Stanford University who taught about diversity, gender, identity, and organizational change, Debra suffered a severe stroke in 2010 that nearly killed her and left her paralyzed on the right side and completely mute. Years of intensive therapy have enabled her to regain her independence, but she still lives with physical limitations and speech challenges. She wrote Identity Theft to help other survivors navigate the emotional journey of their poststroke lives.

The book resonated with Michael. He too had been a teacher, a writer, a speaker, like her. Could he still say he was all those things?

He had begun to go to the Aphasia Resource Center (ARC) at Boston University and at one point joined a book club, where he discovered Identity Theft. Much to his delight, in October 2019, Debra came to ARC to speak, and he was able to meet her. He asked if he could send her his Musings email and she said sure. Their relationship began.

Debra and her husband, Steve Zuckerman, had founded the organization Stroke Onward, to further the emotional support written about in her book for survivors. Now they wanted to do something more to bring awareness to the devastating aftermath of strokes. They decided to do a bike ride across the country, stopping along the way to hold events, where stroke survivors and their care partners could tell their own stories. Debra asked Michael if he’d like to join them.

He told Carolyn, “I can do this!” She wasn’t so sure. But she knew Michael’s determination. He began to train, every day, and on June 1, he joined the ride in Missoula, Montana, after attending his older son’s college graduation. It was a small group: Debra and Steve on a tandem bike, pulling their dog, Rusti, in a trailer; Whitney Hardy, a former college athlete who had been hit by a car and had a traumatic brain injury; and two interns, softball players from Washington University, Alex Rubin and Emily Talkow, who organized the events along the way and provided photo and video coverage of the trip, while taking turns riding along. Others joined the ride at various points, including many Middlebury alums who were friends of Michael’s.

For Michael, the riding had its moments of frustration and elation. In the beginning, the terrain was mountainous and challenging. At one point, in Colorado, the riders were going straight uphill for three hours. He wondered when it was going to end. Finally, he felt he couldn’t do it anymore. He joined the rest of the group, who had stopped, and walked to Steve, ready to call it quits. Steve said, “Congratulations! Great job! Now you get to go downhill.” They had reached the high point of 10,276 feet at Cameron Pass. From there, they had a 15-mile descent. Michael reached up to 40 miles per hour on the way down. “That was awesome,” he said.

By the time he dipped his bike wheel in the Atlantic Ocean, he’d ridden through 12 states and part of Canada and racked up over 3,300 miles. He was justifiably proud.

Not only was conquering the physical part of the ride satisfying, but the public events held at various stopping points were meaningful for Michael as well. He would speak about his experiences and hope to be inspiring; but the people he met also had a profound effect on him. “I met a wonderful woman in Buffalo, Cathy O’Leary. She had a bad stroke, left side, has aphasia. I remember sitting down next to her and I grabbed her left hand. I said, ‘You can do this, you know. You can be inspired by this thing.’ I pulled her left arm out and said, ‘You got to keep your hand out every single day, every day you have to work on this.’ Now I am writing to Cathy with Musings, and she and her husband, Michael, are using a tandem bicycle.”

Carolyn agrees the events were powerful. The people attending who’d had strokes were hearing from Michael about this incredible trip he was accomplishing. “Kind of like whatever your dreams are, you can do it. This is the life that you can continue to have. I also think Michael was inspired by these people, who were telling their stories of what they were accomplishing.”

It was meaningful for Carolyn as well. She joined the Stroke Across America group for an event in Albany and was touched by a woman who told about the change in her life when her husband had a stroke. “When Michael first had his stroke, it was like this thing had happened to Michael—but then it was apparent that this had happened to both of us, to our family. It changed my identity as well, not to the same extent, but there’s a different role I have taken on.”

She continues, “Same way that Michael, I think he was so frustrated and depressed after his stroke, feeling like if he wasn’t a teacher, who was he? If he couldn’t speak to people and tell his story and inspire them as a Black man, first-generation four-year college student who accomplished all that he did, if he couldn’t be that role model for people, then what could he be?”

Michael’s journey has helped him realize he still is a teacher, a writer, a speaker, and now an advocate for people on the same journey. It’s for a different audience than he had before and it’s not the path he planned to take, but it’s an identity, nonetheless. His recovery continues, not without its struggles, but he perseveres with the love and support of friends and family, particularly Carolyn. And he touches people every day, especially through his Musings, which he almost always begins with this sentence: “I hope you are well, and I am blessed, humbled, and grateful, thank you.”