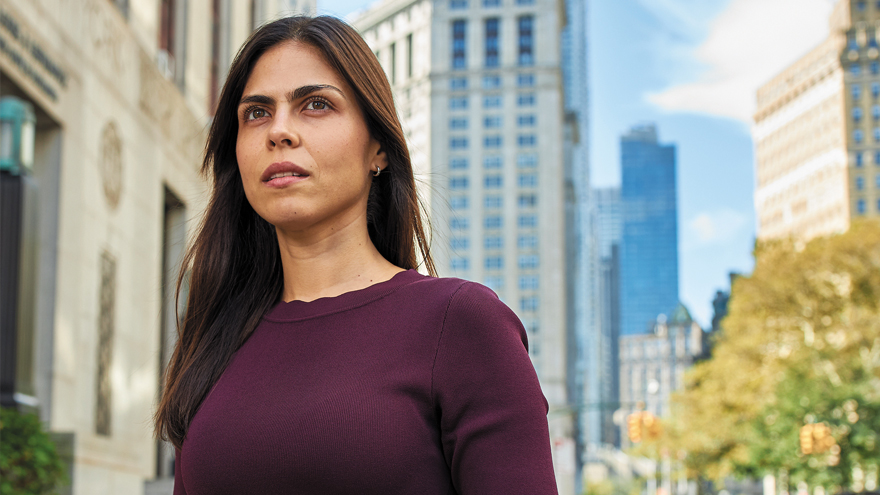 Lucía Falcón Palomar mati ’17 sits in a room full of people: an assistant district attorney (ADA), a detective, an investigator, and an agent from the Drug Enforcement Administration; in front of her sits a defendant with his attorney next to him. The meeting has been called to investigate an international narcotics trafficking network. It’s her job to interpret what the defendant is saying in Spanish to the English-speaking people in the room and interpret their questions into Spanish. For the next two or three hours, Falcón will be constantly working to find equivalent words or expressions in two languages, trying to be as accurate as she can, and often needing to interpret or sight translate convoluted legal clauses. By the end of the meeting, she is glad she’s helped the process, but she feels exhausted.

When Falcón was hired in 2017 as a translator and interpreter for the Office of the Special Narcotics Prosecutor for the City of New York, she felt she had landed a job that could combine her love of languages and law. Not only does Falcón have a master’s in translation and interpretation from the Middlebury Institute, she also has a law degree from a Mexican university. And she has been speaking English since she was six. Her skill set seemed a good match for the job, which involves working for the most part on long-term narcotics cases, both transcribing and translating trial and investigation documents, and also interpreting for defendants as they are questioned by an ADA or for witnesses being prepared for trial.

She soon found out, however, that there’d be a hefty learning curve in her new job. “When I started, no one taught me anything, they just threw me in the meeting. It was pretty intimidating. I made a lot of mistakes,” she admits. What made it even harder was that Falcón is from Mexico; most of the immigrants she interprets for are from the Caribbean, which has its own dialect and culture. It’s hard enough to be constantly trying to find the correct words in two languages; but when the words are slang, or code words for drugs, it’s particularly difficult.

She developed strategies. As unfamiliar words came up in the meeting, she would make mental notes of them and later check the internet for their meaning. For slang, she was able to go to her father-in-law, who is from the Dominican Republic, and ask him for the meaning. Context became essential for understanding. But mistakes still happened. “One time the defendant was talking about a supervisor in Spanish, and in English I used the word ‘butler.’”

Falcón is quick to point out that interpreters are not dictionaries who simply translate a word. “We are really linguists. We work with language, with words, and with context. But it’s more than that. Our job is also about culture.” She understands that the defendants or witnesses are scared. Often the English speakers ask questions quickly, abruptly, and that can sound hostile in Spanish. “So I always try to add a ‘please.’ I’m not going to change the meaning of anything. But if I don’t do that, the person is going to stop working with them. That person doesn’t want to be there anyway, and they’re afraid of law enforcement because they think they are going to report them to immigration.”

Falcón learned a great deal about the immigrant community when she first moved to New York City. She worked at the Mexican Consulate in the Department of Protection. “It was an eye-opening experience for me because there you can see how immigrants live in this country and how hard it is for someone who has to try to navigate a different legal system, not speaking the language.”

Falcón feels giving a voice, through her own, to immigrants is important, especially at her current job. “For me it’s very clear I am helping a human being, someone who has rights. Even if it was a really bad thing they did, they still have the right to understand what’s going on with their case.”

“My father gave me this necklace to help me remember the three keys of life: my emotional project (which sounds better in Spanish but involves family and friends), my personal project (profession), and my community project (contribution to society). These are the three things I should never overlook, he told me. I have worn it for many years, and it’s a warm little reminder of what truly matters in life for me,” Falcón says.

This porcelain pig was a gift from Falcón’s godmother, who lives in Germany, where “lucky piglets” are associated with good luck. “She gave it to me when I was 15, and I have kept it with me ever since, taking it to all the different places I have lived. It has even fallen apart and I have had to glue it back together.”

Reading has always been Falcón’s favorite activity. “The Neverending Story has been my favorite book since I was very young. I have read it many times and every time I find new meanings in it. It is not just an imaginative tale for children; it’s about the nature of imagination itself and what it means for us to have hopes, dreams, and wishes.” One of her favorite quotes from the book runs like this: “Only a genuine wish can lead you through the maze of the thousand doors. Without a genuine wish, you just have to wander around until you know what you really want.  And that can take a long time.”