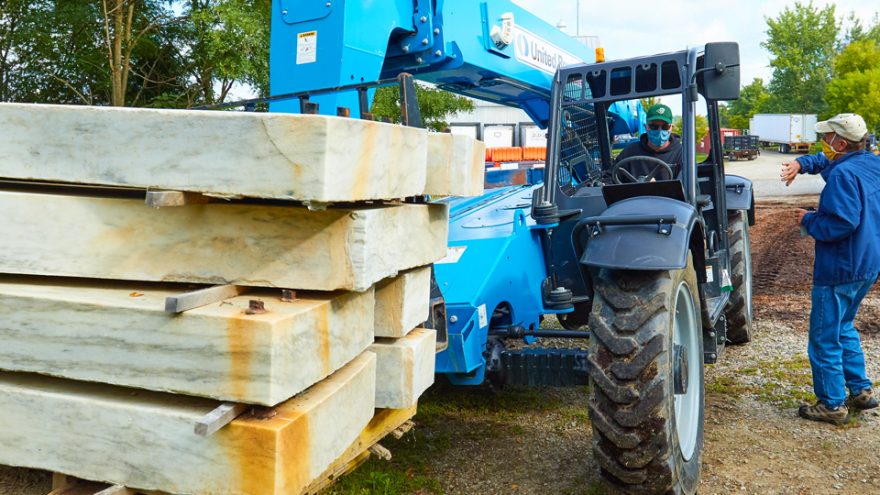 When renovations began on Munroe Hall in 2019, Wayne Hall, Middlebury’s supervisor of carpenters, painters, and locksmiths, sought to ensure that as much of the material removed from the structure as possible was recycled or reused. That included the marble from the building’s construction in 1947.

“The south entry of Munroe was all marble that they tore out and replaced with new,” Hall said. “Instead of disposing of the old marble, I asked Norm Cushman, who was running the project for the College, ‘Could we donate this rather than dump it in a hole somewhere?’”

Hall had seen an article in the Rutland Herald about the Carving Studio and Sculpture Center, a stone-carving school in West Rutland. “I knew that the marble from Munroe was probably destined to be discarded,” he said. “I called the center and sent pictures of the marble to see if the pieces were something they could use. I hated to see it get dumped.”

Cushman, associate vice president for operations at the College, liked the idea and had the marble moved down to the material recovery facility—officially the David W. Ginevan Recycling Center—until the carving studio could come get whatever no one else wanted to carry off. We know of at least a few pieces that made it into a certain professor’s backyard pizza oven, but that still left an impressive amount—approximately 15 tons!—for the carving studio. Gawet Marble and Granite, based in Center Rutland, donated a truck and driver to haul the marble to West Rutland where, instead of becoming landfill, it is now getting new life as practice carving material for sculptors in training.

Carol Driscoll, the carving studio’s executive director, called the marble from Middlebury a “real gift,” because it gives students more opportunities to take workshops or work individually with instructors.

One of those student sculptors was Mark Burnett, a Massachusetts firefighter who was studying at the carving studio when he heard that the Downtown Rutland Sculpture Trail was looking to add a bust of Martin Freeman to its collection of regional historical figures. Freeman, born in Rutland in 1826, was the first Black man to become a college president in America. (He was also the salutatorian of Middlebury’s Class of 1849.)

Burnett created a clay version of the bust, which master sculptor Don Ramey then carved out of marble. Thanks to the efforts of Rutland-area business leaders and donors, Vermont Quarries, and the staff and artists of the Carving Studio and Sculpture Center, Freeman’s bust is now on display in the Center Street Marketplace Park in Rutland.

Driscoll said she appreciates that Hall saw the Munroe marble as more than construction debris. “It’s incredibly valuable to us,” she said. “It’s helping us nurture another generation of sculptors.”