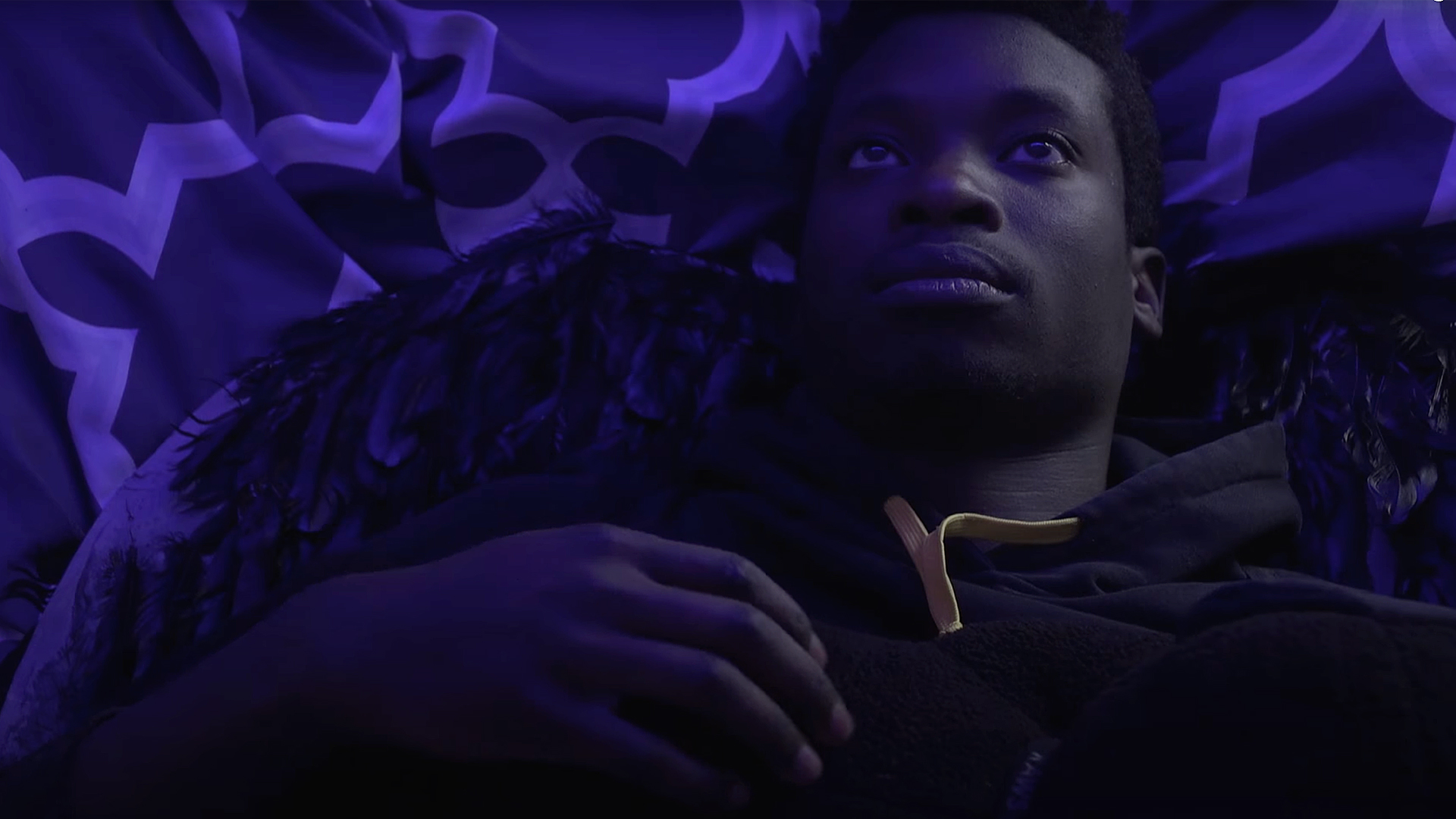 There’s a moment early in the film when Munya Munyati is staring at himself in the mirror. A pair of feathered black wings unfurl from his back as he splashes water from the bathroom sink on his face, holding his own steady gaze.

“What’s with the wings? I know you’re wondering,” he narrates to the audience. The whole short film is a monologue narrated in his voice, brimming with bashful, honest musings and playful, wry humor.

“Let’s just say,” he tells the viewer, “I’m not from here,” and he cuts to the next scene.

Munya Ra Munyati, Class of 2020.5, was in his sophomore year at Middlebury when he acted in, filmed, and produced that scene. It was part of a five-minute short film, Descent to Madness, the first assignment in the first production-focused course he’d ever taken.

He speaks to me now, nearly five years later, with fondness for the instructor, Ethan Murphy, and appreciation for how the class shaped his growth and path. “The projects were all about giving us some guidance, but the guidance was only there to allow us to explore our own creativity,” he tells me. “Everything else was stripped away so we could focus solely on the story we wanted to tell.”

Descent to Madness came first, followed by several more short films that varied in focus, from isolation to addiction to acceptance and healing. They shared things, too: main characters wearing the same feathered wings, casts of Black actors where possible, and storylines that followed seemingly mundane slices of Munyati’s life, like asking someone on a date, finding a roommate, or throwing his first college party. The viewer is privy to the unseen, internal reflections, musings, and challenges through it all—the nerves, the decision-making, and the joy. “Each main character in the wings shares being ‘othered’ in some way, and each is navigating the challenges of some simple social interaction. We experience all of their inner thoughts, their struggles, their reactions along with them.”

Munyati is now working at Vice, a globally renowned media company where he develops and produces videos from all over the country—even the world. Yet he still considers Descent to Madness some of his best—and perhaps his truest—work.

He smiles as he describes his first project. “As a film, it isn’t trying to do anything too hard, it just is. It’s just me. It’s steeped in my reality.” He pauses before affirming, “I’m not a creator that can make something without any connections to my actual life.”

Munyati’s teenage years were punctuated by fond and vibrant memories of the annual Harare International Festival of the Arts (HIFA), a weeklong celebration in his hometown of Harare, Zimbabwe, filled with poetry, music, dance, and visual arts from Zimbabwe and across Southern Africa more broadly. He recalls walking in every year to rows of food stalls serving boerewors rolls, burgers, and chibage (roasted corn), and artists proudly presenting their photographs, ceramics, paintings, and jewelry. At night, dancers and singers would take to the stage in front of the cheering festival crowds.

“It was a place you went where . . .” he searches for a moment to describe what it felt like. “You couldn’t not be exposed to art,” he laughs. “It’s a gathering of African artists and creatives, all wanting to share with each other and with you. You just soak it up. You want to be a creator, too.”

“I learned to talk about art, how people see themselves in the context of their art, and how they talk about Zimbabwe through their art,” he recalls. HIFA was one place that helped Munyati understand himself as an artist and creative, but it didn’t necessarily determine how he wanted to create. “I didn’t think I was an artist, because I didn’t fit the rules of what I thought an ‘artist’ was: someone who paints, who sculpts, who sings. I wasn’t any of these things,” he tells me. “I loved telling my stories through a camera, but I didn’t know that until later.”

Munyati continued to learn, experiment, and flourish as a filmmaker at Middlebury and during a semester studying at the New York Film Academy during his junior year. His final and culminating film at Middlebury was his senior thesis, I Don’t Want to Be a Foreigner Forever. It is, all at once, a reflection on his own story, a meditation on the meaning of home, and a love letter to Zimbabwe and its people, wherever they may be in the world.

Though all his work is connected in some way to his own experiences, this was the first film he placed himself within. It is about his own place and relationship to the Zimbabwean diaspora, but it’s about, and for, so many others, too. “It made me nervous at first, but I had this moment of realizing, how can I say that I want to see more people like me in the media, and then when I have the chance, I don’t do it? In the midst of talking about how I want to make media about people who look like me, whose stories so often go untold, I forgot I was a part of that as well. I could tell my own story, too.”

It’s a chilly Friday in March in New York City and Munyati is just packing the team’s cameras into their cases, taking care to protect all that they hold inside. They have hours—even days—worth of footage stored. There are colorful background shots of Coney Island’s beaches and bustling concrete streets as well as long clips focused closely on Nems, a man who Munyati has spent the last several months learning about. Gorilla Nems—or Nems, for short—is the subject of this film: a rapper and artist, well known and beloved in his Coney Island community, who went viral in late 2021 with an audio clip that has now been used in over half a million videos on apps like TikTok.

Gorilla Nems—or more specifically, the rich personal history that was typically overlooked in his moment of internet virality—is the subject of this film. The Vice crew has spent this whole day with Nems, spending hours interviewing him, asking passersby what they thought of the “King of Coney Island,” and capturing a rap performance that night. As he packs up the cameras, Munyati is wrapping up filming on the first project he pitched, developed, and filmed at Vice—an opportunity usually afforded to producers at a later or more experienced point in their careers.

As part of a Vice series highlighting local legends in their communities, Munyati wanted his film to better tell this story, about the life of a man who is cherished by his neighbors and city and who was thrust into the public eye without much attention paid to what made him who he is. “Everybody felt like they knew this guy, but they didn’t really know his story,” he tells me. This attentiveness is a throughline for Munyati’s profiles about people: “I felt like I owed that to Nems—I feel like I owe this to everybody—to tell a story that is authentic to their experience and how they would appreciate it being told to the world.”

Released in the spring, King of Coney Island surpassed one million views by early July. This was one of Munyati’s first goals when entering the media industry, and even at the media giant Vice, accomplishing this so soon is a rarity. “Having grown up watching Vice, I knew how infrequently videos hit one million views so soon after publishing, and I never expected it for myself in two months,” Munyati tells me. He noticed the “one million” milestone one day while juggling working on two other films already under way—one on environmental justice in Louisiana, the other a profile of a young woman documenting her fight against cancer.

When I comment on his rapid success, Munyati beams widely for a moment before putting his headphones back on, pulling up his editing software on his laptop, and diving back into work on his next projects. There are so many stories yet to tell.