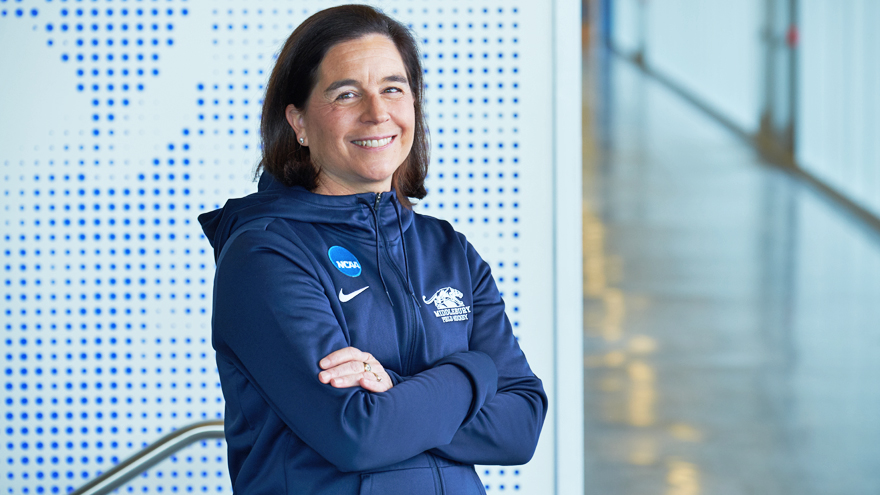 In November, Middlebury’s field hockey team captured its second consecutive national title and its third in four years. The magazine recently sat down with head coach Katharine DeLorenzo to discuss, among other things, the state of the program and a life-changing trip to India.

We need to start with the obvious: back-to-back national titles, three in four years . . .

Are we ready to start talking about a dynasty?

Well, others can decide if the program should be defined that way. What I enjoy right now is the manner in which our teams have approached the game, their training, each other. And this process, I think, is well represented by their achievements, which are national championships these last couple of years.

So those outside the program are witnessing what you’ve known all along?

Right. And it’s not just these past two or three teams. There was no dramatic change, where all of a sudden we’re a championship-caliber team. There’s a legacy here, a culture of young women competing for each other. You can look back at Julia Bergofsky McPhee ’02 and Heidi Howard Allen ’99 and their teams and see that these championships are a continuation of the work they put in.

Exactly. I would guess that they don’t feel like it was someone else winning these championships; I feel like 200-plus young Middlebury women won a championship in November.

For just about anyone, a championship season would be the highlight of the year, or a career, even, but less than a week after receiving the NCAA trophy, you, your coaching staff, and four alumnae were getting on a plane and flying halfway around the world to conduct a weeklong field hockey clinic in India.

Was there any time during the past six or seven months when you thought about what it would be like to go from one intense, thrilling moment to the other?

Well, we were prepping for the trip while we were also in-season, but our main focus during the fall was always on the student-athletes. For a while the actual trip was always—[gestures with a waving motion]—out there.

I’d like to hit on some of the highlights here, and then we can present a deeper look elsewhere in this issue.

You traveled to eastern India to conduct a clinic for 106 girls. Why there?

We were part of a humanitarian outreach program organized by the U.S. State Department, specifically the consulate in Kolkata, in their efforts to assist a populace that is extremely poor and vulnerable. Human trafficking there is high, specifically among girls aged 13 to 17. It’s estimated that six out of 10 are either sold into slavery as sex workers or laborers or entered into forced marriages. Sixty percent of this populace.

But there’s another fact about this demographic. They love hockey. In every village, the consulate discovered young girls playing hockey on dirt patches, grabbing stick branches, using whatever type of ball they could.

Since we can go into greater detail in the feature story, let’s use this moment to deliver a sort of teaser to describe your time there.

We were all out of our element. Our group had never been to India before; we spoke only English. And this region of India, particularly, was far different than any place any of us had ever experienced. And for these girls, they spoke only Hindi, and for this clinic they had been brought to the capital city, which may have been as foreign an experience for them (many coming from remote villages) as it was for us. The commonality, the equalizer, was hockey.

Perfect. Folks can now turn to the story and read more about the experience.