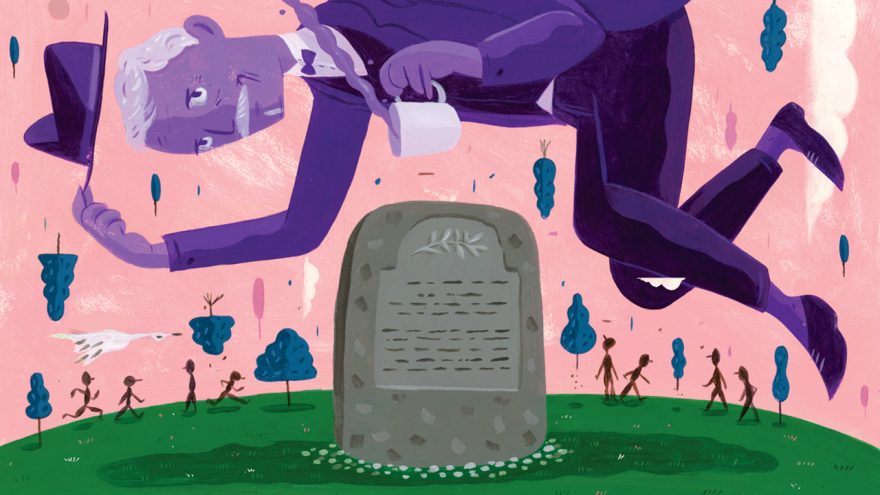 A lot of thought and research went into the selection of 46 objects that we think best illustrate Middlebury’s 217-year history. Many more items than 46 were up for consideration—if we had the space in these pages, we easily could have included at least 100—but one object in particular that didn’t make the cut is worth writing about just because it is so damn weird.

It’s that gravestone-shaped slab of granite that juts out of the lawn over by Warner Hall, with the following words inscribed on its polished face:

This monument has been erected by the Gravity Research Foundation, Roger W. Babson Founder.

It is to remind students of the blessings forthcoming when a semi-insulator is discovered in order to harness gravity as a free power and reduce airplane accidents.

And there it sits, with no other explanation.I highly doubt I was the first, nor will I be the last, to read these words and think, huh?

About 10 years ago, an alum named Ben Gore ’04 pitched me on the idea of running a story on the monument. We ended up not running the piece, but Gore’s reporting unearthed some fascinating material. The foundation and its founder, Roger Babson, were very real and very serious about the intent to both study and perhaps alter one of nature’s four laws. His quixotic pursuit was born of tragedy: he lost both his sister and grandson in separate drowning accidents. Gravity seized them “like a dragon,” the Chronicle of Higher Education reported him writing.

And after making a fortune in finance, he was well funded to pursue his quest. The monuments—there are 13 total—are a by-product of this effort. In the 1960s, Babson made a series of stock donations to colleges, Middlebury among them. The donations came with a pair of stipulations: that the stocks be liquidated after 40 years and that an “anti-gravity monument” with Babson’s chosen inscription be erected on campus. To date, gravity has yet to be harnessed, and Babson’s monument still stands on our fair campus. As for the 416 shares of the American Agricultural Chemical Company that Babson donated to Middlebury? That fund was liquidated in 1999. Dividends of the stock, having been reinvested, were worth about $4 million—and were used to help finance the construction of Bicentennial Hall, Middlebury’s science center.