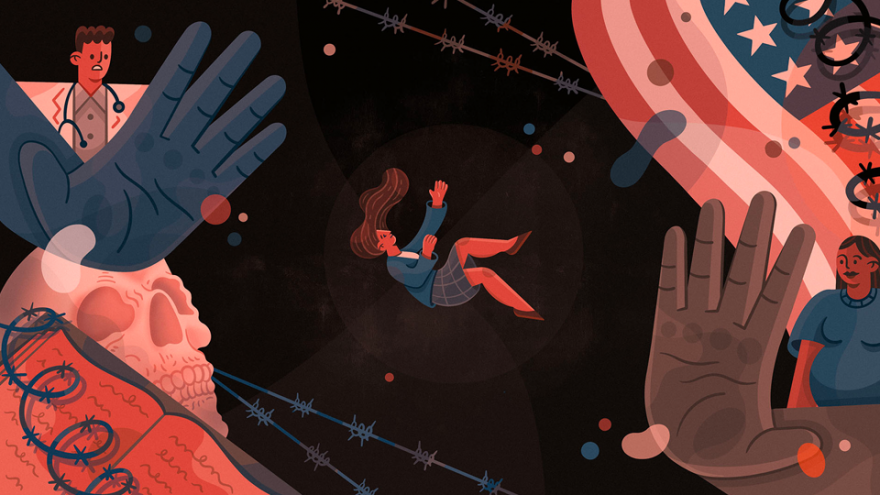 It’s a fine line that defines the moments before and after a significant life event: a simple shift that, more often than not, is driven by an experience of considerable trauma.

For writer and literature professor Antonia Vega, the central and complex character in Afterlife by Julia Alvarez ’71, her anticipated postretirement life has been upended by not one but several of those emotional shifts. Before, she was a wife and one of four sisters, living a quiet life in the Vermont countryside. After, well, things change.

From the first few pages of this deceivingly diminutive novel—there’s a lot of plot in just over 250 pages—we are introduced to the lyrical way in which Antonia’s thoughts travel from present to past and back to the roller-coaster present of her unfolding life. Written as a poem that reads like prose (or is it prose that reads like a poem?), the prologue embodies the give-and-take, the known and assumed, the then and now that are so intrinsic to all our lives.

Amid the syncopated phrases is our realization that Antonia’s beloved husband Sam has died unexpectedly, leaving her a home and community that are notably empty without him. As the local doctor, Sam was the social tie between Antonia and the townspeople; they grieve his absence and look to her to fill it, but she is awkward and unsure how. Only by the end of the novel has she begun to forge a real friendship with one of Sam’s former nurses who, in Antonia’s mind, has fulfilled her need for current favors out of a long-lived sense of quid pro quo to Sam that Antonia has seemingly inherited.

To add to her complications, her neighbor Roger, who employs illegal immigrants to work on his dairy farm, reluctantly turns to Antonia for help with one of his workers, a young Mexican named Mario. People often assume that because Antonia herself is from the Dominican Republic she must care deeply about all things immigration. It’s just another way people tend to make racial assumptions about her that she doesn’t bother to correct. Next thing she knows, a pregnant teenager, Estela, is inhabiting her guest room after experiencing a traumatic coyote-led run across the border, only to be spurned by her beloved Mario because the baby surely can’t be his. This isn’t her wheelhouse, laments Antonia; it’s Sam’s. But Sam is gone.

Losing your husband unexpectedly at a time when life postretirement should be just beginning is debilitating enough. Finding the flaws of our immigration system on your doorstep can be morally and socially trying. But on top of all that, Antonia must also deal with family drama when one of her sisters goes missing.

For a woman grounded in the buoying effect of the literature she loves and teaches, her borrowed phrases are beginning to fail her. The words she has relied on to guide her through life’s trying times are not just falling short but being outright cut off by friends and sisters who don’t have the privilege of interpreting life at such a distance.

Afterlife is Alvarez’s welcome return to adult fiction after a meaningful contribution of poetry and young adult fiction. Also remarkable this year is her inclusion in USA Today’s National Women of the Century. Alvarez is one of 100 significant women who have made notable contributions to the American landscape since 1920.

On that list, she is lauded for her ability to “span cultures, charting her own identity formation and experiences as a Dominican American. Best known for her novels How the García Girls Lost Their Accents and In the Time of the Butterflies, Alvarez has won numerous awards including the Pura Belpre and Americas Awards for her children’s novels, the Hispanic Heritage Award in Literature, and the F. Scott Fitzgerald Award for Outstanding Achievement in American Literature.”

Her semiautobiographical approach to fiction has been a strength in her writing since her early recognition, and readers will find similar themes and parallels in this novel as well. Antonia is an esteemed and recently retired college professor of literature and writing in central Vermont. Her boisterous sisters are inextricably entwined in her life and personality. And her Caribbean heritage runs deep in her blood but on the surface of her soul.

Afterlife captures Antonia’s—and perhaps Julia Alvarez’s—perspective not only on a life that has been, but on a life that is. The world and its worries have come close to home: a broken immigration system, a compromised environment, growing gun violence, ineffective health care and mental awareness, and the plain uncertainty of aging. Yet each challenge Antonia faces gives her the strength and experience to face the next. And Alvarez’s art and dexterity with storytelling leave us cheering her on.

Afterlife is currently the selected title for the MiddReads book club. Sign up today and join the discussion!