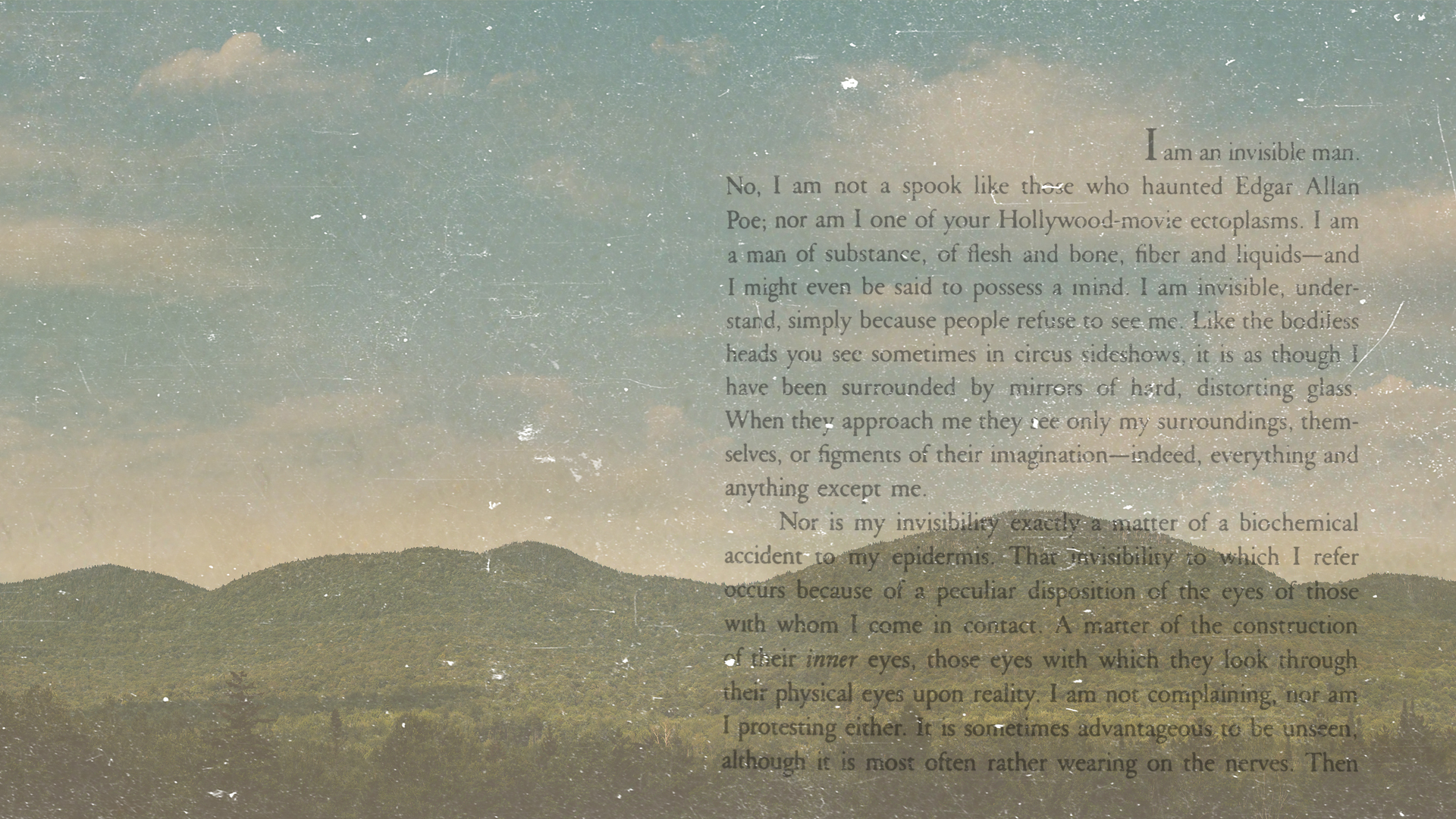 “It all began,” Ralph Ellison wrote, “during the summer of 1945, sitting in a barn in Waitsfield, Vermont, where I was on sick leave from service in the merchant marine.”

Ellison was speaking about starting work on Invisible Man, his classic novel of African American social and intellectual experience—and of human experience, period—at midcentury. It was published in 1952 and won the National Book Award for fiction the following year.

Invisible Man is among the tent poles of American literature. In 1988 the Modern Library ranked it 19th on its list of the 100 best English-language novels of the 20th century. Barack Obama modeled his memoir, Dreams from My Father, on Ellison’s novel.

It tells the story of a nameless young black man from the South who is expelled from a black college and moves to New York City. He becomes a spokesman for “the Brotherhood,” a group working to improve conditions in Harlem. Amid queasy-making violence and unrest, the narrator flees to an underground coal bin. He relates his story, he says, for this reason among others: “Who knows but that, on the lower frequencies, I speak for you?”

How did Ellison, the young Harlem intellectual, end up sitting in the open doorway of a barn in the Green Mountains, the fields spread out before him, bumblebees and butterflies making their presence felt, beginning to type his masterpiece? The story was first fully told in Arnold Rampersad’s landmark 2007 biography of Ellison. A new book, The Selected Letters of Ralph Ellison, edited by John F. Callahan and Marc C. Conner, adds a lot of grainy detail to the picture. Reviewing the book for the New York Times back in December, I found Ellison’s letters to be a deep pleasure to read.

The grandson of slaves, Ellison (1914–1994) was born in Oklahoma City. His father, who delivered ice and coal, died when Ellison was three. His mother worked odd jobs to hold the family together. Ellison attended Tuskegee University in Alabama, where he played the trumpet and thought he might become a composer. In 1936 he moved to Harlem and fell in with a bohemian crowd that included Langston Hughes and Richard Wright. He slowly turned toward writing and editing.

Ellison first traveled to Vermont in May of 1943. He was a guest at the Waitsfield farm of John and Amelia Bates, a mixed-race couple he’d met through Wright. Ellison helped them renovate their 18th-century house when he wasn’t trout fishing or writing book reviews. He wasn’t yet working on a novel.

Ellison liked Vermont so much that he returned two years later, in August of 1945, along with his wife, Fanny. He wanted to escape the oppressive Manhattan summer and work on the project that was taking over his every waking thought. The couple took a train from Grand Central to Montpelier. When the woman they’d hired to drive them to Waitsfield failed to appear, they took a cab to the farm.

The mountain air revived them. “We sleep far longer than we’d ever think of doing in the city: and our appetites have increased as though in place of normal human stomachs, we have suddenly unfurled cotton-sacks instead.” The Ellisons’ appetites grew hearty, but food was a problem. The nearest proper grocery store, Ellison complained, was 18 miles away. He asked a friend to send coffee (“Maxwell House preferred, but any brand is acceptable”) and “as much sharp American cheese as possible.” Still, he wrote: “I guess you can see we like it here.”

They found the landscape intensely beautiful. Ellison wrote to a friend about birch trees that “show like girls in light summer dresses through the more somber dark green dresses of the spruce and pine.” Writing to friends back in New York, his descriptions of Vermont’s landscape were often lightly eroticized and occasionally a bit windy. “I’m told that there is quite a lot of incest in these mountains, the sign of a region gone to seed, a frontier exhausted and abandoned, but also influenced, perhaps, by the fact that everywhere one looks it is possible to imagine huge maternal women, such as Gulliver saw in his travels, reclining languidly, with their smooth mountainous breasts, nipples erect, to the hungry lips of the clouds.”

Most importantly, with few distractions, work on Invisible Man went well. He wrote to Wright: “I write so much more freely here in the country. Harlem is killing me, I know that now. There my emotions are pulled in a thousand directions before I can have coffee in the morning.” He added: “When the poison of Harlem mixes with this pure mountain air, anything’s apt to come out of my typewriter.” This beautiful letter concluded: “I want to go out there on that mountain with the farm against its slope and scream like an eagle screams.”

There’s a comic scene in Ellison’s letters from August 1945, when he and Fanny attend a square dance in a nearby town. Ellison deplored the music, which he found to be so anemic that it “demanded a stethoscope to find its pulse.” Vermonters, he noticed, couldn’t dance: “for the most part they simply hopped about uncouthly.”

Less comically, he found those in attendance to be “a seedy, washed-out stock,” “sick from inbreeding and malnutrition.” He wrote: “They are a friendly people, despite their New England dourness; and in spite of their wrecked appearance, here and there in the bearing and expression of some farmer or his wife you can see peeping through” signs of “gentility and sensitivity.”

How did Ellison, the young Harlem intellectual, end up sitting in the open doorway of a barn in the Green Mountains, the fields spread out before him, bumblebees and butterflies making their presence felt, beginning to type his masterpiece?

Ellison returned to Vermont once more while working on Invisible Man. In late summer of 1947, he and Fanny came to South Londonderry, near Manchester in southern Vermont, to spend time at a “little cottage” owned by their New York friends Beatrice and Francis Steegmuller. She was a noted painter; he wrote for the New Yorker and was a biographer and Flaubert scholar. The “little cottage” turned out to be rather grand.

The Ellisons brought their dogs with them. When baggage handlers at Grand Central wouldn’t allow the animals to board, for what Ellison thought were racial reasons, the couple raced up to the 125th Street station and got on there instead. Once in South Londonderry they hiked and swam and ate fresh corn and drove the Steegmullers’ Jeep station wagon and saw a sky “alive with Northern lights.”

Once again, Vermont released something in Ellison’s sensibility. In order to write he needed distance from the milieu he was describing in his novel. “In musing over the difference between my ability to work here and my floundering at home,” he wrote the Steegmullers, “I’ve concluded that since I’m concerned a great deal with cloacal and subterranean imagery and symbolism, working in our little apartment (with its long, narrow entrance into a small, low-ceilinged room, dark and warm) is too close to what the imagination is struggling to transform. While here in a valley among mountains looking out upon a flowery hillside complete with spiders sinister, butterflies and hummingbirds, things don’t seem nearly so desperate.”

Fanny returned to New York after a few weeks. Ellison stayed into October, and some of Vermont’s magic wore off. He began to have trouble lighting the oil stove on cold mornings; when it did light, the fumes made him ill. One day one of his dogs, Bobbins, came limping home full of porcupine quills, and removing them was a terrible ordeal.

“If I had a car here I would have packed and come home last night,” he wrote to Fanny after removing the quills. “I felt bad about Bobbins, then sorry for myself; and when I went down to the garden and found many of the string beans and tomatoes frostbitten and going to waste I actually felt like crying.”

From Vermont, Ellison was a fine writer of love letters. “I must go now, Lady Good-Goodness,” he wrote to Fanny. “Write when you can, but please don’t be too lonely, and please don’t cry. Remember I’ll be back in not too long a time and then we’ll do for each other completely those things that dissolve all loneliness.” In a later letter to Fanny, he wrote: “Loneliness gets too much under the skin. Speaking of skin, I hope you’re eating enough to keep yours filled out. You’d better. I want all of you that it is possible to have to love.”

Ellison was an avid hunter. He went for long walks in Vermont with his rifle and shot grouse, squirrel, and (revenge) porcupine. Years later he would write to his great friend, the critic Albert Murray: “Hunting is still a good way to live, man; and I’m glad that the instinct is still alive within me. It’s much healthier than this backbiting and verbal murder, character assassination and bitchery that seems to be the current mode among the intellectuals.”

The Vermont cold intensified. “I’ve damn near burned up all that wood we stacked in the garage,” he wrote to Fanny. He paraphrased T. S. Eliot: “I have known it, known it all, the mid-noon sunshine, the morning fogs, I’ve measured out my life in fireplace logs.”

He left Vermont in the fall of 1947 on a high note. A portion of Invisible Man had appeared in the English magazine Horizon and word of its brilliance had traveled. “People look at me a bit differently now, and an undertone of reservation comes into their voices,” he wrote to Wright.

Invisible Man made Ellison an intellectual celebrity when it was published in 1952. The reviews were rapturous; the novel remained on the bestseller list for 16 weeks. The author spent much of the next decade traveling to give lectures or attend writing retreats.

In August of 1959 Ellison returned to Vermont to teach at the Bread Loaf Writers’ Conference. He didn’t enjoy it. He complained to Murray that he was “exhausting myself with two weeks of alleged teaching of alleged writers and an even larger gang who don’t write but who hang around such conferences for the sake of entertainment.” He added, “I came down from there in a fairly sour mood, wondering how I had strayed so far on top of Robert Frost’s Kilimanjaro.”

His thoughts about Middlebury College were more sanguine, however. He’d spoken at the College in March of 1959, a few months before going to Bread Loaf. Ellison wrote to his friend Saul Bellow: “After a semester at Bard the good manners of the kids at Middlebury—among themselves as well as with teachers—came as a shock. What’s more, they seemed brighter than the poor schmucks hereabouts.”