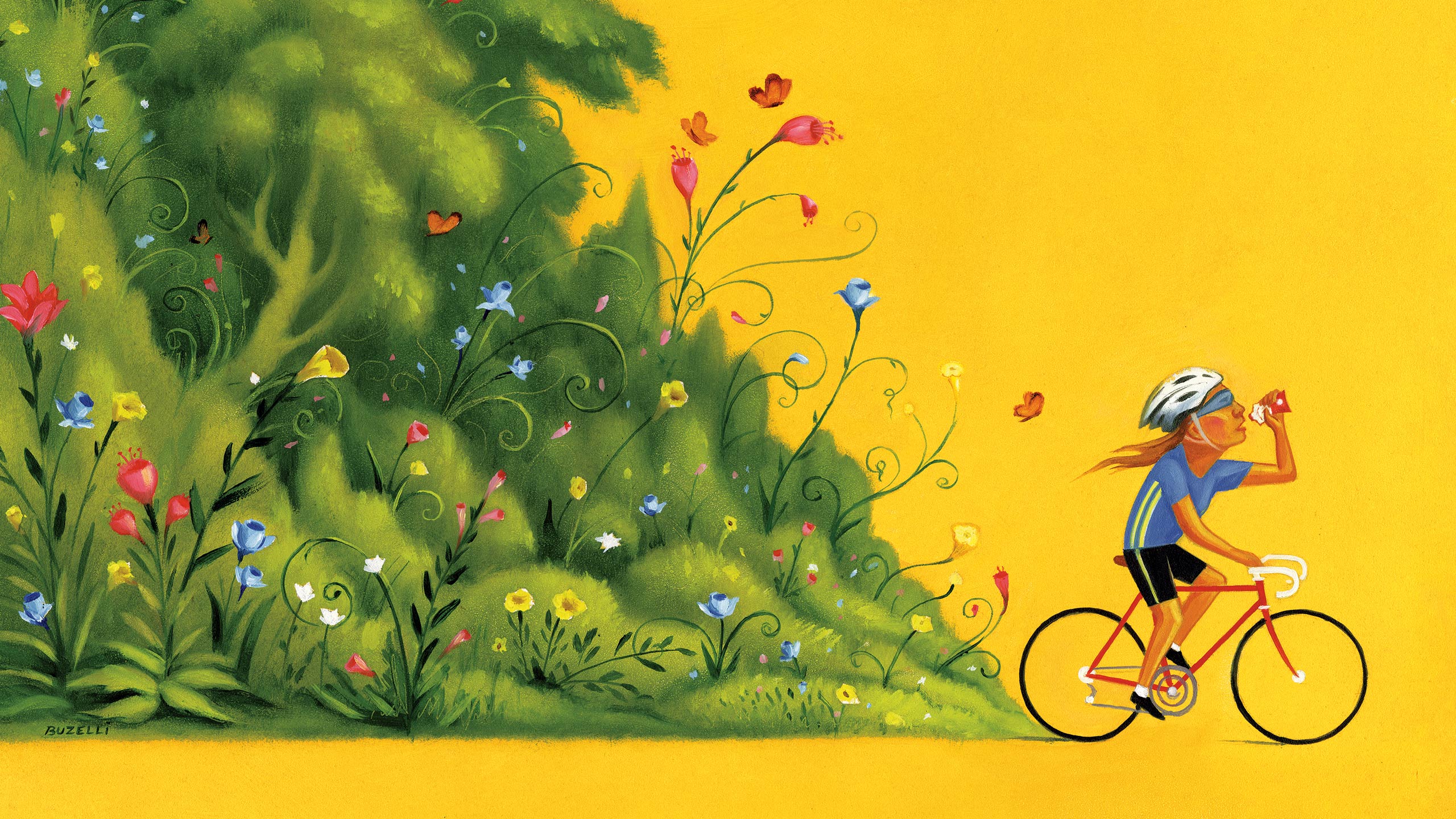 Strapping on her skis and moving slowly—by her standards—through a warm-up at Lake Placid’s Nordic Center, Heather Mooney ’15 does one lap around the stadium, then another, and finally heads out with her teammates for an abbreviated jaunt through the woods. It’s two days before the 2015 NCAA Ski Championships, and Mooney is exhausted. She’s battling a cold, which is sapping her energy at just the wrong time, and she doesn’t have the luxury of taking it easy. She’s running low in another department, as well.

“I have one more,” she says, opening a pouch on her blue waist belt and pulling out a packet of maple syrup. “We have one last late-day race, so the timing worked out perfectly.” Marketed as an “all-natural athletic fuel” under the label UnTapped, this particular packet of pure maple syrup is no homespun remedy but a relatively new product being touted as a natural alternative to synthetic sports gels. The founder of the company and self-professed maple syrup proselytizer—“I’ve been preaching the gospel of maple syrup for years”—is Ted King ’05, a cyclist who competed professionally for nearly a decade.

A native New Englander (a rarity in professional cycling), King earned a quirky reputation on the cycling circuit for being the “syrup guy,” never failing to pack a couple of gallons of the sweet stuff and always having some on hand at mealtime. “It’s not commonplace in Europe,” he says, and what is available tends to be the corn-syrup-based alternatives, which King dismisses as fake syrup. But it wasn’t until a training ride in 2012 that King realized maple syrup’s potential as an energy supplement.

The previous summer, King and fellow pro cyclist Tim Johnson had successfully cycled the length of Vermont’s Route 100—dubbed “200 on 100” for the 200-mile trek—and had set their sights on another 200-mile ride: from Burlington, Vermont, to Portland, Maine. In advance of the new challenge, playfully called “200 not on 100,” King and Johnson got the word out about the ride and as they pedaled across northern New England, they were greeted by cheering crowds along the way. As they neared the halfway point, while zipping along the Kancamagus Highway in New Hampshire, they encountered a man waiting on the side of the road—with gift baskets for each rider.

Among various sundries, such as a 16-oz. can of beer, was a mini-container of maple syrup. In an attempt to replace at least some of the 1,000 calories per hour they were burning—and stay sober—they downed the syrup.

“That was probably the first time I really, truly chugged maple syrup on a ride,” says King. The performance benefits seemed clear, he adds, citing a noticeable energy boost. Why not try and replicate it? King began stopping at mom-and-pop syrup stands along his bike routes, buying novelty-size nips and tucking them in his jersey.

“It wasn’t the safest thing in the world,” he says of the glass vials that would surely shatter during a fall. So, aiming to avoid maiming, he started looking for alternative packaging. At farmers’ markets he would show syrup makers his traditional energy gels and ask if they could get their product into a similarly manageable form. He was met with stares of confusion and sent on his merry way. For more than a year, no one seemed to take him seriously. Then King pitched the idea to Andrew Gardner, a friend and amateur cyclist.

At the time, Gardner was the Nordic ski coach at Middlebury, and he had his own syrup stories. Vermont ski racing has more than its fair share of traditions, one of which involves handing out jugs of syrup as podium prizes. “I saw the winners from Saturday’s race chugging maple syrup and then skiing long distances on Sunday,” Gardner says, an observation seconded by Heather Mooney. “Chugging syrup is definitely a thing,” she confirms, especially on the men’s side. It’s a practice that Gardner had noticed but had never really thought about—until King approached him with his crazy idea.

Andrew Gardner was not only enthusiastic about King’s idea; he proved adept at solving several of the logistical problems King had encountered, such as sourcing the syrup itself. He introduced King to Roger Brown, Doug Brown, Tim Kelley, and Jimmy Cochran—first cousins who are descended from Vermont skiing royalty. The Skiing Cochrans, as the family is known, have competed internationally for two generations. The four offspring of patriarch Mickey all skied in Winter Olympics (daughter Barbara Ann won gold in 1972), while the next generation has placed six family members on the U.S. ski team. Mickey and his wife, Ginny, also built a small ski area on their property in Richmond, Vermont. Now operated as a nonprofit, this literal mom-and-pop ski hill, with its three lifts and eight slopes, is a bucolic hive of family activity each winter. It is also surrounded by 20,000 maple trees, and in 2010, four of Mickey and Ginny’s 10 grandchildren started tapping the trees and opened a sugarhouse that would produce their signature Slopeside Syrup.

The Cochran cousins loved the idea of syrup-as-energy-fuel, and with King and Gardner, the cohort began scouring the country to find a partner who could package Slopeside’s product in small, on-the-go packets. (The supplier remains a closely guarded secret, says King.)

Next, they turned to crowdfunding platform Indiegogo, where they crafted a campaign that was less a charity plea and more a pre-order system. (“We really wanted this to be a proof of concept,” explains Gardner.) The initial ask was $35,000, and in the days before the launch, King was approving drafts of the site while lying face down on a massage table between stages of the Tour de France.

The campaign blew past its goal, raising more than $50,000, which would fund production of 100,000 packets—though the fledgling company soon learned that there was greater demand for UnTapped than they had anticipated, particularly as customers kept finding new uses for the product. “We’ve heard of expectant mothers using it in labor,” says King. Paramedics have also used UnTapped to treat diabetes, and people report taking it along to diners so they don’t have to use “artificial” brands on their pancakes and waffles.

Naturally, the UnTapped team swears by its product. “It offers the same nutritional benefits found in the very calculated, heavily supplemented stuff, but maple syrup is entirely natural,” King says, citing a laundry list of resulting benefits: antioxidants, low glycemic index (54), and high magnesium content, to name a few. For others though, the jury is still out. Burlington-based nutritionist Kimberly Evans, for instance, loves the idea of UnTapped and even bought it as a stocking stuffer for her partner last Christmas, but she isn’t fully convinced by the science. “I would really have to see some evidence-based research for me to be comfortable recommending maple syrup,” she says. Nonetheless, UnTapped has been flying off the shelves.

According to Gardner, UnTapped is doing well financially, though not to the degree that he, King, or the Cochrans can forgo any other source of income. And there’s still the risk of falling victim to the fad-prone natural foods industry. “We don’t want to become a stop on the trendy-sport highway,” he cautions, conceding that there is a bit of a novelty aura to the product. At least for now, though, the UnTapped upswing continues. You can find it for sale in L.L.Bean stores, and Olympic distance runner Ruben Sanca is the latest endurance athlete to endorse the product. “We’re an actual, legitimate business,” says Gardner. “It’s still one of these things where I turn around and say, this is crazy.”