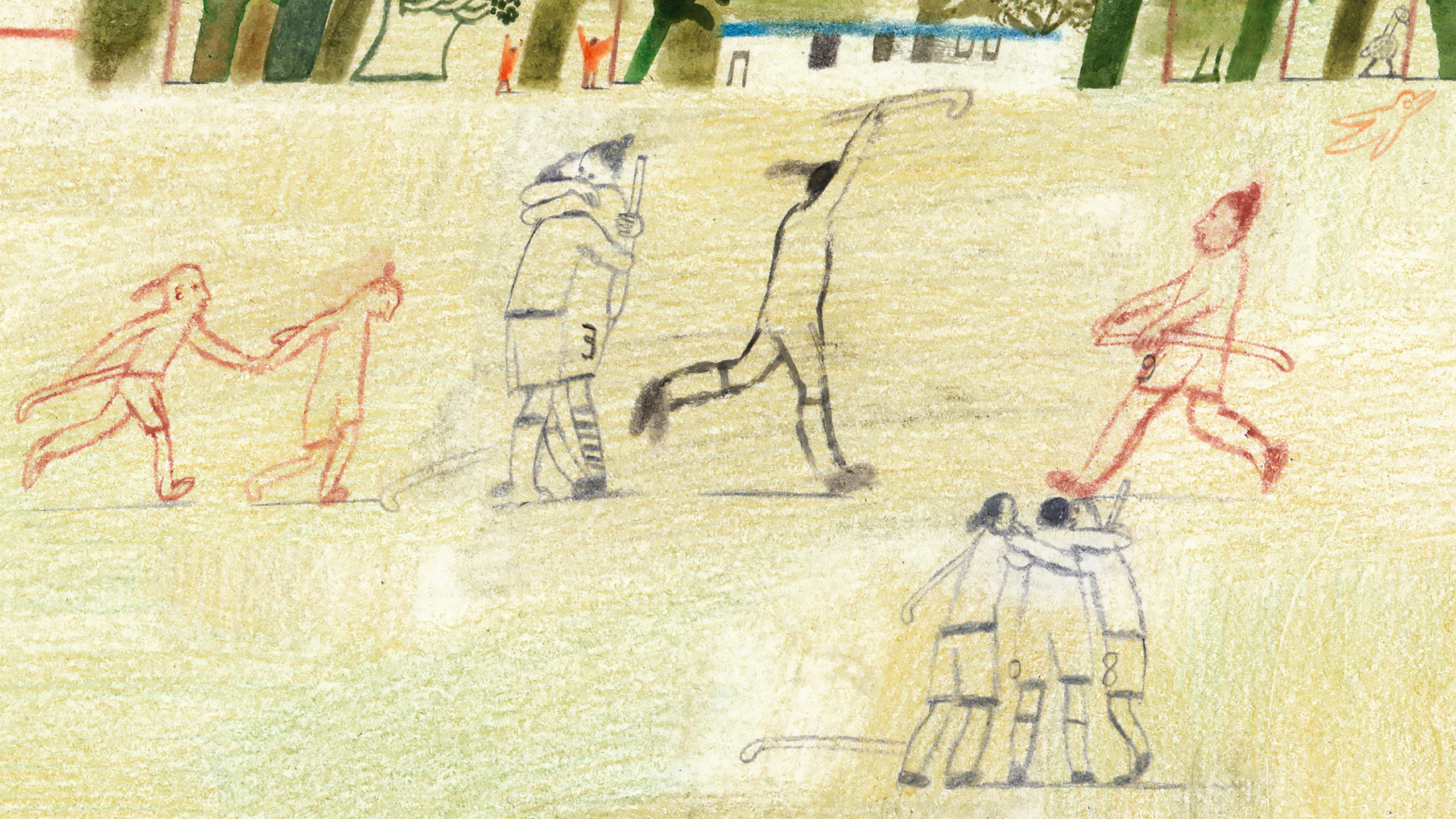 Two days after Thanksgiving and less than a week removed from winning the national championship, the Middlebury field hockey coaching staff found itself in a Crowne Plaza Hotel conference room just down the freeway from John F. Kennedy International Airport. The coaches—Katharine DeLorenzo, Rachel Palumbo, and Lauren Schweppe ’18—were joined by Lauren Greer ’13, Audrey Quirk ’18, Alyssa DiMaio ’15, and Anna Kenyon ’16, all former players, and for the better part of 12 hours, the group would conduct its final preparations for a trip six months in the making, one that would take them halfway around the world to the state of Jharkhand in eastern India.

Those last few hours before departing the States were a bit of a blur, DeLorenzo, the Panthers’ head coach, would later recall. And that’s understandable. The high of winning a national title—the program’s second consecutive and third in four years—had barely subsided when the coaching staff turned its attention full time to this other intensive endeavor (with a day of family and turkey eating thrown into the mix).

The prior summer, the U.S. State Department’s consulate in Kolkata had invited the Middlebury contingent to travel to Jharkhand as part of its Sports Envoy program. The coaches would serve as goodwill ambassadors, spending a week in the capital city, Ranchi, while conducting a field hockey clinic for teenage girls from the region. When DeLorenzo learned that more than 100 players would be participating, she requested that they expand their party beyond the three coaches, which is how the four alumnae became involved. She also requested—and was granted—a date change for the trip. The consulate originally wanted to bring the Americans to India in October. DeLorenzo, in a bit of wishful thinking that was subsequently fulfilled, responded that the earliest they could travel was after the 18th of November, the day of the national title game.

On that final day of prep in the hotel in Queens, the goodwill ambassadors were filled with nervous energy. They checked (and double-checked) that they had everything they would need to travel to a place they had never been to, and their minds raced about what to expect. What would life be like there? How would the girls receive them? How would the language barrier affect their teaching? The girls from Jharkhand spoke only Hindi; the Americans only English. (Each coach would have a translator provided by the consulate, and DeLorenzo would later marvel at how they managed to expertly bridge the language gap.) As part of their last day of preparation, the goodwill ambassadors spent nearly two hours teleconferencing with Middlebury President Laurie Patton, an authority on South Asian history and culture, who briefed the traveling party on what they could expect in one of the most remote regions of the country. (Patton had also recorded a short video, in which she spoke Hindi, that was to be played for the Indian teenagers.)

About 36 hours later, the seven Americans walked out of the small airport in Ranchi, Jharkhand’s capital city. Clad in all black—down vests, sweat suits, sneakers—the women were bleary-eyed but giddy. One of the coaches noticed a group of men, women, and children singing and dancing. That’s so cool, she said.

It was only when they erupted in a loud cheer at the sight of the group from Vermont that the Middlebury folks realized that the people were there—singing and dancing and cheering—to welcome them.

The state of Jharkhand is one of the most remote and impoverished regions in all of India, and it comes with a particularly nefarious reputation: as the home to rampant human trafficking, particularly of girls and young women. By one estimate provided by the state’s police commissioner, who helped facilitate the field hockey project, 60 percent of the young female population of Jharkhand are either trafficked into sex slavery and/or forced labor or bonded into forced marriages. And while the city of Ranchi is home to more than a million people, most of Jharkhand consists of jungle and rural villages, where the rate of trafficking creeps even higher than the national average.

With this in mind, the U.S. consulate in Kolkata had partnered with an India-based nonprofit anti-trafficking organization, Shakti Vahini, to craft the Field Hockey Project of East India, with the idea that American coaches would come to Jharkhand to lead a weeklong clinic for girls drawn from the region’s rural villages. (How Middlebury arrived on the State Department’s radar involved a great deal of serendipity. In the spring of 2018, Baishakhi Taylor, Middlebury’s vice president for student affairs, was traveling in India with four students when she learned of the future initiative. It’s a bit more complicated than this, but basically Taylor said, “I know just the people.”)

The official mandate for the program was this: “For the girls to gain self-worth and self-confidence, leadership skills, and an expanded vision for themselves of their own future. Another hope is each of the young people involved will become equipped to bring their expanded vision and new skills back to their communities.”

More succinctly, the organizers and, ultimately, the Middlebury ambassadors hoped to alter the script and upend the statistics, the ones that stated that more than half of the 106 girls attending the clinic would be sold into slavery before they exited their teen years.

The clinic was held at a multipurpose stadium in the Ranchi bedroom community of Hatia, a location that had previously hosted high-level sports matches (mainly cricket) and that boasted a turf field, one of only a handful in the entire state. In a way, the locale was an equalizer between the girls and the Americans. While DeLorenzo and her crew were adjusting to round-the-clock protection from guards armed with semiautomatic weapons, the vast majority of the 106 girls were coming from situations where hockey meant grabbing any type of stick to play on a dusty road or village center.

The differences melted away almost immediately, DeLorenzo says, “at least when it came to hockey.” Sitting in her office on a quiet day in December, with students gone for winter break, DeLorenzo gestures toward her window, where a portion of Kohn Field can be seen in the fading winter light. “It was just like a practice out there. It’s hockey. The girls were into it. Our women were into it. The translators were into it!”

The instruction—and the joy on the field—in Hatia would get so intense and immersive that for stretches of time, DeLorenzo says, it seemed that all that mattered in the world was what they were doing in that moment. And it dawned on her and the other coaches that that was their purpose: making the girls feel like they mattered.

On one of the last days in Jharkhand, the coaches quizzed the players on what they wanted to do as adults (part of the project’s goal of empowering the girls to believe that they could have a future). There was little diversity in their answers, though the most common response may come as a surprise. The girls did not dream of playing for the Nabhvarna, the national field hockey team. Almost all said they wanted to be policewomen. They wanted to be in control of their lives. (DeLorenzo says that when she told the state police commissioner about the girls’ answers, he wept.)

“We were not naive about what our impact would be,” DeLorenzo says. “We hoped that we’d be able to connect, and if we could connect then maybe these girls could think about their futures a different way.”

At this, DeLorenzo, sitting in her office half a world away, chokes up and then she, too, begins to softly cry. After a moment, she takes a deep breath. “I learned that it matters little where you go in the world; people’s desire to feel connected to others remains true. The human condition, the human spirit wants to connect.

“And from there,” she adds, “you want to believe that anything is possible.”