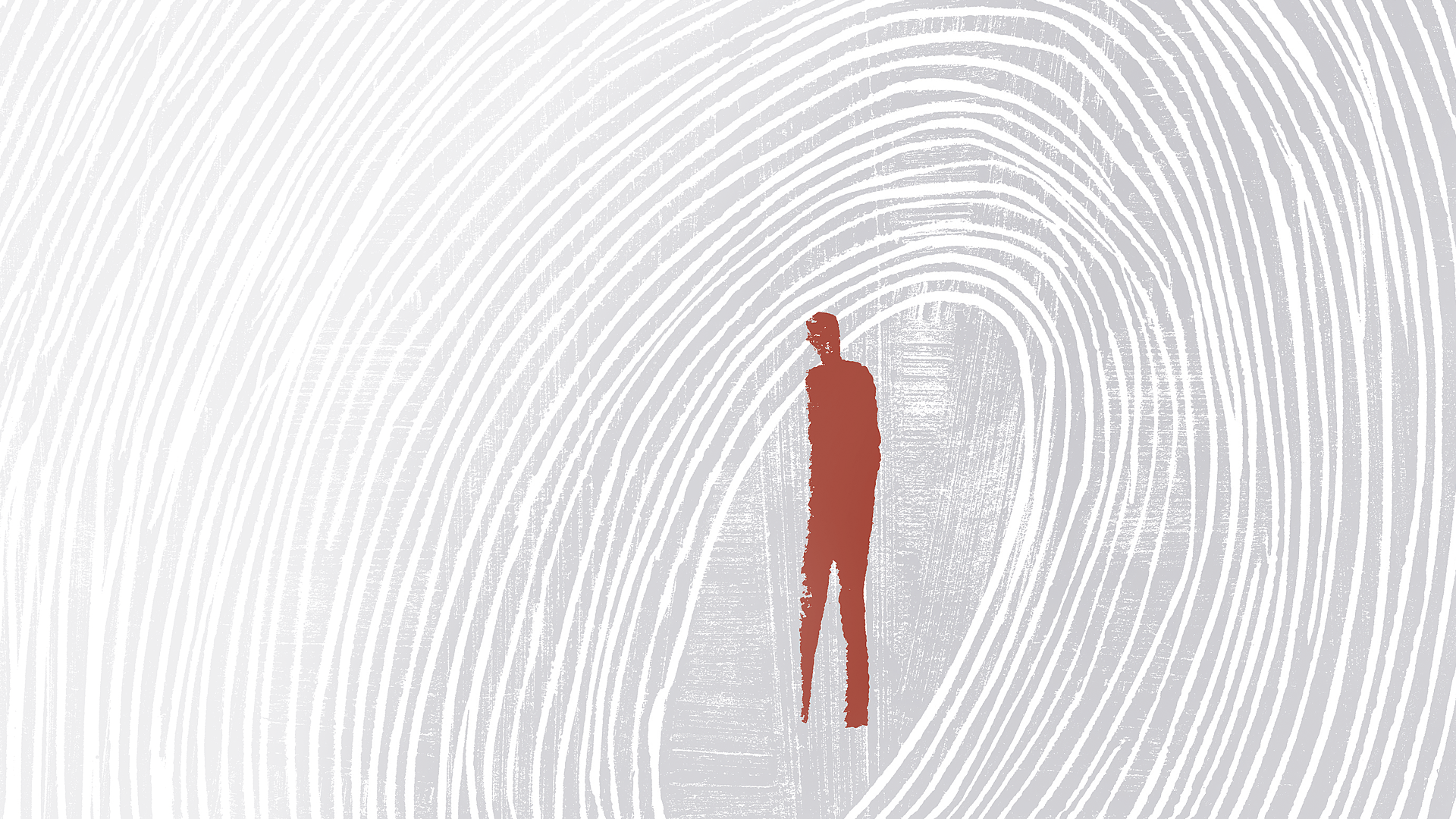 Life is uncanny. I was already feeling uneasy in March, as I approached the fourth anniversary of my cancer diagnosis. Fragments of memories were getting stirred up with the raw seasonal wind, in the lengthening light. It was Lent, as it is now; my emergency surgery happened on Good Friday, which, even then, I interpreted as an ambiguous sign. I do not like to remember that time, unless I can harness it in a poem or play. But then the present moment interrupted—with disease, and more importantly with fear of disease—and it seems as if overnight the world has disappeared into a chemo quarantine.

My wife, Jessica St. Clair ’98, and I were treated for cancer consecutively, with a month or so overlapping, from September 2015 to the end of 2016. My diagnosis came on the day of her final chemotherapy infusion; our oncologists share an office, so Jessica had only to wheel her beeping, blinking tree of IVs down the hallway to my exam room to receive the dreadful results of my PET scan. During our treatments our immune systems were massively compromised, so we did what everybody’s supposed to do now: we practiced extreme hygiene, avoided crowds—or small gatherings; or anybody at all, other than each other and our three-year-old daughter—and we stayed inside for what felt like forever.

Writers know all about self-quarantine. We go to work—that is, to the desk across from our bed (speaking for myself)—without brushing our hair, or even sometimes our teeth. I’d been a lifelong, dedicated handwasher; I was ready for this. But during my cancer treatment, isolation of a different order of magnitude was required. No trips to the gym, no scribbling at my favored outdoor café. I couldn’t travel to attend rehearsals or performances of my plays. Arrangements to read my poetry and teach at conferences and universities were cancelled or postponed indefinitely. Any career momentum, built over decades, quickly dissipated.

During chemo quarantine your life shrinks, naturally. You wake in your isolation to a keen awareness of the love you feel for those you’re locked inside with. And some of your old concerns have lost their meaning—relationship squabbles, writerly insecurities. (Unless your partner is abusive, of course, or your livelihood has been so disrupted that you can’t pay your bills.) In isolation you notice differently, and if you’re a dramatist like me then you notice people. Cancer clarified the characters of our friends. Many disappeared, became mean in their fear (I suspect that these are the same personalities currently sweeping supermarket shelves clean). But more relevantly we noticed who appeared, who wrote and called and left warm food at our door.

Then, as now, mornings in isolation arrived with the dawning realization of the dire predicament we were waking to. We thought: this can’t be our life. What happened? Where has it gone? Once out of bed we found some relief carrying out the essential activities that help to keep despair at bay. In the evenings we dosed ourselves with Ativan, THC; our TV, tablet, and phone screens. But afternoons in isolation were hardest; afternoons are for crying. That’s when—now, as then—I leave the house for my jog around the prison yard of my bucolic suburban neighborhood, except today everybody is doing what I used to do, hopscotching from sidewalk to street to grassy verge in avoidance of others, trying to maintain at all costs that prophylactic six-foot berth.

We need these brief, almost furtive forays into society because—of course—isolation breeds a creeping doom. Panic and claustrophobia feed each other. Depressions deepen, anxieties soar. You fear you will never get outside again, never feel safe in the world, or as safe as you may have felt before. I was lucky because my wife was already six months further along the wilderness trail of her recovery. So she could, and did, often tell me, even if she couldn’t promise: It’s okay, this has an end, you will get outside again.

But now isn’t then, exactly. I must remind myself. We were sick and now we’re healthy— “without evidence of disease,” in the common parlance; our doctors assure us that our immune systems are as strong as anybody’s. Now we can care for ourselves and each other and our daughter in ways we couldn’t before.

You fear you will never get outside again, never feel safe in the world, or as safe as you may have felt before.

Pandemics are by definition communal, and at the moment we’re feeling buoyed by the camaraderie of a public catastrophe. Of course we’re worried, too, that with enough strain this newfound solidarity will fracture if not shatter. (Americans are stockpiling—again—their guns and ammo, after all.) But for now we’re enjoying, somewhat against our will, an undercurrent of holiday. The hummingbirds are back; our notorious local air is almost preternaturally pure. The metaphor of a chrysalis is tempting.

Like many I’m also reminded of 9/11, the public catastrophe that may have caused or at least contributed to our cancers many years later, via the toxic dust and smoke we breathed for months. My wife was my girlfriend at the time, and she was living near the World Trade Center; I typically spent the night there with her. We joined the exodus uptown as the first tower fell; after the second tower disintegrated on the TV in my sublet in the East Village, I glanced out of the window and saw two young men tossing a Frisbee back and forth in a street empty of traffic, and I hated them.

It’s right to be suspicious of stories in which suffering—any kind of suffering—cleanses or clarifies anything or anybody. And I’m distressed to find myself entertaining some of the same fears and confusions I struggled with four years ago. So I’m trying to remind myself: how in our isolation did my wife and I stay hopeful or, when that failed, stoic and stubborn?

To begin with, I made myself ask for help—via emails and texts, phone calls when I could manage it. I sought out other writers, and old friends, even strangers, who’d endured what I was enduring, and from a distance we helped each other through each day and night.

I escaped into sleep; I descended into my dreams, waking in the dark to puzzle over what I’d found in my subconscious with a curiosity I’d never had before. I found some solace within.

I relied on metaphors: of war, primarily, though I’ve never been to war, and the analogy probably offends those who have, but imagining myself trudging muddily along on the grueling march of my cancer treatment gave me a shape for my turmoil, and a notion of a destination, however hazily conceived, far ahead.

I continued to create. In my case creating means writing, and it’s true I did less of it, and when I wrote I often wrote in bed like Proust (or Joyce, Edith Wharton, Noël Coward; apparently a lot of writers like doing it in bed). Reading was difficult—it felt indulgent, too passive an activity amid the disaster. But I remembered what I’d read. I thought of Samuel Beckett and his partner Suzanne sleeping in haystacks by day, walking by moonlight into the unoccupied zone of Second World War France (I thought of Didi and Gogo, for that matter, waiting beneath Beckett’s dystopic tree). I’m not a strictly religious man, but I imagined John of Patmos in his rocky hermitage, what he heard and saw of his Apocalypse, and how, for better or worse, he wrote it all down.

Jessica and I console each other now with what we think we learned the first time around: the catastrophe of illness, the suffering and isolation of its treatment and hoped-for cure, will soon enough feel normal, despite the pain. And then, eventually, one way or another, the pain that is normal will cease; there will be grieving, and celebrating, wondering if the experience of isolation has changed us too much, or not enough, as we return to our jobs, when we are able, to concerts and theatres, to cafés and friendships and passions messy with actual talking and embracing and kissing—and it’s the resumption of life that will shock us. And then that shock, too, will pass.

This essay originally appeared in the March 27 issue of the Times Literary Supplement and is republished with permission of the author.