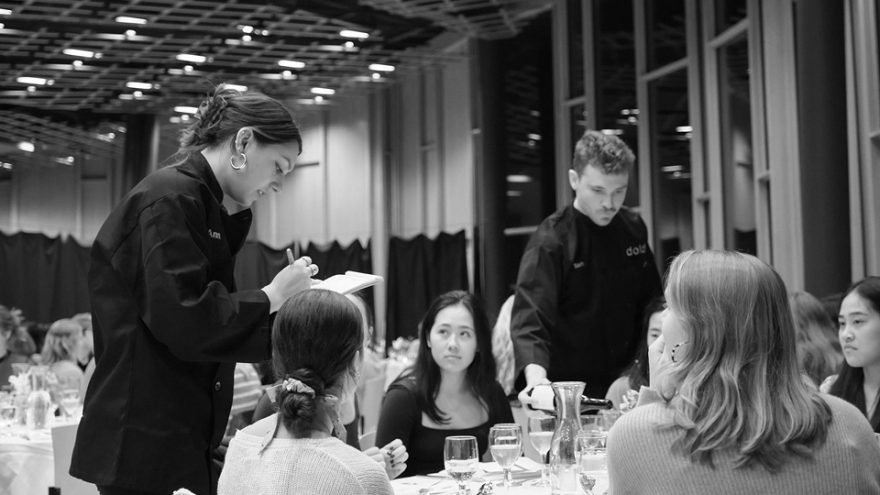 It was dinnertime on a cold Friday night in mid December. Finals were in full swing, and students, ready to eat, made their way across frosty pathways and the snow-crisped grass, emerging into Atwater’s brightly lit dining hall.

At the door, they were met with glasses of sparkling wine and then ushered to tables bearing plates of baked feta with citrus-marinated olives and charcuterie.

This wasn’t a collective fever dream brought on by all-nighters and exam stress. Rather, the group of 100 Middlebury juniors and seniors who gathered last month were enjoying a Middlebury student first: a four-course meal paired with locally produced wines, and running commentary and tasting notes from the winemaker, as the final offering of the season from Dolci, the student-run restaurant.

Dolci dinners, which are held semiregularly each semester, are one of the hottest tickets on campus—and for good reason. Access to a Dolci dinner is at no cost to students, but they must apply by lottery. Approximately 50 tickets are awarded for each meal, one for each student plus a guest. For the wine-and-food dinner, tickets were only offered to students of legal drinking age, which made it (slightly) easier to get a seat.

“Dolci Uncorked” was the brainchild of headwaiter Sam Lipin ’23.5. A classics major and Italian minor, Lipin spent last spring studying abroad in Italy, then met up with his father, who took him on a northern Italian natural wine tour at the end of his semester.

“After learning about [natural wine’s] biodynamic farming, regenerative agriculture, and minimal-intervention winemaking, and of course tasting the authenticity of what I was drinking, I was bitten by what they call the ‘wine bug,’” he says.

Over the summer, Lipin interned at the Addison Independent, where he connected through a story with Deirdre Heekin ’89, who runs the Vermont natural winery La Garagista with her husband, Caleb Barber ’88. Heekin invited Lipin and some of his colleagues at the Schmetterling Wine Shop in Middlebury to help with their fall grape harvest, and their conversations began to bear fruit.

“[Heekin] expressed a desire to connect the world of Vermont natural wine with Middlebury College and the wider academic world,” Lipin says. Soon, Heekin and the Dolci leadership team of Lipin, Daphné Halley ’22.5, and Sophia Giliberto ’24 went to work on the logistics and the menu, which included an arugula and pear salad with crispy chickpeas; shiitake and button mushroom risotto; and enormous glass bowls of chocolate mousse, based on a recipe from Halley’s French mother; each course plated and paired with a La Garagista wine, which Heekin introduced and discussed.

“[Our dinner] was the first step in [proving that] wine does not have to be … inaccessible to students due to … pretentiousness in the industry, the price of the product, or the alcohol content inherent in the beverage. At its core, and more so in the case of natural winemaking methodology, wine (and cider, mead, etc.) is an agricultural product, and to treat it as such brings a level of environmental consciousness and connection to the earth that Middlebury likes to promote,” Lipin notes.

Dan Detora, head of dining services at Middlebury, agreed. He told the team that as long as the students were of legal drinking age and brought valid identification to prove it, there was no problem with Dolci offering a wine pairing dinner.

As the evening wound down, the students, many of whom had dressed up for the occasion, lingered at their tables, taking final sips and, it appeared, appreciating the opportunity to step quite out of the normal student routine for an evening. “It’s been so nice to learn about something different,” says Aria Bowden ’23. “To meet and learn from a local Vermont winemaker was something so different. This has been great.”

Reuben Slade ’23.5, Lipin’s roommate, had attended several Dolci events and concurred that this one was particularly special. Most of the time, he noted, the event would have been long over by now, but the mature ambience of the evening seemed to resonate with the guests. “This is an entry into the future, how life can be for us once we graduate,” he said. “But yeah, to drink wine in Atwater … it’s weird.”