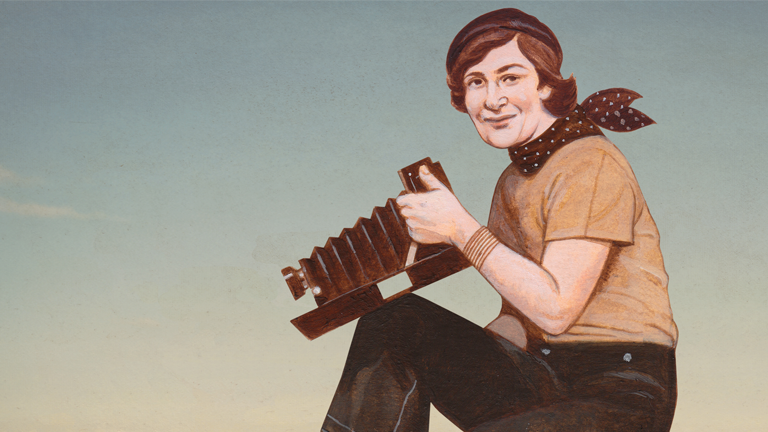 The resilient and intuitive photographer Dorothea Lange is best known for her work during the Great Depression and World War II. As a photojournalist, she followed the plight of California’s migrant workers during the 1930s and later the incarceration of Japanese Americans in the 1940s. She captured humanity at its most raw and despairing, and raised awareness of an existence that many were too often inclined to ignore.

Yet the woman behind the camera is far less understood than her iconic subjects.

In Learning to See, Elise Worden Hooper ’96 helps to address that. The story begins in present-day 1964 as Lange watches over her grandchildren at the beach and ponders her past. In her pocket is a letter from the Museum of Modern Art, the contents of which we don’t learn until later.

The story then shifts to 1918 and Hooper introduces a 20-something Lange, who is newly arrived in San Francisco and suddenly penniless after a robbery. Left with nothing but her ingenuity and New York experience as a photographer’s assistant, Lange sets out to find a job.

In this fashion, the chapters move between the 1960s and Lange’s early life as Hooper fills in the details and experiences that drove Lange’s career as a preeminent photojournalist.

Hooper’s style is engaging. She depicts a strong-willed woman slightly out of step with the world around her. Lange was more brusque than demure, dangerously free-spirited, and far less obedient than others—most notably her government employers—would have liked. She was not a great wife and struggled even more as a mother. Where she excelled, though, was in her passion to show truths through photography.

It was that passion that pioneered the genre of documentary photography. Her early photos of migrant workers and their families compelled the Resettlement Administration to pay more attention to the needs of a desperately poor population. Her later work with the War Relocation Authority documented the mass evacuation and internment of Japanese Americans. She ruffled feathers, challenged authority, and pushed the limits. But she always got the shot she wanted.

A careful researcher, Hooper has realistically recreated a life and interwoven her own perceptions of what motivated and inspired Lange. She also captures the remorse Lange feels in her later years of missed family connections. Hooper’s story is a welcome and accessible way to learn about who Dorothea Lange really was.