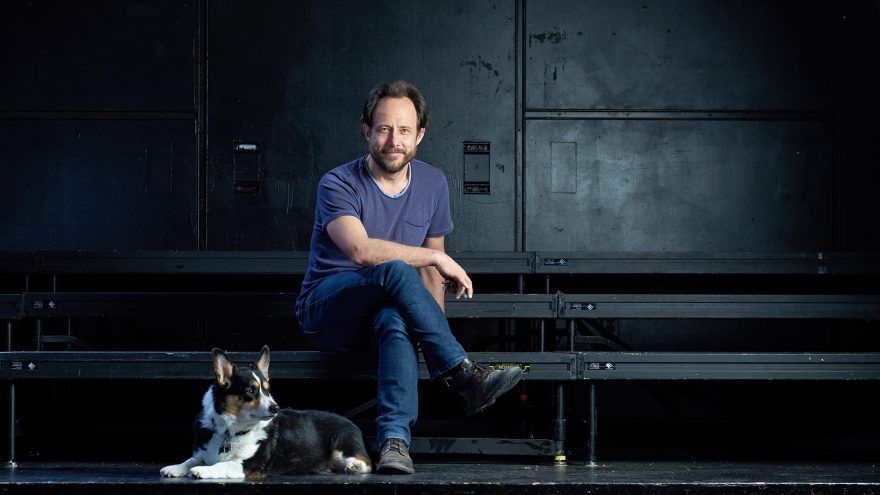 Alex Draper ’88 is an associate professor of theatre at Middlebury and founding member of the College’s off-Broadway theatre company, Potomac Theatre Project/NYC, where he now serves as associate artistic director. For more than 25 years, he has performed on stage, in film, and on television, and the magazine recently caught up with Alex (and his corgi, Frodo) to talk about his acting life, a recent role in a hit television series, and plans for his sabbatical.

You know, Frodo has upstaged you in this photo.

Of course. That’s what he always does; it’s his job.

He was a natural.
He takes direction very well.

So, I want to start by asking you about the arc of your job—in the course of a year, you can go from the classroom to off-Broadway, to the set of a network television show…
It may seem disparate, but I see everything as being connected. What we do off-Broadway with the Potomac Theatre Project (PTP) fuels what we do in the classroom, providing this amazing experience not only for those of us on the faculty, but for students as well, to work with Equity actors and to perform out there in the world.

And then you come back…
And then we come back each fall, and everyone is enriched from having had that experience.

Except last fall, you had a brief interlude between New York and Vermont.
That was so much fun, and it fit perfectly between the end of the PTP season and the beginning of classes.

We’re talking about your guest role in the NBC television series Taken. Was it hard to transition from the stage to screen so quickly?
Well, we’re trained to do that. If you’re an actor, you may be on stage every night and then auditioning the next day for a TV part. You
just adjust to whatever medium you’re in.

You had a fairly significant role in this episode.
It’s the first time I’ve ever had a stunt double—there was a lot of action involved, and a lot of long days filming in the woods. Making a one-hour television drama is a lot like shooting a movie in two weeks. It’s very intense but also a lot of fun.

And I understand some folks you worked with will be coming to Middlebury this spring?
The episode’s director, Stephen Kay, is coming to work with my acting class and with David Miranda-Hardy’s directing class. It’s going to be great, and it’s yet another example of how people in this industry can be really generous with their time and energy.

Next year, you’ll be on sabbatical in Bordeaux. What will you be doing?
I spent 10 years of my childhood in France, and I really look forward to living there again, living with my family, and not just visiting. Professionally, there are a lot of exciting possibilities. I’ll be collaborating with one of my high school friends who is a playwright and actor. We’re going to be adapting a play he has already created, adapting it to English, but not the way that you’d think. We won’t be translating it; we’ll be recreating it with bilingual actors. He uses this technique where he writes what is unfolding on the stage, presenting themes, and then using prompts leading, essentially, to a collective writing process. He did it in French, and now we’ll do it in English.

Will there be a part for Frodo?
[Laughs.] We’ll see.