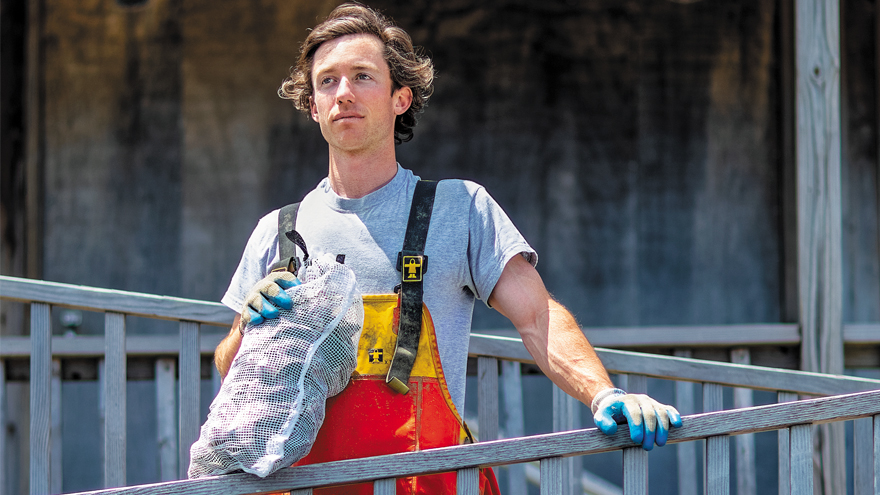 Will Peckham ’14 lifts the hatch door on the upweller just off the dock and reveals a row of wire silos suspended in the bay water, each holding what looks like thousands of tiny oysters.  “Actually about 40,000 to 50,000 in each one,” he says. Next to each silo a size is listed: 1 millimeter, 2 mm, 3 mm. It’s his job to watch the oysters’ growth, as they graze on the phytoplankton in the water, and move them along in the process of becoming full adults. As they grow from one millimeter to two, he keeps track, handling them each week and sieving them to separate them into size classes before restocking. When they are between one half inch and three quarters of an inch, he’ll move them into cages farther out in the bay, where they’ll continue to grow until they are big enough to be taken out to the oyster farm in Great Peconic Bay, between the North Fork and the South Fork, or Hamptons, of Long Island, New York.

Peckham is the co-owner, with Walker Lourie, of the West Robins Oyster Company. The idea to establish their own oyster business was seeded one hot summer weekend in 2015, when Peckham, who was working on Wall Street at the time, went with some mutual Middlebury friends to visit Lourie where he was working, at the Fishers Island Oyster Farm. Not knowing anything about oysters, Peckham saw a pile of about 15,000 market-sized ones and thought, “This is the coolest thing I’ve ever seen.” It brought him back to his childhood, when he spent time on a trawler with his parents, cruising between coastal Maine and the Bahamas.

Working on Wall Street seemed a natural move for an economics major after graduation, but Peckham was also on the lookout for an entrepreneurial opportunity. As an undergraduate, he had worked at the Center for Social Entrepreneurship. But it was an internship his junior summer with Beartooth Capital in Montana, a company that uses capital to buy ecologically degraded cattle ranches and restore their ecosystems to make them viable, that really excited him. “I became aware that a niche existed where you could work in a business and have your goal be both making money and helping the environment. It was an absolute no-brainer.”

He bided his time on Wall Street until the right opportunity came along. Oysters intrigued him, and Lourie was a willing partner for a new venture. Peckham read all he could about the oyster business and researched what it would take to start a company. How much would a boat cost? How many oysters would they need to grow? Where would they grow them? The customary tactic was to lease a piece of water from a municipality. But you have no claim over it, and he wasn’t excited about starting a new business that way.

The catalyst to get the start-up under way came when Lourie found a property they could buy for $30,000, a 225-acre piece of Peconic Bay. It felt like the right move to acquire it, so on a Friday, Peckham took the train out to Long Island, met a guy on the beach in New Suffolk, and did a handshake deal. “Then we really started planning our jump.”

With the property and the permits that they needed, Peckham and Lourie got to work. “Looking back,” Peckham says, “we made mistakes typical of beginning farmers.”

For one, they planted their farm right before winter. Peckham found the largest seed they could buy to shorten the growing cycle, but it still ran longer than they anticipated. And they encountered a serious issue—their farm was in a naturally productive scallop area, where baymen caught the commercially valuable scallops by towing steel dredges—and it turned out they were towing them right through the oyster farm. A newcomer to the bay, Peckham realized he didn’t have much credibility to confront the baymen. So he picked up a 24-pack of Budweiser and drove to the home of the leader of the Town of Southold Baymens Association. He said, “Hey, we just started this oyster farm. What can we do to stay out of your way until we get it figured out?” The bayman pulled out his chart and Peckham drew a map of the farm on it. Since the farm only needed five acres at the time, they figured out where it could be out of the way of the scallop fishermen. He and Lourie resited it to what became an even better spot.

Other setbacks have occurred, but with resilience, ingenuity, and a lot of sweat equity, Peckham and Lourie have found answers, and this year’s crop is on track to produce about half a million oysters. A viable client base of restaurants in New York City and on Long Island are eager to buy. But it’s not just the money that Peckham thinks about. He loves the fact that oysters are environmentally beneficial. They filter the water as they feed, and they are an ecosystem facilitator. “When we put in the oyster equipment with the oysters, it creates an artificial reef that attracts all kinds of juvenile marine organisms. Not only do people pay us for the oysters as food; we are also providing a ton of benefits that extend from biodiversity to potentially providing some of the tools to combat climate change and ocean acidification over time.”

In looking to the future, Peckham thinks shellfish farming is “really just beginning to have its moment in the sun.” He sees two broad themes emerging. “One is to reduce the cost of producing a really high-quality product through mechanization, much the way it’s been done in conventional agriculture.” (He has already designed and has in production one mechanical tool.) “And then on the demographics and the marketing side of things, how do we get Americans to eat more oysters? They have been a lost component of the American food culture ever since the demise of the expansive wild beds of the late 1800s, when oysters were so prolific they were every man’s food.”

The excitement of a start-up is that it’s ever-evolving, and Peckham is not short on ideas of what the future may hold. Clearly, he has found the entrepreneurial niche he was looking for where he can combine profit and purpose in a sustainable way of doing business. 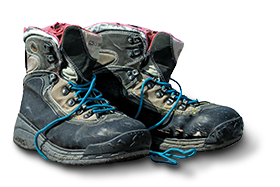 Fishing is Peckham’s favorite hobby—fly-fishing, conventional fishing, spearfishing, all kinds. “Since I was a boy I’ve been really interested in the process and in the kind of mental games you play. Where are the fish going to be? What will they be eating? These boots have gone with me to fish in California, Montana, and even Otter Creek in Middlebury.” 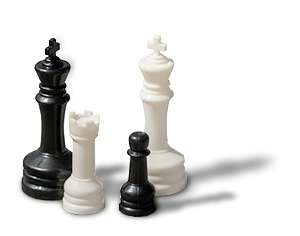 Introduced to the game by a friend, Peckham is hooked. “It’s so cool because chess is one of those games that it’s hard to get bored by. I like that it has a lot of applicability to different parts of life and business: a really good chess player is always analyzing opportunities, costs, and likelihoods of success. With just a few pieces with specified moves, you can have millions of different outcomes.” 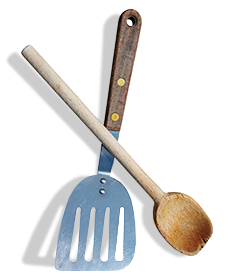 Peckham loves to cook. He’s fascinated by the process by which raw materials end up as a meal. He has read a lot of chef memoirs and cookbooks, but the one that made the most impact on him is Samin Nosrat’s Salt Fat Acid Heat. “It’s a cool book about cooking intuitively with those four levers. Cooking for me is a way to fill up my spare time. If I have four hours to kill, what kind of really delicious braise can I put together?”