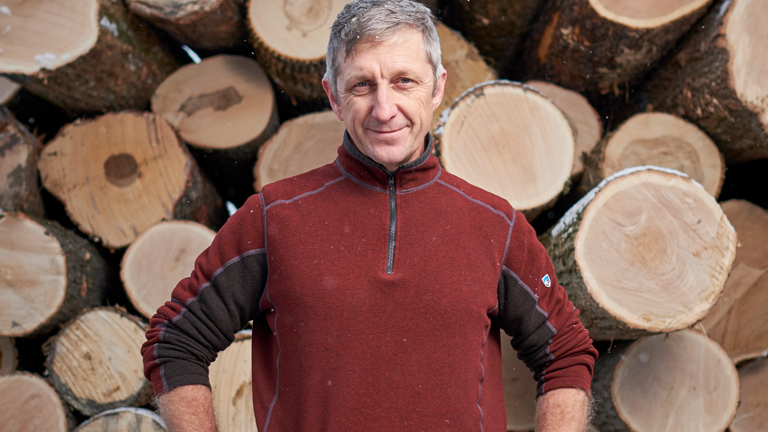 John Anderson ’94 didn’t set out to be a log broker. He tells it like the punchline to a self-deprecating joke: Major in art history and “that’s how you end up horse logging.” In fact, horse logging was one step on the road to his current career as a log broker; today, Anderson owns Canopy Timber Alternatives in East Middlebury, Vermont. Anderson is a matchmaker, sourcing lumber from a 100-mile radius and then selling it to very specific markets, sometimes halfway around the world.

On a crisp December day at his log yard, the ground frozen and lightly dusted with snow, Anderson pointed out a pile of ash bound for New York, destined to become baseball bats. Hard maple was bound for China, where it would be turned into skateboards. There were future railroad ties among the mixed hardwoods. A few lengths of white oak would head first to a stave company in Ohio, where they would be turned into barrels, and then return to a Champlain Valley distillery to age local whiskey.

“A log can end up next door, or it can end up however many thousands of miles away,” Anderson said.

Anderson did his own fair share of traveling after graduating from Middlebury. He headed west to work for a hunting and fishing outfit in Wyoming for a year, his first serious introduction to working with horses. Lured by the romanticism of working the land, he next secured a job on a farm in Germany. When the farmers and their teams of horses headed into the woods for off-season logging jobs, Anderson tagged along as grunt labor.

“At the time it was just a job,” said Anderson. “And then I fell in love with the actual logging.”

Back in his home state of Maine, Anderson got to thinking. He loved being in the woods, taking his lunch in remote stands of quiet trees. “There was also a business niche,” he said. More and more landowners and foresters were looking for a low-impact way to harvest timber. Horses were easier on the land, able to shoulder between trees where larger logging equipment might demand a road.

Anderson figured Vermont was progressive enough—and the logging industry there small enough—to test his plan. He sat down and wrote a letter to every county forester in Vermont, peddling his services as a horse-powered logger.

Exactly one wrote back. And that’s how Anderson found himself settling just down the road from his alma mater.

Anderson spent a decade driving his team into the woods on logging projects. But as his family grew—Anderson and wife Theresa have four children—he found that the lure of the woods gave way to new priorities. He wanted to be closer to home. He started working on the side with a log buyer, one of the first in the area to tap into international markets. Soon he was purchasing stumpage jobs—trees that needed to be cut—and hiring friends to do the logging. In 2004, Anderson bought a dormant log yard, and his log buying business snowballed; within a few years he’d hung up the reins and was working as a broker full time.

Today between three and four million board feet of timber pass through his East Middlebury outfit every year. Canopy has five employees and a bookkeeper, and subcontracts logging jobs to three crews.

And though he knows it might sound strange to some, he loves the material he handles every day; Anderson scales and grades every log that comes to his yard.

Maybe it’s the art history major in him: he reflects on all the years that go into a tree’s life, and the cyclical growth of forests. From his office at his log yard, heated by a roaring wood stove, he thinks about the distance these logs will travel.

“They can be cut right here in Addison County and end up in southeast Asia,” said Anderson. “I love that whole part of it.” 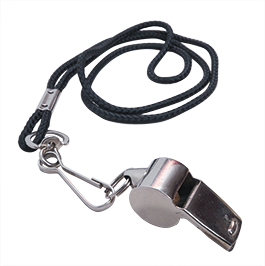 Anderson started coaching local youth sports when his oldest daughter, then five, took up soccer. “[Rec league] is looking for anybody with a heartbeat who will volunteer to do it,” he says. Anderson discovered he loved coaching, and he’s done it ever since. “More people in town would tell you I’m a soccer coach than a log broker.” His youngest, now 12, has one more season of middle school soccer ahead of him, and then Anderson anticipates hanging up the whistle.

Anderson grew up fly-fishing in Maine. After a long hiatus, he is finding his way back to the water. “If it’s a really nice morning and the river is up, I’ll fish my way to work,” says Anderson, who lives a 15-minute walk from the log yard.

Several years ago, Anderson’s oldest daughter came to him and his wife with a request: She wanted to put on a play for her preschool. For the next seven years, every summer the Andersons wrote and directed a children’s play, casting their four kids and the kids’ friends. The little troupe would stay at the Anderson house for a week, rehearsing and building props, before performing for the local cooperative preschool. “This is seriously the coolest thing we ever did,” says Anderson. 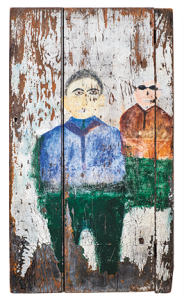 Anderson keeps a burgeoning collection of local amateur art—including this piece, which he scooped up at a garage sale. It was painted in the ’50s by a character known locally as the Drunk Farmer, who allegedly spent more time painting (and drinking) than he did farming.