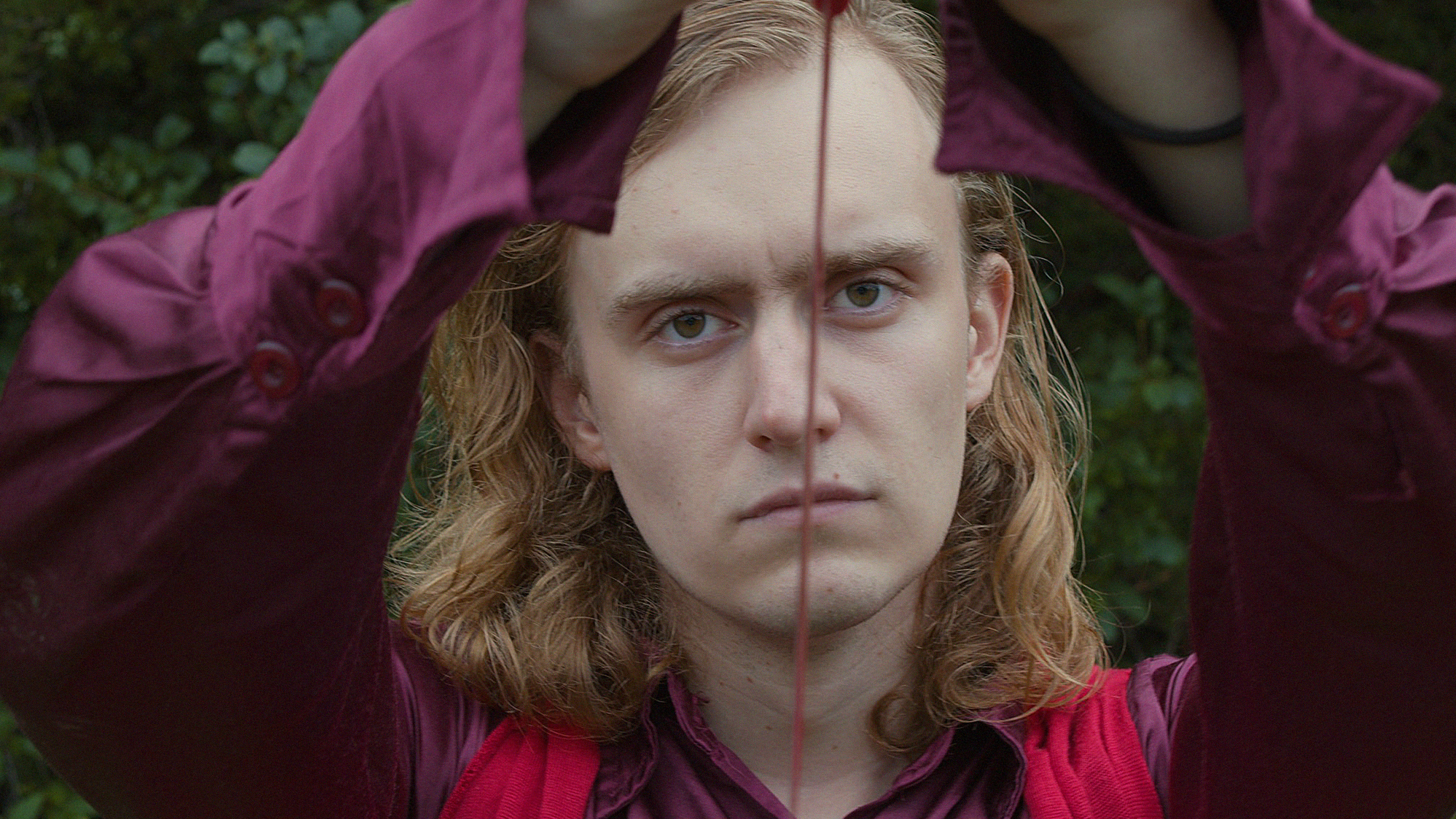 “Basically, because the old council transcended to the higher plane, we, the new council, have to shed some blood to ordain ourselves in the eyes of the Lord,” says Father Chetin, the new, young leader of the cult.

“Wait!” exclaims Sister Delilah. “We have to kill ourselves?”

“No, no,” says Father Chetin, “just shed some blood, like slice a palm or something.”

This scene in Episode 2 of The Deli People, a series on YouTube created by Cole Merrell ’21 and Jacob Morton ’21, is emblematic of the sometimes solemn yet often very, very funny scenes in the show, which they have labeled “A Cult Comedy about an Actual Fictional Cult.” The series came about because the two friends, who often collaborated on writing projects during college, decided they wanted to create something larger than the sketches they’d been producing for their group, Middlebury Discount Comedy. After an unusual senior year, they both felt like spending some extra time enjoying Middlebury after graduation, and it seemed like a good opportunity to work on a series.

Jacob had an idea he took to Cole. “I really like sitcoms,” says Jacob. “And I thought wouldn’t it be funny if someone made a sitcom about something strange and counterintuitive-like. I’ve always been fascinated by cults, and I knew Cole would think the idea was at least a little funny. I presented it to him, and we couldn’t stop talking about it. And then Cole brought the dramatic heft and weight to it saying, let’s treat this more seriously and not make it a laugh-tracky sitcom.”

The result is a wonderful mix of poignancy, serious moments, and laugh-out-loud comedy. After earning a grant from MiddChallenge at the Innovation Hub for their idea, they researched cults and their practices. They were also aware of a deli in Rutland, Vermont, that is run by a cult. “Part of the egg for me was the unusual idea of the juxtaposition of cult and deli,” says Cole. They decided to make that the basis of their series and ran with it, creating the cult “The Gardeners of His Immaculate and Gaping Chest Hole.”

As Brother Pastorius tells us in Episode 1, the Garden is based on two things: “One, the establishment of God’s paradise here on earth, and two, the making and serving of delicious deli sandwiches at a reasonable price point.”

So many components of producing the series ended up being fortuitous opportunities, including the writing. Jacob and Cole had a week after graduation before being moved into summer housing, and Jacob was still in his Atwater suite. “I was the only student in the whole building. It was like The Shining or something.” The two took over a common space with a massive whiteboard, which they covered with goals and ideas. The story took off, and even though they hadn’t finished every episode by the end of the week, they knew everything that was going to happen in the series. It helped that they also knew the actors who would play the characters.

“We knew which of our friends were going to be in the area during the summer, so we kind of wrote the characters based on them,” says Jacob. It wasn’t difficult to convince these actors, both graduates and current students, to take part in the film. “We’ve worked with so many of them in the past at Middlebury that we all trusted each other in a way that we wouldn’t have asked them to commit so much time if it was something we didn’t really care about.” In fact, their friends were also crucial in revisions of the script—Cole and Jacob would do read-throughs with them, get their thoughts and ideas, and go back and rewrite the scenes.

They also realized they would need other characters. “We needed adults to make the world of these kids feel real. We wanted it to feel like there’s a reason these are young people but there are also older people in their world,” says Cole. One of the main characters is Detective Whit Dickens, who ends up investigating the cult. They hoped to convince Alex Draper ’88, professor of theatre at Middlebury, to play the part. “We didn’t ask him until late in the process and we should’ve asked him earlier,” says Jacob. Cole adds, “We’d written the part for him, so we had to beg. Luckily he liked the script.”

Another key part is the sheriff in town, and they thought of Craig Maravich, a local actor who teaches at the College and at the Bread Loaf School of English. Cole had seen him in productions in town and knew what an excellent actor he was. Cole and Jacob didn’t want to delude themselves that he would say yes, but he read the script and was very enthusiastic. And he had a suggestion for his deputy sidekick: musician Clint Bierman ’97.

We first meet Sheriff Eisenhower and Deputy Harding when they come to the cult’s deli to check things out: not about the cult, however. They are there to “scope out the competition.” Every year in August at the county fair, there is a competition to see who makes the best sandwich in Vermont. And as Brother Pastorius says, the policemen’s union “makes a mean pastrami on rye.” Craig plays the obnoxious sheriff expertly, and Clint is hilarious as the bumbling deputy.

Many factors fell into place with what Cole and Jacob felt was incredible good luck, including the ability to use various locations around Middlebury for their scenes. But one constraint that often made filming stressful was time. The adults, with their busy lives, could only offer so many hours for the show. Clint and Craig’s scenes were all shot within a three-hour time frame. And several of the young actors, like Wynn McClenahan ’22, who plays the main character of Ruby, were only in town for a few weeks, so the schedule was tight. At one point they all arrived for a nighttime scene at one venue, the Middlebury Chapel, only to find it locked. They really needed to do the filming that night, especially because they had a lot of extras showing up. “So we called Public Safety and asked if they could open it up for us. And they just came and opened the door,” says Cole. “There were so many moments where the schedule was tight enough that if something didn’t happen, we were never going to get that scene.”

Another helpful aspect was the knowledge Gibson Grimm ’22 (who plays the very funny, over-the-top Brother Pastorius) had about filming. “He was there for every shoot because he was the director of photography and it was his camera and he was the expert,” says Jacob. Jacob and Cole also did a fair amount of filming, and when it came time to edit, the three of them collaborated on every scene. By then they had all left Middlebury, so Cole and Jacob did the first pass-throughs on the various episodes, and once an episode was ready to view, they would Zoom with Gibson, watch it, take notes, and confer. “We did that for weeks and weeks and weeks,” says Jacob, “until the episodes all got to a point where we were like, they’re looking pretty polished.”

The result is an extremely entertaining series, with easy-to-watch short episodes that challenge you to watch just one. And an added bonus is the music that accompanies the show. The very talented Emily Ma ’21, who plays Sister Delilah, composed and recorded the majority of songs, but Clint Bierman also provided them with some of his work, and they attained the rights to some other songs from original artists. As Jacob says, “The music just adds a whole other level—it fleshes out the episodes.”

Cole and Jacob have been overwhelmed by the positive responses they have gotten about the series. And when asked if there are other projects in the works, they admit they do have one project, which they actually started before The Deli People, that they are excited to get back to. And, Cole adds, “I would say we could probably tease in this interview that in the immediate future, people might have not seen the last of the deli people.” We certainly hope not.

In fact, keep an eye out for a Christmas special starring the deli people (who celebrate Christmas on February 26, for some reason), which will be released in March.