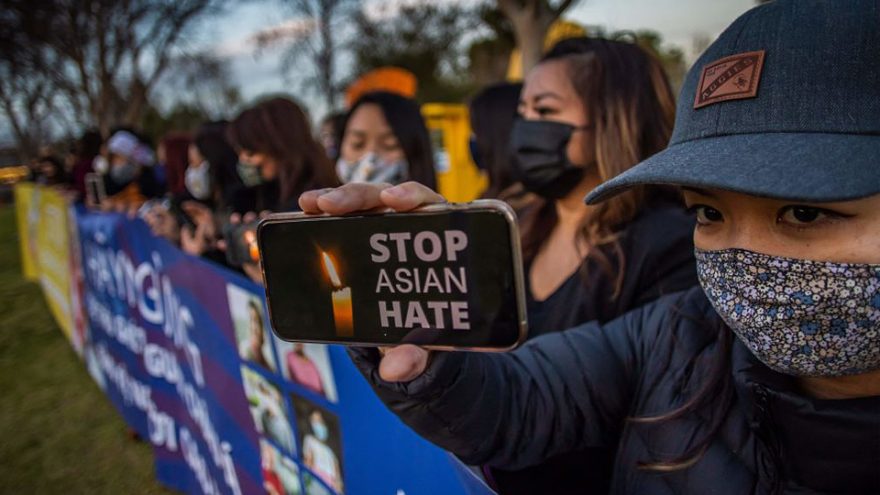 I looked up — mid-bite into my noodles — at my mom, whose matter-of-fact tone surprised me. She paused.

“I don’t feel safe here,” she continued, more wistfully. “And it frightens me when you’re away.”

It broke my heart then. But this past week, it’s broken my heart a lot more.

I grew up on Lincoln and 19th in the Sunset District of San Francisco, where wisps of morning fog would tumble into the city at first light. The district is bounded by Golden Gate Park on one side and Ocean Beach on another. It is home to San Tung’s famous fried chicken wings, legions of boba shops and a good portion of San Francisco’s Asian-American community.

It’s where the salon of a’yi stood — where I sat sobbing after I had lost my parents in the crowd as she ran out to find them; it’s where bobo worked as a waiter — at a restaurant where I’d get fortune cookies for tagging along during deliveries; it’s where shushu lived, in a house where we’d gather on Halloween each year before driving to affluent neighborhoods for trick-or-treating.

Those memories flooded into my mind on Wednesday when I learned of the unconscionable murders that occurred in Atlanta. As more information about the victims rolled in, I could not shake the feeling that they could have easily been someone I knew. I pictured the heinous acts of hate befalling the people who guided me into adulthood — those who had cut my hair, who let me feed the fish in their restaurants, and whose hand-me-downs I wore to school.

Eight lives taken — six of whom were women of Asian descent.

Those women were not just a set of nameless, faceless casualties. They were daughters and mothers, mentors and caretakers, leaders and advocates, lovers and dreamers. They had favorite dishes and small things that delighted them, songs and movies that made them laugh and cry, people they loved and people who loved them. They held onto their dreams and aspirations, celebrated their accomplishments and new beginnings, and suffered loss and pain.

But it’s naive to pretend that the U.S. has ever been a welcoming — or even accepting — place for those of Asian descent. Anti-Asian discrimination and violence are deeply interwoven into the fabric of U.S. history — from immigration legislation that excluded those of Asian descent to the Chinese Massacre of 1871 to Japanese internment during World War II to the Watsonvillle Anti-Filipino riots to the recent rise of anti-Asian hate crimes amid the pandemic. And it won’t stop here, either.

This hate and otherization isn’t new. Nor is it relegated to the annals of history or an abstract idea to be dissected in liberal arts classrooms.

Two summers ago, I was riding the bus home when a man accosted my colleague and me, shouting a series of slurs and threatening to hurt us and several fellow Asian passengers including a small child.

The situation continued to escalate, and as I looked around for support, I noticed that the driver and my fellow passengers refused to intervene — or even to make eye contact.

After a tense standoff, the man exited the vehicle.

Almost immediately, the once silent passengers began asking if we were alright and expressed their frustration with what happened.

While I was grateful for their support, I could not help but feel a sense of rage and disappointment — what good are niceties and condolences if no one would step in to prevent harassment and potential violence?

I got home, locked the door and sat down on the floor. I cried.

The deluge of articles, tweets and comments following the shooting reminded me of the frustration I felt on that summer day. Why did it take the horrific deaths of six people to draw attention to the rise of anti-Asian sentiment and violence amid Covid-19 — even though advocacy and community organizations had been trying to garner attention for months? And are brutal murders necessary to validate and legitimize the veracity of the hate and discrimination targeting those of Asian descent — or those of any ethnic group — that have spanned centuries?

These questions have bombarded my thoughts in the past week. And this past Sunday, I finally decided to call my mom — whose reservations about our place in the U.S. have always stood in stark contrast to my attachment to my Asian-American identity.

Our conversation drifted, eventually landing on the shooting in Atlanta. I told her that the senseless murders saddened me and braced for her response, expecting her to voice her concerns about the U.S.

“There are too many things in this world that will bring you sadness and pain,” she said. “I just want you to be happy.”

And it broke my heart all over again.

Bochu Ding is a senior at Middlebury and the editor-in-chief of the Middlebury Campus, where this essay originally appeared.