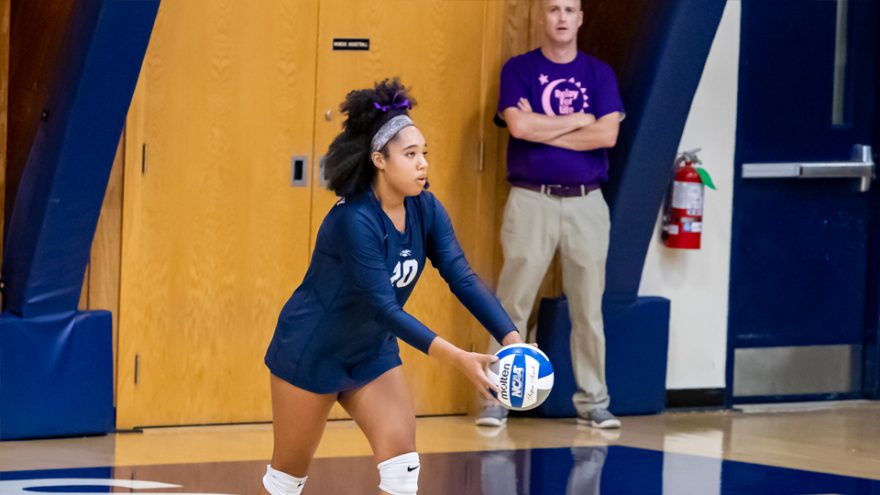 Chellsa Ferdinand graduated from Middlebury in May. She majored in political science, played volleyball for four years, was an opinion editor for the Campus, and served on the board of the Black Student Union.

Our colleagues in Athletic Communications recently caught up with Chellsa—she is now working as a corporate paralegal for Cleary Gottlieb Steen & Hamilton based out of New York City—and we’re thrilled to cross-post the Q&A here.

Can you talk about your time on the board of the Black Student Union (BSU)?

It was one of the most fulfilling experiences of my time at Middlebury.

A group of friends and I joined the BSU because we felt the organization had fallen into a state of disrepair. We found its leadership as well as its direction to be muddied; student engagement with the organization was at an all-time low. And we wanted to revamp it.

As a coalition of students with vested interests in our community, my friends and I took it upon ourselves to generate interest in the BSU once again. That meant pushing for a new round of elections to usher in a board of BSU leaders the Middlebury student community felt represented by. It also meant creating a sense of pride among Black students.

As one of the board members, I oversaw the creation of countless events, from movie screenings at the Middlebury Marquis of Black Panther, for example, to the installation of the “Night of Black Culture”––an evening dedicated to showcasing the amazingly talented Black students who make Middlebury so great. My close friend and I ended up doing a stand-up skit, integrating the tips and tricks we had acquired in our Black Comic Cultures class with Professor J Finley. Moments like these, I will cherish the most. We made the BSU an organization that students could take pride in. As I say at the outset, it was one of the most fulfilling experiences of my time at Middlebury College.

Since the Black Lives Matter movement has gained national traction, what has that been like for you? Are there things you are doing to participate in the movement?

Black lives have not historically mattered in this country. But the advent of the cell phone has proven to be a catalyst of change. With video recording, Black people now have the ability to document the general racism and apathy with which our Black lives are regarded. No more. COVID-19 has thrown the entire world into a freefall. Americans are hurting right now. Especially Black Americans at the hands of police officers. We are a nation in pain. The onset of COVID-19 has exposed the flaws of our system that many claim to just now comprehend.

The Black Lives Matter movement has gained such traction because we, as a country, are flailing. If you are lucky, you are sitting at home, perhaps even working from home, left to the distractions only offered by your smartphone. Before COVID-19, it was much easier to be complicit in racism—life in capitalist society has a way of pulling one away from activities that aren’t directly related to either economic gain or economic consumption so that we can enjoy the capital provided by our toiling. COVID-19 has completely changed the way the average American lives. We are home now; most families will have spent more time together during this quarantine than they have in past years. The horrors of systemic racism are circulating over the web, being viewed from phone to phone, and for once Americans cannot escape the grueling realities that Black people face every day in this country for having the audacity to exist.

And so, to participate in the Black Lives Matter movement, I am simply existing. It is exhausting to realize that in 2020, Americans are just now bearing witness to the racism Black Americans have experienced over the last 400 years. I have donated to various GoFundMe campaigns to support the lives and deaths of the countless number of Black Americans who fall victim to police brutality and violence. I have also signed various petitions to arrest the police officers responsible for the racist murders of Breonna Taylor, George Floyd, Sean Reed, and others. But most importantly, I have been focusing on enjoying my life. My existence is revolutionary; my success an act of God. There are so many incentives for the Black person to fail, to become yet another statistic. I refuse to let my story end there. In fact, it is just beginning.

You mentioned you were the only person of color on the volleyball team. What was that experience like?

Being one of the few people of color on a volleyball team was not a particularly uncommon experience for me. Volleyball is a historically white sport; on most of my high school volleyball teams, I was one of either two or three other athletes of color. At Middlebury, however, I was the only one. It didn’t serve to isolate me as much as it served as a reminder of my difference. It was this difference that often made me wonder just how disparate my experience on the Middlebury College’s women’s volleyball team would have been if I was situated in this world differently. If I were poor, for example, or if I hadn’t grown accustomed to operating in predominantly white spaces, perhaps my experience on the volleyball team would have been completely reimagined. But I was fortunate enough to have the necessary “tools” to fit in with my team. I had the economic capital to splurge at the Middlebury Natural Foods Co-op or purchase the latest pair of designer athletic wear, and I believe that made the difference between being viewed as “other” and being viewed as “normal.”

Although I am different from my teammates because I am Black, I often didn’t feel that way. This can be partially chalked up to me being a lighter-skinned Black person. By that, I mean to say that my adjacency to whiteness worked somewhat in my benefit. I’m not sure if I would have been viewed as favorably or even held in the same regard if I were of a darker skin color. Before my teammates met my parents (who are both light-skinned Black people themselves), I could tell there was a bit of curiosity surrounding my skin color. Was my mother white and my father Black, or was my mother the Black one and my dad the white guy? One teammate remarked that my hair appeared to be too “kinky” for me to be a mixed-race child. The colonial fixation on exoticism, on being mixed race, is strange—but I know that being this iteration of myself worked in my favor.

Nonetheless, being a part of the Middlebury women’s volleyball team was one of the most enriching experiences I had in college. I got to play the sport that I loved with women I’d come to call my friends. My team was an outlet for me; I accepted them and they accepted me. I learned a great deal about life from these ladies. I learned how to manage conflict and drama; I learned how to motivate others to bring out only the best in each other, I learned that all those hours training together, on the court and off the court, had amounted to something. In many ways, being a part of my team was a lesson in how to navigate life. I am so grateful for my teammates and the times we shared together. I don’t think I could have survived college without them.

Talk about your experience as an opinion editor for the Middlebury Campus. Do you have a favorite piece you wrote?

Working as an opinion editor for the Campus was an activity I genuinely enjoyed during my time at Middlebury. Every meeting was an opportunity to learn something new, to stay current with the political climate, to meet and work with so many driven and like-minded individuals.

In many ways, it was also a lesson in life. There, I learned that my experience at Middlebury was just one of many competing and complex lived experiences. The purpose of my position was to bring to light the very voices that made Middlebury the place that some of us had come to know and love. Oftentimes that meant looking outside of the scope of the student body; it meant collaborating with staff members and with local Middlebury residents.

Working in this role deepened my connection to the external Middlebury community. I am proud to say that members of the Campus worked tirelessly this past semester to support and cover the distress many workers felt over the yearlong workforce planning cuts. As an editorial board of equally invested community members, we felt compelled to support the local Middlebury community. We recognized, nonetheless, that our investments were not entirely equal to those who depended on the College for their livelihood. In our unique position, we thought we could serve as the platform that elevated the voices of those afraid to speak publicly.

If I had to choose one piece, I suppose it would be one of the first editorials I wrote for the Campus. That week, as a board, we decided to write about the importance of supporting small businesses––businesses not too different from the many mom-and-pop stores found in Middlebury, Vermont. At the time of the article’s publication, two stores in town had recently closed due to the competitive fierceness of e-commerce. The article was a call for the Middlebury student population to bolster the community that would become their own over the next four years. It was then that I realized that billion-dollar corporations like Amazon completely decimate local towns, pressuring them to sell the businesses that have intrinsically been a part of the local town infrastructure and replace them with the next no-name corporation. That, among many other lessons, was just one of the many things I will take away from my time at the Campus.

There are so many incentives for the Black person to fail, to become yet another statistic. I refuse to let my story end there. In fact, it is just beginning."