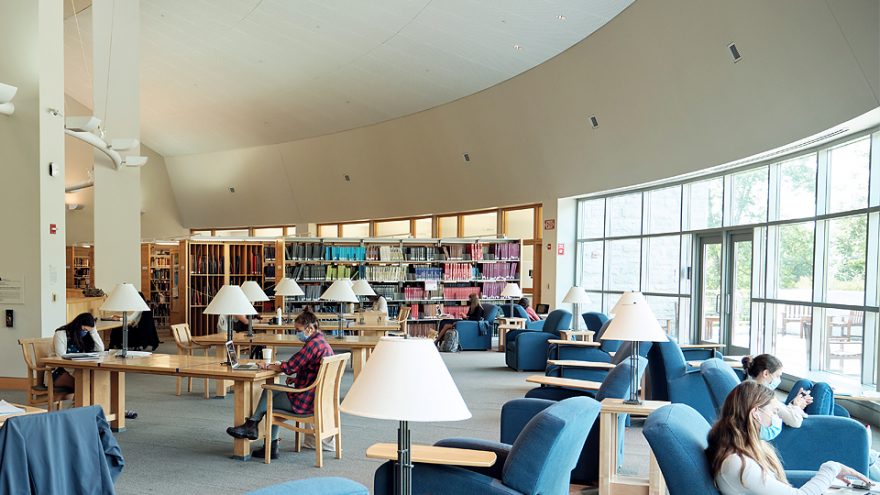 One of the year’s most anticipated moments unfolded last week all over the Middlebury campus. It wasn’t the arrival of students (though that was a big moment too), nor was it breaking from room quarantine. It was the reunion of students and professors in their first class meetings of the new academic year. Some met in person, others via Zoom. Many classes are using a hybrid of the two. For most, it was a poignant reminder of what they’ve been missing and why they value being part of a learning community.

In the first of a two-part series, we asked several faculty members to share their first impressions of the new year. Here’s what they told us.

How did your first class meetings go?

Dana Yeaton, associate professor of theatre: Overall, it was a major relief. After 10 minutes of feeling like we were in some strange futuristic film, we were suddenly just in class together, getting excited to write some plays!

Susan Watson, professor of physics: I’m amazed by the capacity of all of us—students, staff, and faculty—to take this horrific moment we’re living through and build something strong. Frankly, I’m one of the skeptics who was convinced that we wouldn’t make it through this week without an outbreak; rarely have I been so happy and grateful to be wrong.

Sarah Stroup, associate professor of political science: I think the first week of my first year seminar has gone really well.  We did flip grid introductions and a pre-semester survey, and with the advising sessions last week, we are doing the work to develop guidelines for discussion and build a learning community. The air filtration machines in Twilight 201 are incredibly loud, however, so while I have gotten an amplification system, I worry about the quieter students in my class behind masks.

Marion Wells, professor of English and American literatures: I was pleasantly surprised by the first meeting. After the long preamble through the syllabus, we focused on our first text, Virginia Woolf’s A Room of One’s Own, which has had massive influence since she first gave it as a series of lectures to women at Cambridge in 1928. We looked at a passage in which Woolf describes developing a thought in her mind as she wanders around a Cambridge college (thinly disguised as “Oxbridge”), only to be driven off the lawn by the  “beadle” (a college official), because she doesn’t belong there—i.e., she is a woman, is not a member of the college, and is not allowed on the lawn. When this happens, she loses her thought (comparing it to a little fish that breaks away and disappears). I broke students into breakout rooms on Zoom (yay, technology didn’t fail me) and then we gathered back to hear what they’d talked about, and they did a wonderful job: people mentioned gender policing–her literally being a trespasser on the lawn; her use of wit and humor to defend against a difficult experience; her tendency to minimize her own capacities or the importance of what she was thinking about (the little fish). We ran out of time but they had more to say, and there was somehow a lot of energy even though we were scattered throughout different rooms, and actually different states (I have about five remote students).

Natasha Ngaiza, assistant professor of film and media culture: My first class meetings were all synchronous. We met on Zoom and it was nice to be able to read everyone’s names and see their faces at the same time! There were a few hiccups, with a couple of people being kicked out of the Zoom session or not being able to enter—but they were resolved very quickly. We had some brief but thoughtful conversations, and my students’ responses made me feel excited to be back in a classroom, albeit a virtual one, with Middlebury students. I am teaching a video production class and it’s normally a very hands-on, highly collaborative class. Not having those initial introductions to the equipment in the first class was sad. It did feel like a loss.

What’s your sense of how students are feeling to be back in class?

Susan Watson: I have completely restructured my courses in order to meet the moment, and students seem willing to adapt. Lectures for an upper-level elective have been pre-recorded and posted online, with class time devoted to discussion via Zoom, where no one can hide. This has required some students to move out of their comfort zones, which they may not even recognize as a blessing in disguise. They’re good-natured and adept at looking out for each other, making it easier for me to guide them.

Dana Yeaton: The students seemed so grateful to be back, and together. As they walked out, I’m pretty sure every one of them said, “Thank you.”

Natasha Ngaiza: Students seem excited to be back in class. They were eager to participate and seem as studious as usual.

Sarah Stroup: As much as there are substantial differences to our campus community this semester, my feeling is that folks are really grateful to be back in the classroom.

Are you trying anything new this semester that you might not have done otherwise in “normal” times?

Natasha Ngaiza: I’m having both my production and studies classes post pictures of themselves and their surroundings in an effort to have them think more visually and to foster a sense of human connection.

Sarah Stroup: I am excited that I’ve basically been forced to flip my classroom in my political science class, so students will be able to hear me talk about the readings before they do them, and I hope that will enhance discussion. Because so many of our materials are digital, not paper, I am working to train my brain to read carefully on screen, despite my preference for printed paper.

Susan Watson: How about teaching an advanced experimental techniques course with some students remote and some in person? We have spent the summer restructuring the course so that students work in teams, with webcams live-streaming the experimental setup, one student in the room, and partners conferring on each important decision via Zoom. Labs take longer when equipment isn’t right in front of you and everyone needs to be brought up to speed, but by the end of week one I am truly impressed by our students’ ability to fully engage with each other and to grapple with new material. This could have been a disaster; they’re making it work.

Marion Wells: Because I’m creating the siphoned off lectures I am doing some quite different things; I’m trying to use multimedia tools—images of paintings by Woolf’s sister Vanessa, for example, or recordings of Toni Morrison when we get to her work, and recordings of Nina Simone to accompany our reading of Morrison’s novel Sula.