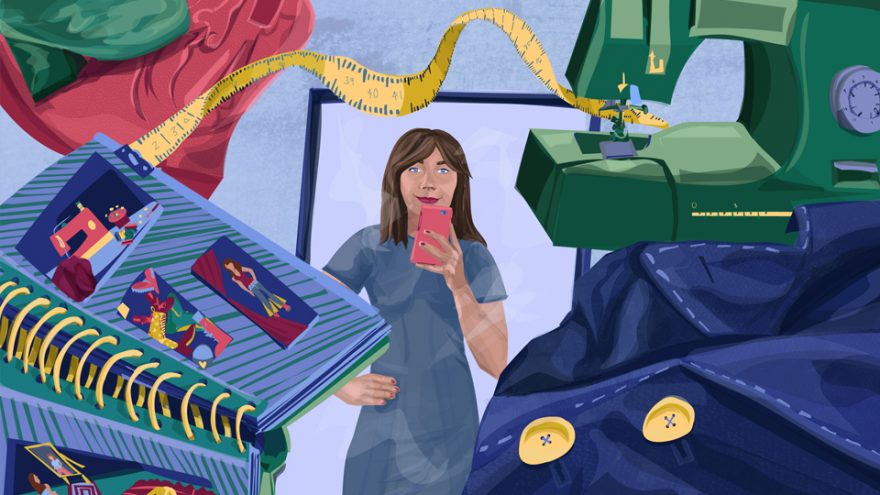 Four years ago, on the day my husband and I filed for divorce, dueling lawnmowers flung the scent of cut grass up and down the block; my neighbors were preparing happily for the prize of autumn as the structure of the school year pulled in.

But for me, everything was in flux. The thick spire of my married, together life had finally uncoiled into loops and compromises. With these threads, my husband and I would begin stitching together the next, crisp phase of our separate lives.

I stood naked in the bedroom that now belonged to me alone. I poked through my closet, a lineup of tattered remains, each one a bodiless wretch—limp and dangling from a wire hanger as if its soul had slipped out in the night. To the left, my husband had once arranged his things like hardware, by function, size, and color.

Along my clothing rack, each familiar piece was a scrap of my identity: the linen halter top I’d worn to our first housewarming barbecue; the lightweight cardigan I had treasured during my three pregnancies, its long flanks unfurled to the floor like eagle wings.

Everything I owned had been acquired during a phase of my life that was now over. With the years ahead looking hazy, I sank into thick, withering despair: What would I wear now?

Lately, I’ve been asking myself the same thing, and often. But I’ve been here before.

I had always used clothing to project whatever I wanted to be, whether or not I had completed the deeper work required to actually get there. My clothes were a hopeful thing—a fast track to the selfhood I envisioned for the future. But after ending my marriage, I faced a deep sense of loss. It wasn’t the partnership so much as it was the flickering image of me. Who was I now?

In 1987, when I was 10 years old, I fashioned a peplum top using my mother’s sewing scraps. My hand-stitched prototype would never see the light of day; instead, I wore it at home, glancing at myself as I passed by the mirror, strutting from one end of my bedroom to the other, belting out the words to Joe Cocker’s “Delta Lady.” Back then, I expected that I would develop into a woman who wore whatever she wanted, whenever.

When my older brothers left for college, I raided their discard piles for varsity sweatshirts and grungy button-downs. Even as I prepared to leave home for Middlebury, I continued scrounging around for things that had been worked and worn before. I took a crumpled, moth-eaten sweater from my father’s closet and slipped it over my head like a cocoon. I squeezed into my mother’s old cowboy boots, though they were a full size too small. I buttoned her navy, double-breasted, 1970s-era peacoat around my ribcage. Once, I wrapped a gauze curtain panel around my torso, tied it into a stiff knot beneath my shoulder blades, and sauntered off to an Ani DiFranco show. I scored a buckskin jacket with the fringe sliced off from the Salvation Army. I took a pair of used Levi’s, split the seams open, and added triangles of mango-colored calico—custom bell bottoms.

Four years later, when my grandparents gave me a sewing machine for graduation, I wasn’t sure whether to be grateful they knew me well or spitting mad that the gift was some obscene expectation for a future of domesticity.

If the wardrobe of my youth was free-spirited and a little lost, that’s because I was those things, too.

But as a 39-year-old mother of three who had ended her marriage with no further plans, I worried that nothing had changed. At that stage in life, winging it wasn’t fun—it was terrifying. Wasn’t I supposed to have everything figured out already?

As I pieced myself back together, I thought often of the younger, more hopeful me.

During my second year at Middlebury, before many of us scattered abroad, I visited a thrift store near Burlington with Emily Voorhees ’99, a close friend from Hepburn, our first-year dorm. The dressing rooms were cordoned off by purple velvet drapes tied back with gold roping—I imagined these had been salvaged from Janice Joplin’s backstage lounge.

I tried on a sweater, vintage corduroys, and probably a pair of white go-go boots.

“What do you think?” I asked Emily. “Does this make me look confident? Or a little strung out?”

She looked at me with her signature smile, a veneer for deep wisdom I so admired.

“Well, Simi,” she asked, using my family nickname, “do you like it?”

I wasn’t sure. I was desperate for whatever I wore to convey all that I wanted to be, not just how I felt in one bony slip of time.

Decades later, when I became a divorced, single mother, Emily’s wisdom was still on my mind. With it, I descended into a period of habitual shedding, discarding clothing that no longer seemed applicable. So much of what I owned reflected a person who had kept herself small.

But I wasn’t small. I had lived abroad several times over, learned four languages, advocated for survivors of domestic violence, and become a mother. All the while, I had thought of myself in limited terms. I want to be a writer. I am, effectively, a housewife. I had been devoted to others—understanding who they were and what they needed. But I was no help to the world if I perceived myself as some wispy, insignificant part of it.

When I began assembling a new wardrobe, I converted Emily’s question into edict. Well, Simi, do you like it? If the answer was yes, then whatever it was became mine. Gradually, my things began to reflect the person I had always wanted to see. Take my new, beloved collection of boots, for example. Each pair granted me the gospel of power, the agency to become whole, advancing my new American dream, over which I alone was sovereign.

It turns out that we cannot take on that hopeful mantle of our future selves unless we first determine who we are right now.

Months after my divorce was final, I texted Emily from another dressing room.

I was trying on a gray, fitted sheath made from swaths of cotton that stretched around my hips like a cyclone.

“I love this!” I wrote, snapping a picture of myself and sending it to her.

“Buy that dress immediately,” she replied, and so I did.

In the transition from early to evolved self, there lies a span of emptiness, a grieving period of sorts. But heartache and joy can be woven from the same strand—the craft of being human is ever complicated.

Now, at home, when I wonder if I should bother with anything other than loungewear, I stop. I no longer allow myself to shrink, regardless of circumstance. The question I ask then is not “What do I wear?” but “Who am I, really?” In some sense, I’m relieved that the world and everyone in it is sequestered away with space in heart and mind to contemplate the pace of true progress. I may be alone much of the time right now, but I feel less so knowing that we are all preparing ourselves to march across this bridge and into subsequent rhythm, whenever that may be.