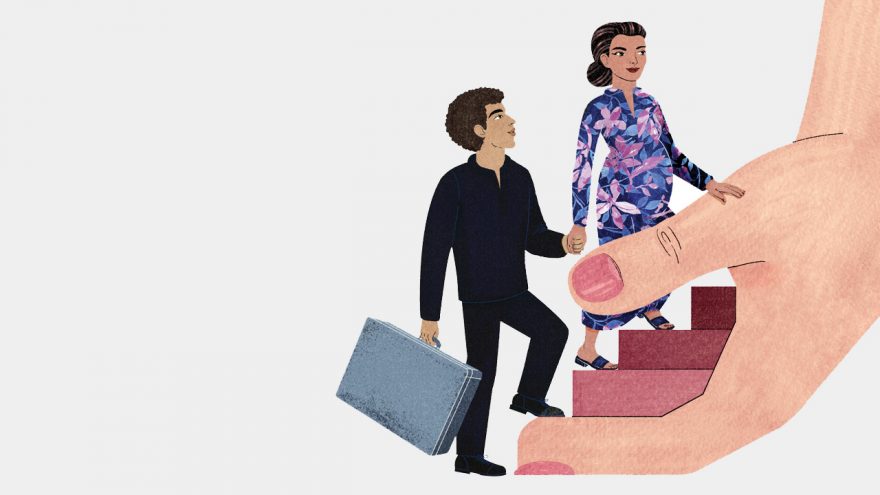 I was in the second week of my German class in Dresden. Hasan and I presented a skit. I played a hotel receptionist. Hasan played my customer, disgruntled because his Internet service wasn’t working. Translated from German to English, the skit ended like this:

Hasan: “So, are you going to fix the service?”

Me: “Nope. I’m only the receptionist.”

“Well, who can do something about it?”

Phoning my manager. “We have a man who is very angry about our Internet service. He wants a refund. Yes, we should give him one. I’m afraid of this customer. He is angry, and bigger than I am.” Stage whisper. “Besides, I think he’s a Syrian!”

This last line was an ad lib, and, like all ethnic humor, not without risk. But my classmates roared with laughter. I got away with my bad joke because my classmates were Syrian refugees.

They had arrived in 2015 and were among the 5,500 refugees living in Dresden.

I had taken my last German class at Middlebury in 1974. By graduation, my skill had reached the same level as my downhill skiing: sloppy intermediate. I now had the opportunity to complete the unfinished business of learning German to the point of conversational fluency. My classmates had a more pressing reason for learning the language. Their university educations had been interrupted by civil war. To continue their studies, they needed to be proficient in German.

No country has been more welcoming to Syrian refugees than Germany, which has provided them with language education, apartments, and living expenses. But Dresden, the center of Germany’s anti-Islamic and neo-Nazi movements, is its least welcoming city. During my stay, a mosque was firebombed, four refugees were attacked by thugs, and two Syrians were attacked by a man wielding a sword. Weekly anti-immigrant demonstrations attracted thousands of protesters.

The American presidential election was around the corner. My classmates’ interest was purely academic. To them, America became irrelevant in 2011, when the U.S. refused military aid to the rebels even after the Syrian government had crossed the “red line” of using chemical weapons. Moutez, a doctoral candidate in international business, theorized that the Americans’ decision to stay on the sidelines was part of a deliberate strategy to tilt the Middle East balance of power away from Saudi Arabia toward Iran. I told Moutez that he was giving our government too much credit for actually thinking things through.

Hasan, my dialogue partner, was expecting his first child, a son. He once asked if I had experienced racism as a child. Sure, I said. In my small Wisconsin hometown, I was frequently teased about being Japanese. But, I said, it was no big deal. Every kid gets picked on at some point. Hasan responded: “The other day, I saw some German kids on the playground call a black child a ‘neger.’ If my child plays with other children and learns such words from them, I would want to make sure he doesn’t use them against another child.”

My answer had missed his point. Hasan was less afraid of his child being picked on than he was of him picking on someone else.

On my last night in Dresden, Hasan and his wife had me over for tea. Hasan told me that he was glad that I had gotten to know the Syrians. “You could have stayed at your apartment and not gotten to know us,” he said, “but this way, you know that we are normal people. We’re not terrorists or criminals.”