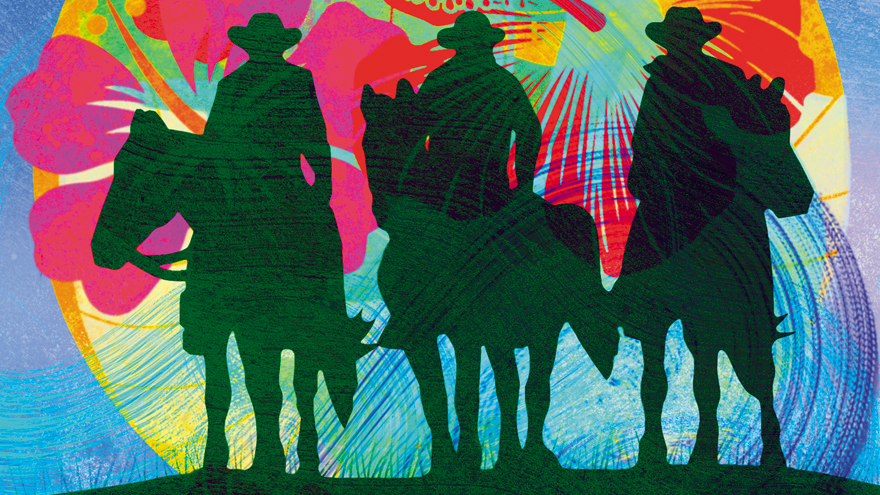 There may be no more iconic and cliched American figure than the Western cowboy. Portrayed in the novels of Larry McMurtry and  formulated by marketers into the Marlboro Man, the image of the angular, gun-toting loner guiding his adored horse across the High Plains is an enduring symbol of a place and culture.

For anyone steeped in that indelible imagery, David Wolman ’96 and Julian Smith’s Aloha Rodeo is as revelatory as it is satisfying.

The book’s propelling narrative centers on the story of three Hawaiian cowboys—or paniolo, as they are known in Hawaiian—who journeyed by sea and rail to Cheyenne, Wyoming, in 1908 and stunned the chauvinist throng at the famed Cheyenne Frontier Days celebration by finishing first, third, and sixth in the rodeo’s steer-roping competition.

But the story of those strangers in a strange land mainly serves as a jumping-off point for the book’s greatest strength: its fascinating digressions into 18th- and 19th-century Hawaiian history, the emergence of the rodeo as a quintessential Western spectacle, Cheyenne’s invention and embrace of Frontier Days as a salve to its boom-and-bust economy, and, most engrossing, the story of how Hawaii came to develop a ranching and cowboy culture uniquely its own.

That tale begins in 1793 when English Royal Navy captain George Vancouver presented Hawaiian King Kamehameha with five black longhorn cattle as an offering intended to entice the island kingdom to open itself to outside trade. It worked, and a year later Vancouver returned with three more bulls and two cows. Kamehameha took Vancouver’s advice and banned killing the animals until the herd could be established.

Thus protected, the cattle reproduced freely and, within a decade, thousands of them could be found, running more or less as feral beasts, on every island. In 1830, Kamehameha III asked contacts in the Mexican territory of California to recruit some local cowboys who might travel to Hawaii to teach islanders how to rope and herd the still-growing numbers of cattle, which were becoming a dangerous nuisance as they roamed at will, destroying gardens and crops and occasionally terrorizing the citizenry.

At this same time, a small number of American and European newcomers to the islands were trying to establish footholds of their own. Most notable among the white settlers was John Palmer Parker, an adventurous and ambitious New Englander who arrived in 1815 at the age of 25. Parker developed a skill for trapping and killing the feral cattle, but his real talent was acquiring land and money. By the end of the century, Parker Ranch would encompass 300,000 acres and 25,000 head of cattle. The three paniolo who triumphed in Cheyenne were not only cousins but also Parker Ranch cowboys. Aloha Rodeo is a fitting tribute to their legend.