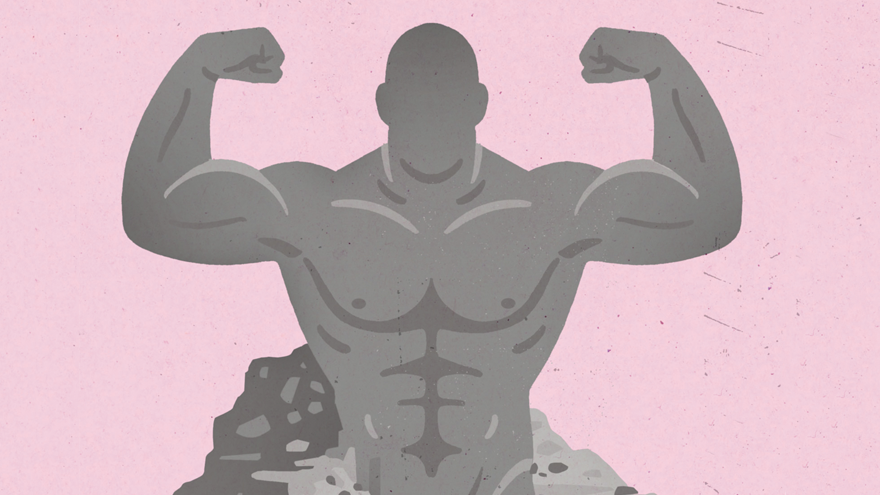 Competitive bodybuilding is a strange and exacting sport. Participants adhere to a punishing diet and exercise regime, submit to the relentless spray of a tanning gun, and parade before a scrutinizing audience while wearing tiny briefs and flexing with almost comical exaggeration. It requires not just fitness and definition but also supreme confidence, comfort, and pride in one’s own body. For the contestants in Man Made, an affecting documentary by writer and filmmaker T Cooper ’94 about the world’s only all-transgender bodybuilding competition, that makes just showing up a triumph.

The film closely follows four contestants as they prepare for Trans FitCon 2016, a competition open to any bodybuilder who identifies as a trans man. While the contest itself provides the film’s natural narrative arc and mildly suspenseful climax, it also serves as a vehicle for Cooper’s deeper exploration of trans identity and experience of belonging.

The main subjects are in different stages of transitioning. As the film opens, Dominic Chiko, a 26-year-old Minnesotan who placed third in the previous year’s competition, is preparing for “top” surgery—a double mastectomy with nipple grafts. Glimpsing his flat chest for the first time, he becomes weepy and emotional: “Oh my God, it looks so good! That’s me?” he says. (Cooper, who is also trans, briefly turns the camera on himself to capture his own unexpectedly tearful reaction.) Kennie Story, 34, the assistant director of fitness at the University of Central Arkansas in Conway, inaugurates his transition with an “It’s a boy!” tea party, administering his first testosterone shot while friends and family scarf blue cupcakes and Jell-O shots. The most serious bodybuilder of the lot, Mason Caminiti, 40, maintains 4 percent body fat and has successfully competed in mainstream contests against cis men who have no idea he is trans; at the end of the film, we learn he has since undergone “bottom” surgery.

Man Made doesn’t let viewers forget the disproportionate dangers trans people face. Several subjects discuss their alienation, depression, and suicide attempts. Yet in the end, courage and compassion prevail. Before they go on stage for the final competition, contestants shave each other’s body hair and peruse a table of “packages”—prosthetic penises to fill out their briefs—joking about the risks of choosing one too big. United by tenacity and grace, they’ve already defeated the protesters outside chanting inanely, “If you’re a Y, you’re a guy.” Beyond that, it doesn’t really matter who wins.

Man Made can be seen on YouTube and Google Play, or can be streamed at manmadedoc.com.