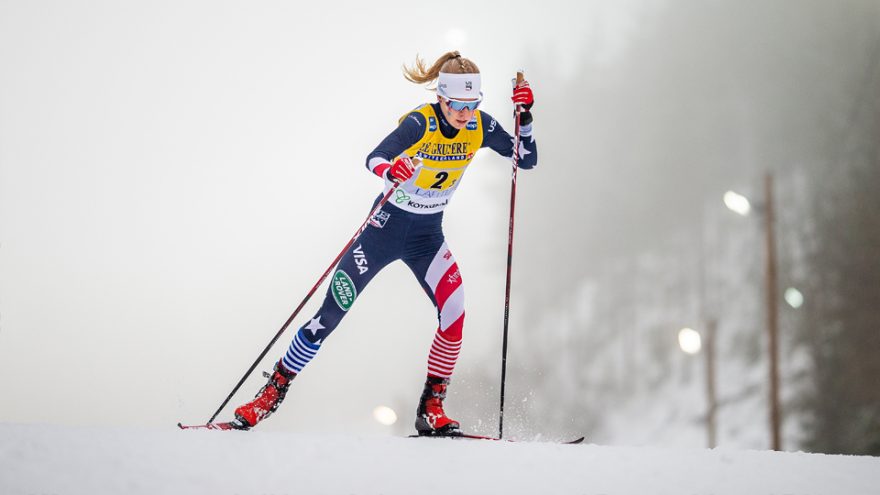 A month or so ago, as the calendar flipped to 2021 and most of us began to settle back into our work or school routines, Middlebury sophomore Sophia Laukli left the U.S. for Norway, a country where she holds dual citizenship.

A Nordic ski racer, Sophia achieved All-American status as a first-year at Middlebury, finishing second in the 5k freestyle race at the 2020 NCAA Championships last March—she got the race in under the wire, as the four-day championship event was ended after just two days of competition due to the emerging pandemic.

Sophia’s performances at Midd and in junior world championship competitions—she was part of a relay team that won silver in the 2020 Junior World Ski Championships—impressed national team coaches, and last fall she was named to the 2020–21 Davis U.S. Cross Country Ski Team.

Sophia was one of 11 athletes named to the Development Team, skiers who would compete alongside Olympians this season. Pretty heady stuff, but not as heady as what would come next.

In the second World Cup event of the calendar year, Sophia was selected to make her WC debut in races in Lahti, Finland. We caught up with her after the races that weekend and talked about the experience, what it’s like to compete at the highest level of her sport, and how she plans on juggling remote learning and international ski competitions in the coming weeks and months.

Sophia, congrats on your World Cup debut. You had a crazy 24 hours—not only did you make your debut in the 15k skiathlon, but you followed that up the next day by competing on the 4 x 5k relay. As best you can, describe what this 24-hour period felt like.

It was definitely an overwhelming but exciting 24 hours. It took me a while to fully wrap my mind around it all, and not until I was on the start line for the 15k did it really sink in that I was actually racing a World Cup. I can’t really remember a race that I had been this nervous for, but there was a lot of excitement at the same time. I knew there weren’t any big expectations from the coaches or other U.S. members, but I still wanted to race well and show that I had earned that spot.

And yes, it was quite the combo to have a 15k mass start and then a relay be my first World Cup races. Carnival mass starts in the U.S. are not quite as terrifying or intense as they are over here in Europe, so I was caught a bit off guard at the start of the 15k. I eventually settled in, but it was certainly a race environment that I had never experienced before. I had done a few races in Norway the weeks before Lahti, which I now realize were good preparation for the intense race setting. And while racing that skiathlon was rather intimidating at first (as expected), I ended up having a lot of fun with it and was really happy with how it went.

I read an account of the 15k race, and I understand there was a big pileup just two minutes into the race, which you narrowly avoided. Can you describe this moment for me?

I can get overwhelmed in mass starts and don’t always have the fastest or most effective starts, but that actually worked to my advantage in this race. I was just far enough back that by the time I made it to the crash, I was able to sneak my way through the last remnants of the pileup. It was on a downhill so I gained some momentum, but also got a confidence boost that helped send me up the next hill. I felt a lot more energy and adrenaline after avoiding that crash, so it gave me a sort of mental momentum that pushed me through the rest of the race. It’s a bummer the crash happened since it ruined the races for a lot of the skiers, but you got to take what you can get when it comes to racing.

Then you came back the next day for the relay . . .

Yes, and having that first race under the belt, the relay was slightly less daunting. I tried not to put too much pressure on myself, but knowing the past successes of the U.S. women made that a little challenging. My teammates made sure I didn’t feel any huge expectations, though, which was helpful to hear, and these women obviously know what they’re talking about so I did not object to any advice given.

My knowledge of U.S. ski racing is limited, but the name of one of those women you mentioned jumped out at me when I read about the account of the relay race: Olympic gold medalist Jessie Diggins. She was the second leg on the team; you were the third. I don’t even have a proper question—just would love to know your thoughts about this.

I tried not to think about it too much, but it was pretty surreal to not only be on the relay team with Jessie but to also be tagged off by her. I had met her a few times before coming to Lahti so I knew she was really friendly and outgoing. For me, it was just really cool to see her in race mode and see how much she loves skiing and racing. She clearly takes skiing and racing very seriously, but she approaches it in a way that isn’t overly intense (at least from my perspective). I really appreciate seeing that balance, and it also makes it pretty hard to stay too intimidated by her. So, racing the relay with a gold medalist could have been terrifying, but was instead a really cool experience that also gave me a new outlook on racing. I don’t think I realized how much I would learn from coming to a World Cup, and not just from Jessie; seeing how all the women on the team go about racing is incredibly valuable.

How have you managed to be both a full-time student, albeit remotely, while still training and competing at the highest level in your sport?

So far, I have only had to take a J-term class, which has been manageable with training and racing. I would say it’s actually really helpful for me to have other things to focus on during the season so I’m not constantly consumed by skiing. However, when I start the actual spring semester in a few weeks with a full class load, it might take some adjustment. As long as I get into a rhythm and figure out a schedule that balances training and school, I’m hopeful I’ll be able to manage. When it actually comes to race day though, it’s a little challenging to think about school or writing a paper, so I might have to temporarily put work aside to get race focused. On the other hand, maybe having a really good or really bad race will cause a serious motivation to go do a problem set or write a couple of paragraphs; that would be nice. Either way, it is definitely a silver lining that I’m able to continue classes and travel so much for racing with school being remote.

What do the next couple of months look like for you?

After the races in Lahti, I competed in the Falun World Cup. I’m now heading to Vuokatti, Finland, for the U23 World Championships, which happen in mid-February. After that, I have another start in the Nove Mesto World Cup at the end of the month. The next races really depend on my results so it’s a bit of a waiting game on what the season will look like after that. There’s a good chance I would go back to Norway for a few weeks and then head back to the U.S. sometime in March. Then hopefully a beach vacation (with school of course) for April!