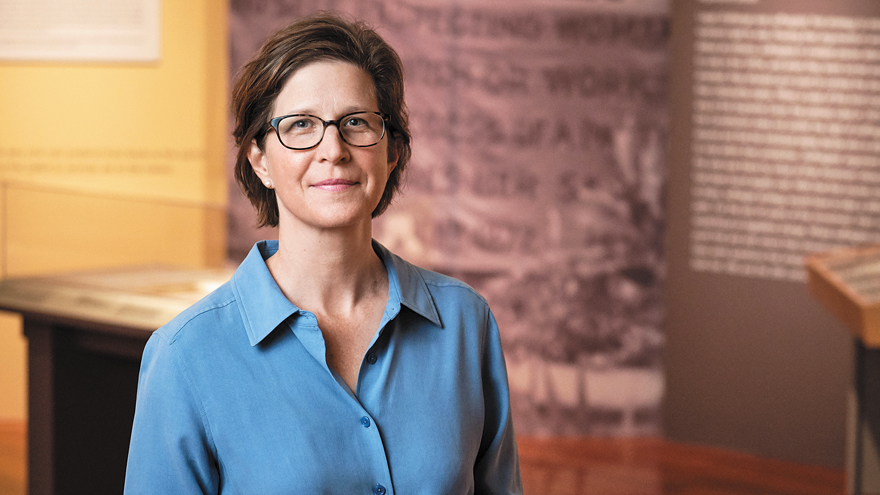 A few years ago, Richard Saunders, the director of Middlebury’s Museum of Art, approached history professor Amy Morsman with an idea: Would she be interested in collaborating with the museum to commemorate the centennial of the passage of the 19th Amendment, which guaranteed women the constitutional right to vote? She said yes. The magazine recently spoke with Morsman about how this germ of an idea resulted in the museum’s current exhibit, Votes . . . for Women?

Starting with the obvious, I’m assuming that curating an art exhibit was a new experience for you.

Well, it’s not an art exhibit, it’s a history exhibit, it’s a commemoration of an event. And that’s a departure for the museum, but it’s something that Richard and I agreed upon from the start: this would be different.

There’s far more text than you would find in an art exhibit. There’s intro text, framing text, contextual text. Of course, Richard and Ken Pohlman (the exhibit designer) were always reminding me that we needed visuals—images and material culture pieces—that would bring it to life. And they were reminding me that I need to be concise with my text. [Laughs]

I understand your first-year seminar last fall was instrumental in this concept.

That was Richard’s idea from the beginning—making a curricular connection to the commemoration and using that course to inform the exhibit. I would never have done any of this without him.

So it was a leap of faith?

Absolutely. I signed on the dotted line and had no idea [laughs] what I was getting myself into, having never done exhibit work before.

So you were learning with your students.

Yes! I said that to them at the very beginning: I don’t know any more about this than you do. I knew the history, of course, but I was learning right along with them about things like the logic of exhibit design.

Is there one thing that surprised you more than anything else?

As a person who usually can express myself and deliver my arguments or probing questions orally in front of students, I am [laughs] surprised by the lack of control I have over how people consume an exhibit.

You can’t tell people how to experience it.

Right! In an article, I can control where I put my thesis statement and my topic sentences, and I can control what I ask students in class and what readings I curate, but I can’t control if somebody comes to the exhibit and, say, goes right to the end. Or skips one section; even if I know it makes more sense to first read about the idea of woman suffrage before you consider the legacy of the 19th
Amendment.

I mean, I believe you have to start with arguments for woman suffrage first, and then move on along thematically, to see how the movement builds up over time. But I had to become comfortable with letting go and understanding that I couldn’t control how people take this in.

Is this something you’d want to do again?

It’s funny you ask that, though this probably isn’t the answer you’d expect. One day in August, I was driving to work, and the exhibit was on my mind, and it dawned on me—it’s going away in December. And then we’re never going to have it again.

So as a class we’ve been discussing what we can explore in greater depth, now that we’re not constrained by the space and time of a physical exhibit. I’ve never asked this of a group of students—it’s a digitally oriented research and curricular project.

And another leap of faith.

Exactly. You know, it could be a failure, but we have to try. Just think about what that would mean—the walls of the exhibit come down, yet the scholarship lives on.