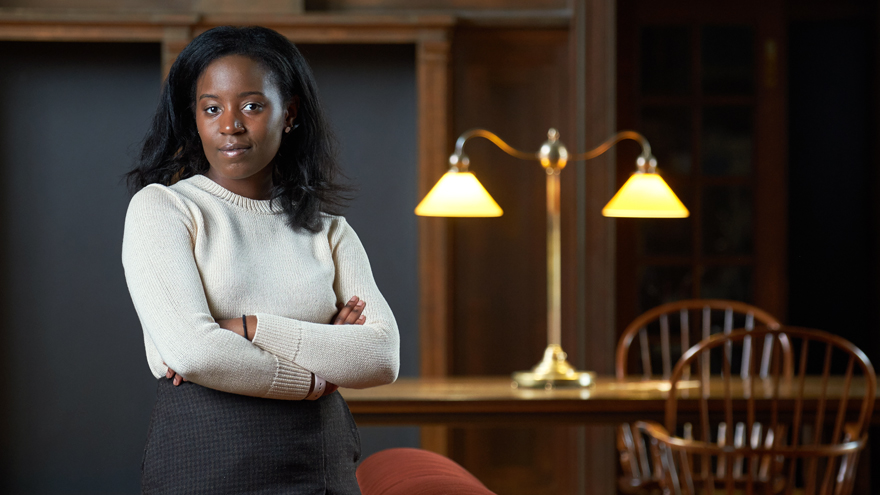 It’s not uncommon to find senior Nia Robinson in the student-run café, Crossroads, where she works as a manager. Nor is it uncommon to find her in Emma Willard House, seeing as she’s an admissions fellow. You might also find the sociology major asking penetrating questions at an afternoon lecture. And then there’s the matter of her being the first Black woman to serve as president of the Student Government Association (SGA). It’s not uncommon to encounter Nia in any one of these roles or scenarios; what boggles the mind is that one person can be so many things for so many different people.

Let’s start with the historic nature of your election as SGA president. Did this come with a burden?

At first I thought it might; I thought some might “Alexander Twilight” me. I was happy that didn’t happen.

What do you mean by that?

That I would be known as a fact instead of for any ideas I had or work I did. But as the year has passed, I’ve become a bit more reflective, and I do think electing a woman of color to this position is important. Personally, though, I don’t want to be the first of anything anymore.

Was there anything about the job that surprised you?

Were they tears of frustration? Sorrow?

Mainly it was frustration; I don’t think there was ever a point when I was really sad.

That we couldn’t talk to one another. Our early meetings felt more like British Parliament. But that started to change around January, and if there is one thing I’m most happy about, it is how we have come to relate to one another now. We’re all college students, and now we’re speaking to each other as peers instead of as combatants. I’m proud of how we’ve grown, and lately I’ve left meetings thinking, This is why I’m doing this.

What advice would you give to the next president?
Remember why you are there—to help and represent students. And as a leader, learn to delegate. You can’t do everything yourself.

And what’s your biggest takeaway?

I’ve realized that what excites me the most is making connections—getting to know people, learning what others care about, and then connecting people who have common interests.

When you come back to Middlebury in 2029 for your 10th Reunion, what do you want to see?
I want to see Middlebury become an institution that puts fire behind its beliefs. Because right now, I feel that we talk a lot, but where’s the action? And I’m talking everyone: students, faculty, administrators. Maybe it’s just higher education, but we seem to want to talk things to death.

So you want Middlebury to find a stronger, clearer voice.

Yes. I would like to see everyone’s communication skills improve. We’re taking baby steps in that direction. I want to see strides.

Can I ask you a question?

Are you going to mention the various jobs and roles I’ve had?

Yeah, I assume so.

I’d like to speak to that, if I could.

I was talking to my Commons dean, Jonathan Miller-Lane, the other day, and we were discussing the culture of “doing” at Middlebury, how everyone is busy doing things and how we base our relationships off of the things that we do. Well, what happens when you take those things away? Do people still want to talk to me if I’m not SGA president? Or an admissions fellow? And does that mean someone might not be interested in another student of color who doesn’t hold these positions? If I could do Middlebury all over again, I wouldn’t do as much. I’d like to see if people wanted to know me for me.