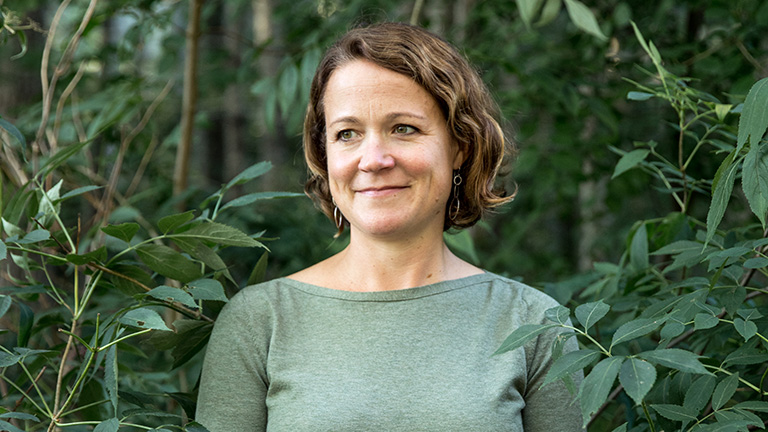 On her first trip to Africa, in 2010, Cori Messinger ’98 could not believe how close she could get to an elephant. She felt awe and wonder at the landscape, which seemed to vibrate with life and color. She met remarkable leaders of nonprofits, who were working with local communities. She felt alive, at home. She turned to her traveling companions, leadership staff with the Nature Conservancy in Africa, and asked, “Hey, do you need some help with fundraising?”

Messinger was already working with the Maine chapter of the Nature Conservancy (TNC). But she was excited about making a change and TNC agreed to put her to work raising money for the continent where they had recently established a presence. As the director of philanthropy for the Nature Conservancy in Africa, she thinks of herself as a matchmaker, working to pair people with causes in African countries they want to support. “Philanthropists are looking for ways to accomplish their own personal dreams. They have certain values, or places, or themes they care about. For example, if you want to make sure that elephants don’t perish in the wild as they exist today, you might want to invest in a conservation group like TNC.”

Messinger visits Africa four or five times a year to observe, and engage in, the work TNC is undertaking. She can describe exactly how TNC helped fishermen around Lake Tanganyika to implement better fishing practices and create standing nets to dry fish so they can earn more money per quota of fish. Or talk about how TNC mapped freshwater systems in Gabon so a country that needs energy development can figure out how to create hydropower dams without disrupting river habitats.

She brings supporters on her trips to see, firsthand, the important effect of their gifts, or to expose potential donors to TNC’s impact in Africa. Often these trips will be to northern Kenya, where TNC has been working the longest. Messinger enjoys being a part of people’s experiences on a first trip to this area where humanity originated. “They’ll say there’s something about it that feels familiar—something about the air, the temperature, the old red dirt.” She has witnessed some amazing scenes with donors. At one point, she was at a private ranch in northern Kenya that TNC helped to protect, with a supporter from Maine and a leader from Nairobi. As they were on a game drive through the preserve they began to notice groups of elephants hovering in the area. They came around a corner and saw a large group that was particularly agitated and energetic. “A couple of them were bouncing and trumpeting, raising their trunks. Just then, one large elephant backed away a few yards from the group and a large volume of liquid came out of her and then a small, black mass. She had just given birth and we had witnessed it! The baby rose to its feet and all the other elephants immediately circled around. Our guide said they were all coming to pay their respects and they knew the birth was going to happen. We just sat there in tears.”

Moments like these only enhance Messinger’s appreciation of her job. She never set out to be a fundraiser but she did know, even from her Middlebury days, that she wanted to work for a conservation organization. She was an environmental studies major in college and, after graduation, started looking into job opportunities. In her home state of Maine, TNC was advertising for a fundraising assistant. “I didn’t know anything about fundraising but it was a really good fit for me. You have to know a little bit about a lot of things, cover a lot of territory, and be able to engage people in the work.” 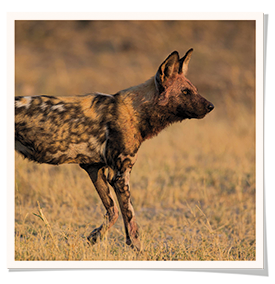 The African wild dog is one of Messinger’s favorite animals. “Their social structure is really interesting. There’s typically an alpha male and an alpha female and they den together in large packs with an altruistic social structure. They are really strong hunters and are nomadic. Wild dogs are elusive, mainly because they are unfortunately endangered.” 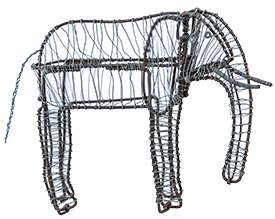 Messinger has collected many meaningful artifacts in Africa. “In Zambia, snare lines are often set out to capture wildlife and can lead to the devastation of populations of elephants and other species,” she says. “Local people collect the snare wires from the wild and create artistic souvenirs from them like this elephant, with proceeds going to conservation NGOs that are working to end wildlife poaching.”