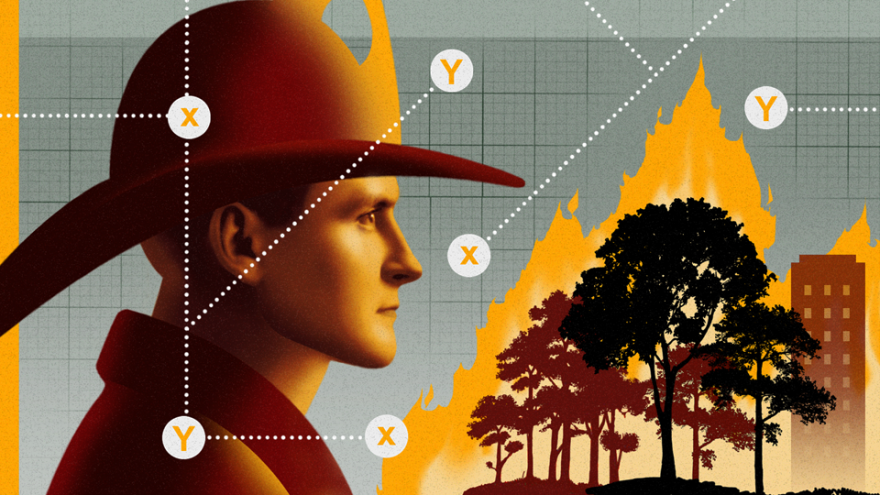 More than two decades of fighting fires on the West Coast have not lessened the jolt Andy Bozzo ’94 feels when his cell phone rings. The Contra Costa County fire captain knows that every second counts as he responds to the latest emergency.

“I don’t want to downplay the mental aspect of this profession,” Bozzo says. “But there is a very real physical reaction in regard to anxiety and stress hormones.”

Working in Antioch, a city of about 125,000 people in Northern California, Bozzo has learned how to pace his emotions based on the calls that come in, which include medical emergencies and rescues as well as fire calls. But knowing that lives could be on the line is enough to cause palpitations. And there is always the unexpected upon arriving on the scene, especially when it’s a structure fire. The dangers are real, but the allure of firefighting began early for Bozzo, and while it took some time to get to this point, the appeal of the profession was a part of his life.

When he was five years old, while living on the back side of the Santa Cruz mountains, Bozzo witnessed the mountains around his home in out-of-control flames. He watched all day as crews fought the blaze. “I remember being fascinated by all the equipment that was being used to fight this fire.”

Bozzo never forgot that moment but it wasn’t until his senior year at Middlebury that he circled back to his fascination with wildfires. He was in the class Plant Ecology with Visiting Assistant Professor Kristina Jones, and they were learning how during low-intensity fires, cones open up to release seeds that enrich the soils in forests. They began discussing fire succession and he discovered that fire science and fire ecology were real topics. He thought, “Can I write about this? I think I want to write about this!” The professor encouraged him to pursue his thesis on the topic. “I didn’t know at the time I was going to become a firefighter, but it was a great suggestion by my professor.”

Bozzo pursued his love of sciences after graduation, teaching at the middle school in Monterey, California, and enrolling at San Jose State University in 1998 to begin a master’s in environmental science. That summer he took a seasonal job with CAL Fire in Monterey County, partly to help pay for school but also because he really wanted to do it. He fell in love with the job and began working toward becoming a full-time firefighter.

While Bozzo works in a rural community, firefighters are one big team that are often asked to leave their comfort zones to help fight fires out of their region. That became a monthly expectation during last year’s summer months in California. The two days on, four days off no longer applied for firefighters. At one point, Bozzo remained on a shift for deployment for 14 straight days.

“It’s not forced, we’re eager to go,” Bozzo said. “When a region needs help, word gets out. I was in Napa for seven days at the LNU Complex fire. We’re in a new era of firefighting because of climate change. To witness this kind of fire behavior is huge. We’ve been off the charts. It’s become a lot more unpredictable.”

Such as the time frame in which a fire can surge out of control, especially with the type of materials that are currently being used as furniture in homes. Bozzo estimates that a structure fire will double in size in 30 seconds.

“The tone of the voice in a dispatcher can often tell you it’s more of a dire threat. Your life’s on the line. It can be a very scary experience. I’ve experienced that a few times where it got dicey. That’s where teamwork really comes into play.”

Bozzo likens that teamwork to what he experienced playing sports at Middlebury. In particular, he recalls walking onto and making the lacrosse team as a fifth-year senior with no experience. “It was an incredible time. Replicating the teamwork on that lacrosse team is a huge order. But these fire moments come really close.”

“Having each other is a critical element to the job,” Bozzo said. “That camaraderie between your crew and battalions is very supportive in terms of decompressing. We spend an enormous amount of time training. Trusting each other is paramount. Having that telepathy, knowing what each other’s tendencies are. You have to fit naturally. It’s about understanding your role. It’s a sense of timing, effort, and attitude. It’s that bond we have as a crew. We’re tight and I’m lucky I have this type of profession.”

"We're in a new era of firefighting because of climate change. To witness this kind of fire behavior is huge."

But add COVID-19 to concerns on the job and the stress levels rise a degree or two when a patient fighting for his life doesn’t have a mask on, or people running from a fire come running towards Bozzo.

“We have to treat all medical emergencies as if they all have COVID,” Bozzo said. “A lot of the concentration is keeping yourself safe. When you’re climbing into a car to stabilize or soothe a patient, you can’t do that without protecting your face. It takes some of the personal touch away. It adds that barrier.”

Bozzo has had members of his battalion catch coronavirus. Some of them told him it was like a cold. Others said it was the worst feeling in their lives. More than 20 firefighters across the country have perished from the virus.

“I’m 49,” Bozzo said. “Some were younger than I. The anxiety is that you hope you don’t bring it home to your family. It is stressful and fatiguing. You want to hug your kids and wife.”

The first 60 days of the pandemic were heartwrenching for Bozzo. With 48-hour shifts, he would come home for four days and either not sleep in his own home or his bedroom, for fear of possibly giving COVID to his family. Over time, he began to feel slightly safer when returning from a shift. “It’s always hanging over your head like a dark cloud,” said Bozzo, who has been tested five times. That dark mental cloud was physically more prevalent during the fire season in California, which continues to break records each year.

Yet Bozzo finds ways to decompress through exercising and coaching, which he has found time to do in the fall, returning to his high school roots at Stevenson School in Pebble Beach to assist the boys water polo team, where his son Luca is one of the team’s elite snipers in the water. The passion he has for coaching sports helps ease the trauma that builds from a demanding field of work.

“Coaching is therapy for me,” Bozzo said. “I love to share my mistakes and successes with kids. I’m trying to set the bar for them. My Middlebury lacrosse coach once told me if you’re going to make a mistake, make it so loudly that you learn from it, so you won’t make it again. But don’t hesitate. If it’s the wrong decision, then you learn. I’ve taken that with me and passed that on to my colleagues and the kids I coach.”

Mistakes in firefighting, however, can be tragic. Over the years, Bozzo became aware there wasn’t a modern device capable of tracking the whereabouts and progress of firefighters during an emergency. “When I first came on at Contra Costa, we lost two firefighters,” Bozzo said. “The report that followed said we didn’t have a very good way of tracing fires. We used to do it off the top of our heads. Pencil and paper don’t write fast enough when you’re going from a two alarm to a four alarm.”

So 12 years ago, Bozzo’s life took an entrepreneurial turn. He developed what is called Tablet Command, a device that is used by over 175 stations across the nation and Canada, and helped save four lives in the Carr fire in 2018. The firefighters were able to escape being burned up during a “blow-up,” when fire behavior becomes explosive and erratic. The digital device tracks fires and resources in emergencies and creates notifications in real time for responders in the field.

Throughout his 24 years working in the field of firefighting, Bozzo has been helping to save lives. But saving the life of another firefighter has been a positive result of creating Tablet Command. With all the risks he’s taken due to the unpredictability of fires, it’s rewarding to be able to add some stability to the craziness of his job.