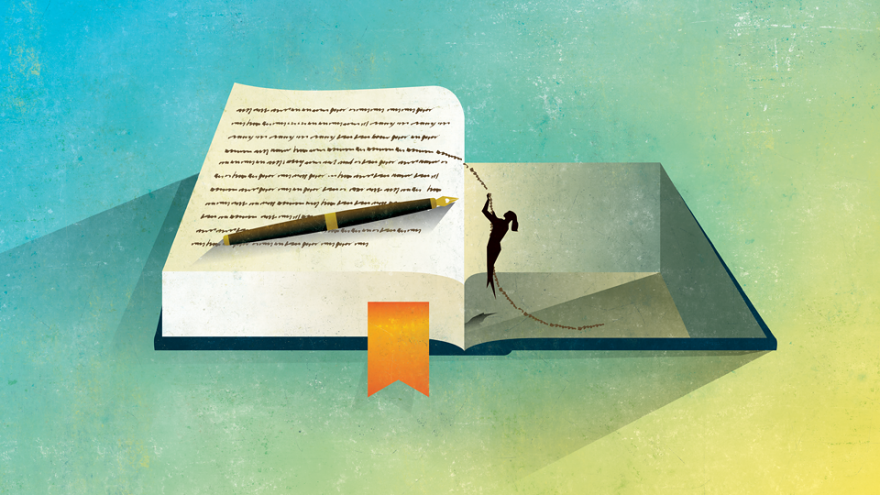 Beth Robbins, MA English ’16 had a clear view of her driveway on that muggy September night when she sat on the living room couch, an untouched glass of wine nearby, waiting for her husband to come home. He was late, really scary late, so when the police car pulled in, lights flashing, she knew he was dead. But she decided, maybe, just maybe, she could postpone his fate—she wouldn’t open the door.

Robbins writes about that moment in her book, A Grief Sublime, and about how the policeman told her Steve had died in a car accident. She writes about suddenly being in the place of not knowing what to do next, how to react, who to call. In an instant, nothing was as it had been and she was on the threshold of new feelings and sensations. “On the night of Steve’s death, I was thrust into a realm I had previously intellectualized but was now forced to live.”

She calls it a liminal space, and it provides the basis of the writing she began a few days later as a way to work through her grief. For years, she had been studying and teaching about the Romantic poets, especially John Keats, who explored being present in the not-knowing. So as she navigated her new existence as a widow with all the shock and uncertainty it brought, she didn’t turn to the self-help books about stages of grief—she turned to the poet whose words resonated with her.

Robbins first discovered her passion for Keats when she was applying for a position as an English teacher at the Berkshire Waldorf High School in Stockbridge, Massachusetts. She was asked to prepare and teach a lesson on the Romantic poets, because that’s what the students were studying. She ended up teaching about “Ode to a Nightingale.” She says, “I absolutely fell in love with Keats in my preparation for that lesson.” She got the job and for over 15 years has been teaching the Romantics and Transcendentalists along with other subject areas.

It was her love for Keats that first brought her to the Bread Loaf School of English in 2013. “I had been longingly reading the catalogs for years. That summer I saw that Isobel Armstrong was teaching a course about the Romantic poets and I decided the time had come—I had to apply.” Armstrong was inspiring and fired Robbins up even more about her favorite poet. “I became excited about Keats’s letter, and his ideas and words began to inform everything I had been thinking about.”

The letter she refers to is the one in which Keats explains negative capability—“when man is capable of being in uncertainties, Mysteries, doubts, without any irritable reaching after fact and reason.” This was the realm of the liminal, and that’s where she found herself after Steve’s death. “‘Ode to a Nightingale’ became a poem that I experienced viscerally; I felt myself seen through his words, then lifted out of the limiting self into the realm of the imaginative.”

She was journaling daily in those days after Steve’s death but a turning point for her writing came when she decided to attend Bread Loaf in Oxford in the summer of 2015—just nine months after becoming a widow. She was still in shock and still struggling when she signed up for a course taught by Christine Gerrard on 19th-century authors. “I was experiencing the poetry in a new way. It had a power, like your body is sort of lit. Whitman writes about the body electric and I got it.” Robbins went to Gerrard, explained what had happened with Steve, and asked if she could do a different kind of writing for the course, in which she could dialogue with the poets. Gerrard agreed as long as it was based in scholarship. Robbins’s writing that summer became the basis for her book.

Robbins engaged with Whitman and Keats in that course, delving into how they lived with sorrow yet had their transcendent moments. And in her feedback, Gerrard continually pushed Robbins to tell her own story as well, her dealings with sorrow. “I did it very grudgingly,” Robbins says, “and I wrote way less about myself at that point than what’s in the book. I just couldn’t go there yet.” But it was a beginning and by the end of the summer, Robbins began to think seriously about writing a book. In particular, she wanted to write a book that honored Steve and the life they had created because it still seemed incomprehensible that it would just end.

Robbins had always wanted to be a writer and she was getting positive feedback about her talents. But as every writer knows, writing a book is hard and she’d never done it before. She didn’t find the writing part difficult—she already had thousands of pages of her journal— but she was producing fragments: memories, poetry, narrative, or if she got stuck, etymology. “I love defining words!” With the help of a friend, she began to organize her output into folders and work it into book shape.

She also found an editor, who helped her delve even deeper into her own story, so much so that the book began to be about her and her experience. Again she turned to the poets. “I needed to be reassured of my experience of Steve’s death, which was absence and presence, both at the same time. I just needed to know that my experience had a truth to it.”

And as writing will often do, it brought about a catharsis, and a coming to terms with life. Robbins went into creating the book in partnership with Steve, feeling he was very much alive and connected with her, and came out with a new clarity. “No matter what I might experience now as a continued connection, the Beth and Steve marriage is over. He is dead. That kind of clarity has brought a different kind of grief with it. It’s a different kind of closure. I’ve had to say, ‘Okay, this is the next part of my life.’” She adds, “It’s important to remember that liminality is a transitional space you move through. I felt how I did that was up to me—I didn’t let myself be a victim. And what I have gained from it is the amazing gift of writing and a new path forward.” 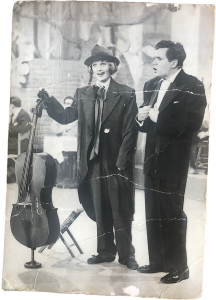 “Steve gave me this postcard when I turned 40. He was very, very funny, and I like to be funny, too, so the goofiness of this photo with Lucy and Desi was very much our relationship. We brought that out in each other and we were each other’s best audience.” On the back, Steve wrote that he would give Beth 40 more years of love and signed it with his signature drawing of a bald-headed, bearded funny face—him.

“I never liked Laurel and Hardy but through Steve, I began to find the humor in them. Around the time we married, we traveled to Chicago, and in the gift shop in the hotel, there were these Laurel and Hardy ventriloquist dolls for sale. I fell in love with them and wanted to buy them but Steve said they were too expensive. I was disappointed but that was that. A year later, on our first anniversary, we went out to dinner and when we got home, we heard something coming from the living room. A Laurel and Hardy movie was playing on the TV and there, sitting and watching, were the two ventriloquist dummies! Steve had set the whole thing up with the timer on the VHS and it made me so happy. Laurel and Hardy were my anniversary present!” 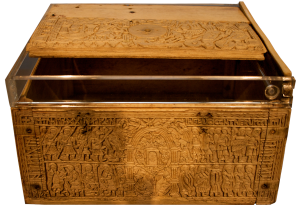 During a class Beth took at Oxford on Anglo-Saxon literature, the professor, Francis Leneghan, pulled out a replica of Franks Casket, a small eighth-century Anglo-Saxon chest made of whale’s bone that resides in the British Museum. Originally, the sides and top were carved in relief with scenes from Roman, Jewish, Christian, and Germanic traditions but only one panel remains in existence. The replica, however, shows the panels as they once were and Beth became obsessed with the chest and all the mysteries the various panels held. “I love the whys of it. Why are these two images in juxtaposition? Why does this panel tell this particular story? Is there a certain way to read the panels and how do you know which one is first?” She keeps her own replica on her mantel and is making the chest an important part of a novel she is writing.