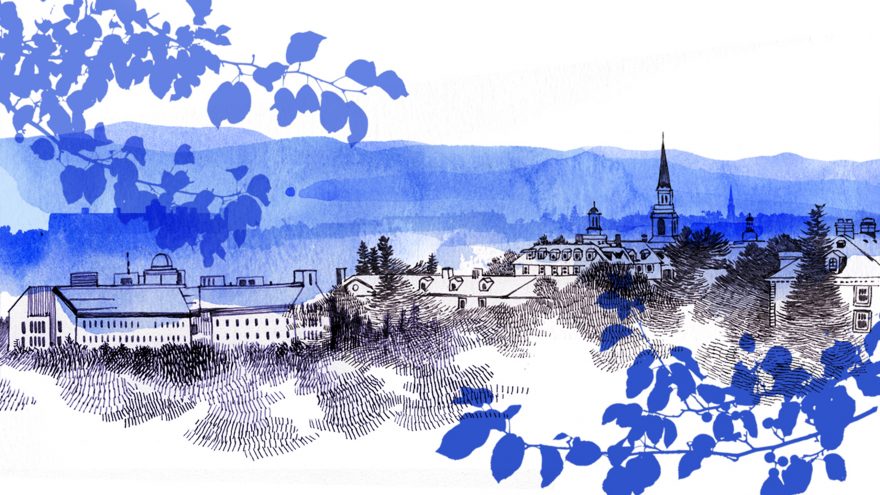 Institutions of higher education are “in the crosshairs and at the crossroads” of polarized public debates.

That’s the phrase that Robert Orr, dean of the University of Maryland School of Public Policy, used in an article I read recently—and it struck a chord with me.

We know of one crossroads that is here: climate change and the opportunity we have to turn the corner in addressing the challenges before us. It’s not only because so many reputable scientific organizations have issued reports that demonstrate the seriousness and economic impact of current climate change trends. It’s also because, as a college, we have two major advantages. First, we have a greater degree of consensus around climate change issues than exists in the wider public. Second, we possess governance structures that can achieve manageable, locally defined environmental goals.

We put those two advantages into practice in January when we launched Energy2028, Middlebury’s new bold energy plan for the next 10 years. It promises we will reach 100 percent renewable energy sources on our core campus, significantly lessen our energy consumption, reduce and eventually eliminate our investment in fossil fuels while protecting our endowment, and mount a large educational initiative addressing climate change.

Here’s how we did it.

First, we used basic consensus to stay at the table, no matter how long it took. Middlebury has the oldest environmental studies program in the nation, and a long-standing “green” ethos. But we were uncertain about our next steps—and that uncertainty created an impasse. While most leaders would have prioritized a “winnable battle” and moved on (and I was tempted), I noticed that our stakeholders—the environmental council of students and faculty members, the student environmental group, and the trustees—kept meeting through the uncertainty.

Why do they keep meeting, I wondered, if they never come to consensus? Because they shared an unspoken bond of pride in our environmental education, and that pride kept them coming together.

Next, we used basic consensus to imagine change. Our students asked us one thing: How were we going to educate them, as Middlebury’s mission statement promises, “to address the world’s most challenging problems”? That simple question focused our work on the educational aspects of these issues, rather than the political ones.

Then we used governance structures to build on local collaborations and successes. Academic governance at Middlebury—and at most colleges and universities—can be time-consuming and unwieldy, but as momentum began to gather in our conversations, small and large forms of governance began to coalesce into something like organizational power.

There was a new openness in conversations with the administration and the trustees. Buildings and grounds personnel identified the need for new infrastructure to measure energy consumption. The students held a referendum. The faculty began to imagine new curricula. The trustees talked to our endowment manager about new tracking technologies.

Finally, we used Middlebury’s governance structures to create interdependent leadership. When we designed the final plan, we focused on interdependence. No single part of the plan was going to work without the other, and no part of the plan could be approved without the other. This insistence on interdependence reduced the potential for direct competition while preserving the collaborative competition that will increase our common purpose.

Higher education has enough local wisdom and local practices to fight the new normal. We have traditions of scientific and humanistic inquiry that can create a baseline for climate change conversations.

In this most crucial of environmental ages, educational institutions have the distinct capacity to persevere in pursuing local change. Middlebury is leading the way—and I invite other campuses to follow our lead.