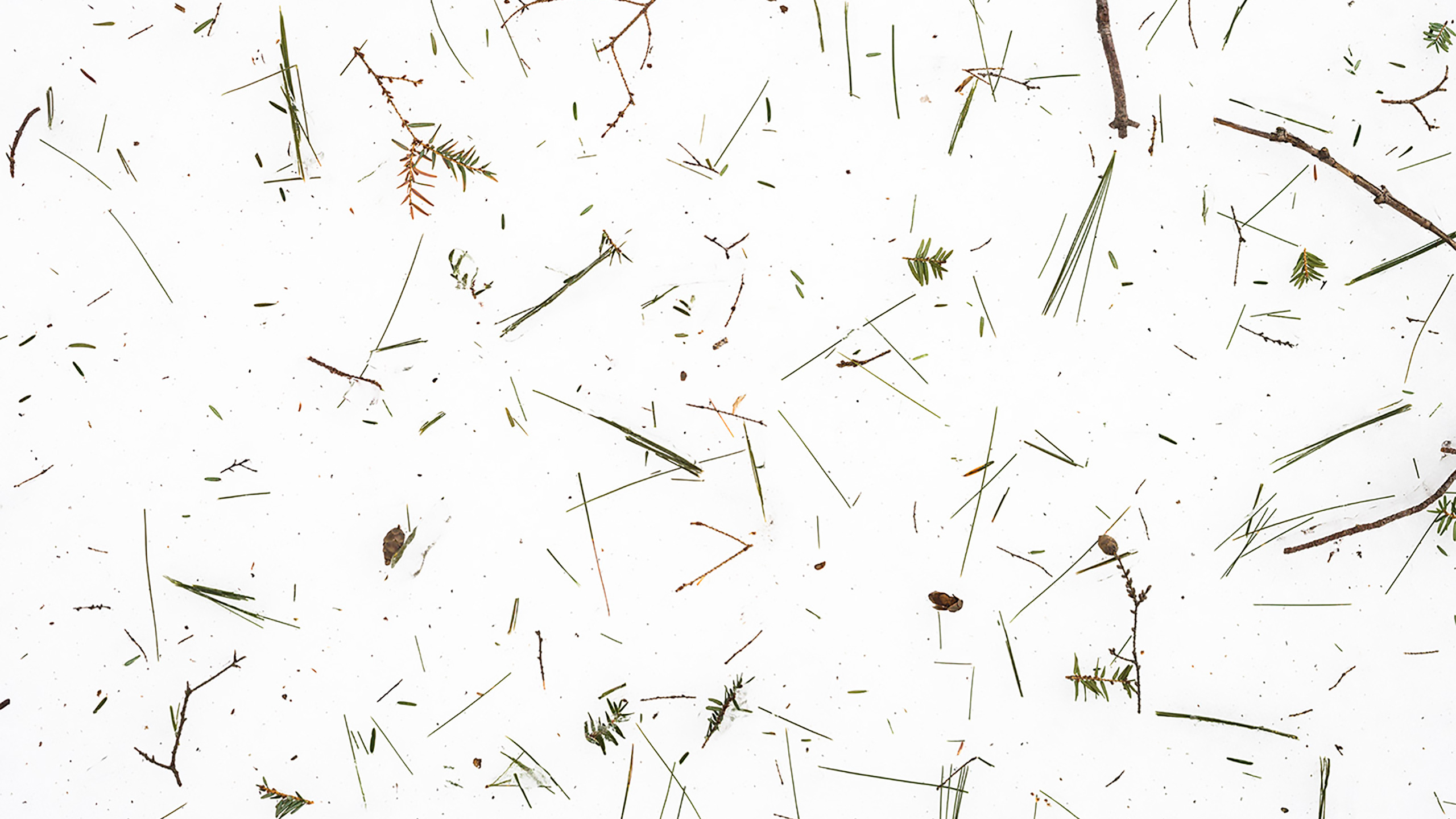 Vermont’s woods are my home. I walk with the camera nearly every day along the logging roads and deer runs in this second-growth forest. As I photograph, I work to keep the pictures straightforward, specific, and unromantic—just recorded moments from the lives of the trees.

Our core sense of beauty arises from our deep connection to the natural world. We humans are of the forests, and our urbanity rests upon them. Trees produce oxygen, paper, building materials and fuel. They retain rainfall, reducing floods and droughts. They provide clean watersheds, prevent erosion, moderate the climate, recycle nutrients, store carbon, and are home to insects, birds, and animals. But these forested landscapes are provisional, for all are managed, working timberlands—under private, state, and national care. Most of the productive forest in Vermont was once farmland, and all of it has been logged repeatedly.

With the decline and demise of Vermont’s hill farms during the late-nineteenth century, the forest reasserted its presence on the land. In 1870, forest covered about a quarter of the state; today, more than three-quarters is woodland. This remarkable turnaround has taken place on what is overwhelmingly private property. Timber harvesting takes place on a regular basis in a long, agricultural-like cycle, which is not to say these lands are unsightly or provide impoverished habitat. The vigorous conditions of the Northeast naturally produce a diverse and lush forest.

Although the so-called “natural world” is neither more real or true than is the human-made environment, it may give us more space to consider our own nature. The human world is so intentional and manipulated that we easily become reactive and discursive; some distance from society usually allows us to see and contemplate with more clarity. The forest offers an interconnected complexity and vastness that give us perspective and balance. Our psyche needs the forest, in the immediate sense of connecting with the sights and sounds of an unfolding walk and in the abstract way we imagine into  the deeply mythical space of the forest. The former sensations can be paradoxically relaxing and exciting, resulting in a calm but precise hunter’s awareness. The latter archetypes may be spiritually ascendant or physically terrifying, but all reveal ancient foundations of human experience.

Trees give a proportion to our human life, even in the  city. Like us, they are suspended vertically between Heaven and Earth. The trees are not there without the space around them. Likewise, the photograph is not there without the  frame around it and the space around the frame. The components of the photograph are lost in their relation to one another and in relation to all they are not. One of the appeals of photography is that it unifies and puts everything into relation within the frame. The underlying reality of the photograph is the unity of the parts.

Philosopher Gaston Bachelard writes that, despite physical facts, the space of the forest extends infinitely in our minds. This immensity is within us.2 We respond with a visceral poetry to the soaring, variable, and interdependent forms of trees. The complexity of the forest encourages a realization of process, of ourselves in the process, and of the direct quality of our experience in the present.3

The root of romanticism is the accurate realization that we humans are not separate from the world. In the romantic moment, we discover a joy in shared existence. But our conceptual minds quickly follow to form an idea of that event that we can hang onto. This mental construct is abstracted and isolated from the original, free-flowing touch with reality. The concept is not the experience. This difference makes the mental formulation of romantic ideals and standards rather deadly.

Analytical thinking often discourages a perspective of the whole. We tend to compare, and we do so through isolating subjects with thought. Contents are identified and separated from their context by thought. Subject and ground can be seen as one only without comparison and identification. Beauty is holistic, connected, and experienced without thought. Our existence is no different. We may be able to think we are on our own, but our reality is highly relational, contextual, and dependent upon all aspects of our environment.

The forest offers an interconnected complexity and vastness that give us perspective and balance.

At the 1975 “New Topographics” exhibition at the George Eastman House in Rochester, New York, the featured photographers broke from the idealized, God-is-here imagery of American landscape photography (as artfully rendered by Ansel Adams, Eliot Porter, and others).4 This jump-started a rejection of romanticism and an embrace of the vernacular. Soon, a movement was created with photographers’ insistent inclusion of the human presence, and it opened our eyes to what we were ignoring and what we, as a global society, were doing to our Earth. The low-key, ordinary aspect of the New Topographics pictures was a valuable corrective to the nostalgic vision of blessed America’s glorious, untrammeled natural beauty. That artistic change parallels the tempering of early, purist forms of environmentalism into our contemporary acceptance of human society as part of the workings of our planet.

Only a few of my photographs include direct signs of human presence, but the underlying truth of the Northern Forest and of my images is that all that we see has been shaped by human activities and agendas. For me, this forest is a socially constructed landscape, but hopefully my perspective allows one to take joy in the natural setting even as one realizes both the past damage and the current threat of economic forces on the land. As photographer Robert Adams writes: “Edward Thomas, a country poet, observed that people and trees are ‘imperfect friends,’ citing the tragic nature of people and the silence of trees.”5

Any romantic qualities in my photographs should be tempered by the whining of mosquitoes and mad circling of deer flies, because I was being bitten during most of the fair-weather exposures. During the ten years I worked on this book, the tick population in the local forest surged. While I explored the woods, a variety of ticks, some no doubt carrying Lyme disease, explored me. In one month of tick season, I found 245 ticks on my body, and the one-day high was twenty-seven. But few were attached because of obsessive self-inspections.

After many years of living in Vermont, I still find the forest’s seasonal changes startling. These dynamic transformations are integrated in the two sections of “time composite” photomontages that open and conclude the photographic sequence in the book. Past, present, and future coexist in a time cycle incarnate. These photomontages attempt to materialize that notion of the past and the future existing in the present moment, in the present form. Our fascination with photography is grounded in such accords: In the unity of time, the photograph presents a moment of the past right now; in the unity of space, the photograph places all its contents onto the same surface and into relationship; and in the unity of time and space, the photograph shows that these elements are not separate. The time composites are embodiments of such change. They arise from the brutalist instinct of throwing things together, the Hadron Collider impulse. I have worked on variations of this change-in-the-landscape theme for more than twenty years. I think this current approach works well, because both continuity and change are immediately evident in the images.

The landscapes of the time composites were carefully photographed from the exact same location at different times. Since these images are essentially presented as one view, they feel very close to being “straight” photographs to me. At first, I marked the camera’s position with a stake, using a plumb bob suspended from a tripod. A set of exact tripod measurements and ribbon guides placed in the landscape at the sides of the view would complete the initial set. This method worked, but it took at least an hour, sometimes two, to reset the tripod and camera precisely. Very frustrating.

Our conceptions of time and seasonal change may be challenged by the specificities of the yearlong chronology of straight, single-exposure photographs.

After suffering a heart attack during one particularly exasperating reset, I changed my procedure. I now attach a camera mount to a tree or leave a tripod in place, weighted down with bricks, for a full year. (I am happy to say I have lost no tripods to theft.) These time composites, and all the other images in the book, have not been digitally manipulated. Computer tools have been used to piece together the different images, but nothing else has been created or altered.

Our conceptions of time and seasonal change may be challenged by the specificities of the yearlong chronology of straight, single-exposure photographs. In particular, ideas of spring and autumn are often simplistic. Vermont gives these preconceptions a good shake. The northern locale, combined with the mountainous terrain, produces a highly variable weather cycle. The elevations of the pictures vary by as much as 2,500 feet, which can effect a two-week difference in climatic conditions. As writer John Elder has observed, “The weather extremes demand a constant reorientation from New Englanders.”6 I am sure he would include wearing a warmer coat in this adjustment, but he points to more encompassing changes of attitudes.

John Huddleston is the Fletcher Professor of the Arts Emeritus. This essay is an excerpt from Huddleston’s latest book, At Home in the Northern Forest, which can be purchased here.