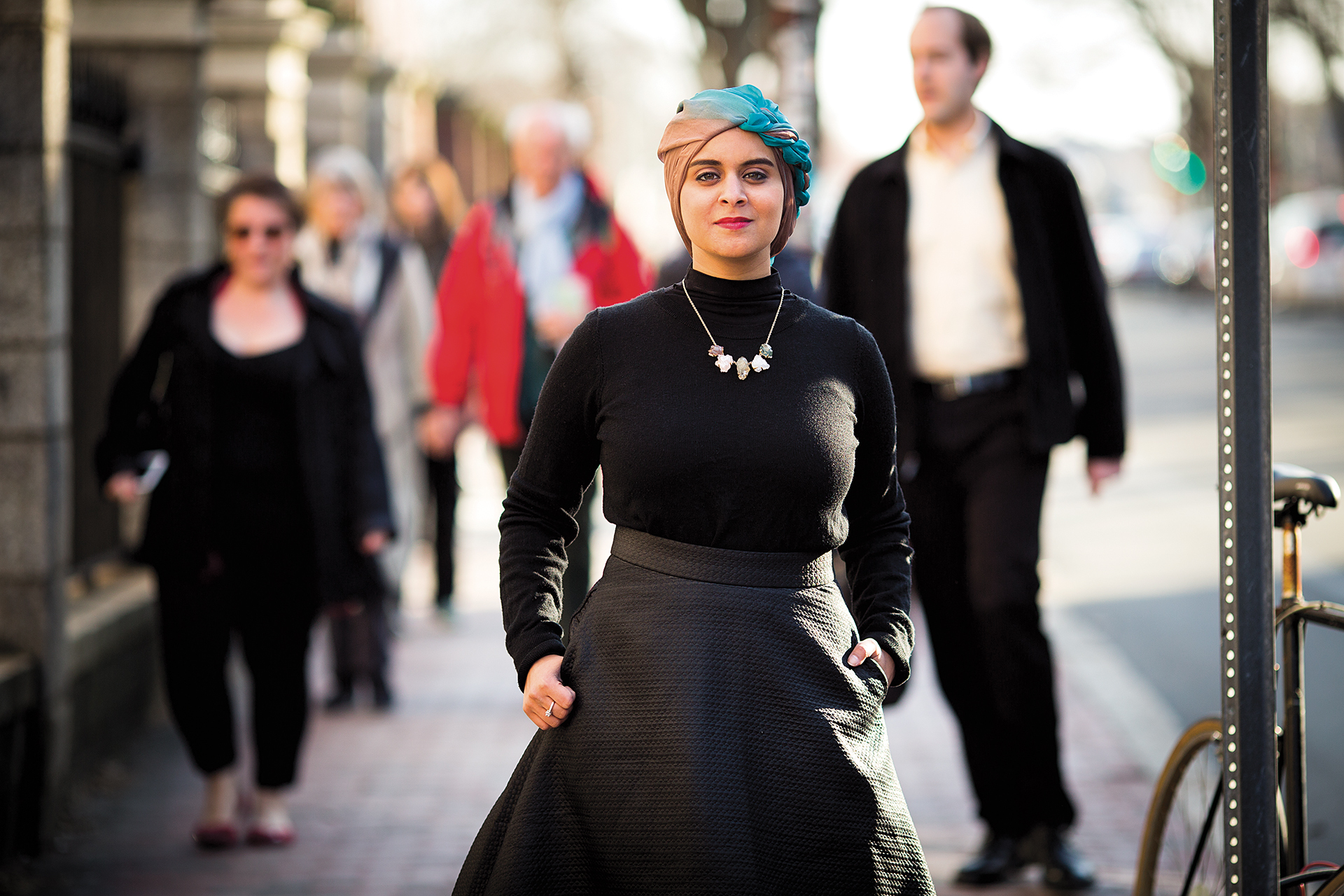 In an elementary school classroom on the third floor of the Islamic Society of Boston Cultural Center, Rana Abdelhamid ’15 is teaching a group of women how to yell. It’s not an easy task. Abdelhamid demonstrates the self-defense move again. She settles into a fighting stance, her right foot back, her left leg bent slightly. She raises her fists in front of her face, which is framed with a royal blue headscarf. Twisting at the waist, she launches a powerful punch with a loud, sharp “KI-YAH!”

“On my count,” she says, urging the nine women in front of her to try. The women are part of a daylong workshop hosted by WISE—the Women’s Initiative for Self-Empowerment—an organization Abdelhamid founded six years ago, when she was just 17 years old. WISE teaches self-defense, leadership, and social entrepreneurship skills to Muslim women, a task that has grown even more urgent for Abdelhamid, now 23, in the face of a spike in hate crimes against Muslims and increasingly strident anti-Muslim rhetoric.

“One,” Abdelhamid shouts, and the room dissolves into embarrassed giggles. Only one student yells without any self-consciousness: six-year-old Kenza, in her heart-print dress and pink-and-white-striped headscarf, who is attending the workshop with her mother.

“This is important,” Abdelhamid says, gathering the women around her. They range in age from teens to 40-somethings. Some wear hijabs, the traditional Muslim headscarf; others don’t. “As women, we’re told not to be loud,” she says. “We are programmed to be respectful, to be nice, to smile. We giggle, even when we are threatened. I needed to use these self-defense skills once,” she tells the class. “But I didn’t have the confidence to use them.”

“I felt a tug at my hijab,” Abdelhamid begins. She has told this story many times in the last seven years; it has lost none of its power in the retelling. Abdelhamid’s animated features still as she recalls walking alone down a New York City street. A man approached her from behind and tried to rip off her hijab. “I remember the hate in his eyes. I felt very vulnerable and very alone,” she says.

The physical fear came first. Her attacker was enormous in the eyes of the petite 16-year-old. She ran. When she was safe, she locked herself in a bathroom and cried. Then came another, bigger fear, an uncertainty about her place in American society: “Why do people see Muslims in this light? Does everyone see me this way? Why does this happen?”

Abdelhamid knew such discrimination and hatred existed. She had been an eight-year-old Muslim-American New Yorker on 9/11 and had seen the attacks and suspicion the Muslim community endured in its wake. At 16, she had just begun wearing the hijab, a personal expression of her culture and religion that also made her a visible target for those who misunderstood her faith. She did not know how to counteract that hate, but she did know how to defend herself.

From the age of seven, Abdelhamid had studied Shotokan karate. Her parents had enrolled their shy daughter in the class to give her the confidence she needed to stand up for herself in the sometimes-chaotic environment of her New York City public school. In the aftermath of her attack, Abdelhamid embraced karate as a tool of self-empowerment and of self-defense; today she holds a black belt.

Karate made Abdelhamid feel less vulnerable, but she still felt alone. She wondered: were other Muslim girls facing the same issues? As a teenager, Abdelhamid was preternaturally attuned to the importance of community. Her mother is a human rights activist and from a young age, Abdelhamid had seen the impact of domestic violence in her community in New York, where she was born, and in Alexandria, Egypt, where her parents grew up. When she was attacked, Abdelhamid had been walking to her volunteer job at a domestic violence shelter.

Those two pieces—self-defense and community building—formed the foundation blocks of WISE, an organization that began with a very personal goal: to help one teenage girl heal.

The idea of a 16-year-old girl teaching self-defense to her peers was not well received at first. Abdelhamid remembers pitching the project to an imam at a Queens community center: “He laughed.” He explained that the center already had classes for Muslim women; they were all religious education classes. “I learned later that after I left he actually ripped up my poster,” she says. The rejection only emboldened her—that “activist spark,” she says now. She was determined to strengthen her argument. She began researching other organizations, gathering data, and seeking out mentors and allies.

Her perseverance paid off. The first WISE course was held the summer of 2010 in Brooklyn. Abdelhamid was nervous as her father drove her to the class; she had never done anything like this before. More than a dozen teenaged girls attended, and Abdelhamid says, “it was that sisterhood that I have always wanted to find.”

That first eight-week workshop combined self-defense training with conversation; the girls had a safe space to share their experiences of being Muslim women in New York. For Abdelhamid, the self-defense portion of the class is key. It attracts a wide variety of women—those who wear the hijab and those who do not; those who have identified as Muslims throughout their lives and those new to the faith; those who consider themselves feminist and those who do not—which makes the conversations among the women richer. “We have debates in the class and opportunity for learning,” Abdelhamid says. “It has definitely challenged my assumptions and my beliefs.”

At the end of the workshop, Abdelhamid thought that she was done—“I felt better,” she recalls thinking. Then she got a phone call from one of the girls in the class. The girl was in tears. She had been on a New York City bus. “Why don’t you go back to where you came from?” the bus driver had demanded as she fumbled with her Metro Card. “Because of the class, I knew how to respond,” the girl told Abdelhamid. She recorded the bus number and knew there were people she could ask for help. “How do we keep this going?” she asked.

“Google ‘images of Muslim women,’” Abdelhamid says. “I can actually do it for you right now.” She reaches for her smartphone and quickly scans through a dozen or so text messages before entering the search term. Of the first 20 pictures that appear, only three show women in hair-covering hijabs. The other 17 photos are of women in black niqabs, a face-covering veil, or black burqas, a full-body veil.

On this day in late March, Abdelhamid sits in a coffee shop in Cambridge. She is dressed stylishly in a long, bell-shaped black skirt, brown boots, and a patterned shawl, which she gathers in her lap. Her personal style is on display in every detail, from her chunky rings and her penciled eyebrows to her hijab. Today it’s a burgundy scarf—a complement to her lipstick—tied closely to her head in a style she likes to call “the urban turban.” “This is not what I look like,” she says, gesturing to the dominant image of Muslim women displayed on her phone. “We are trying to diversify and elevate the narrative.”

WISE began as a self-empowerment effort—first for Abdelhamid and then for the 500 women who have participated in WISE’s programs to date. The organization now has volunteer-staffed chapters in six cities in the U.S. and Europe; some workshops last a couple of hours, while some last months. The media has embraced WISE—at the recent Boston workshop, two camera crews filmed the self-defense class—and slowly, so have Muslim organizations that formerly laughed at the concept. Once a premed student turned international politics and economics major, Abdelhamid is now pursuing a master’s in public policy at the Harvard Kennedy School and hopes to turn WISE into a full-time job upon graduation.

As WISE’s profile has grown, it has also become a platform for educating the public about Muslim women. It’s a path Abdelhamid treads cautiously; she does not want to be seen as a spokeswoman for some 800 million Muslim women. But neither can she stay silent.

When Republican presidential candidate Donald Trump called for a ban on Muslims entering the United States; when his Republican rival Ted Cruz suggested patrolling Muslim neighborhoods; when ISIS was connected to attacks in Paris, Brussels, and San Bernardino, Abdelhamid’s phone rang. “I get messages all the time, after every attack, from Muslim girls who want to know: I am wearing the hijab. Should I take it off?”

Abdelhamid tells the callers that taking the hijab off is as personal a decision as putting it on, that each woman must make a decision with regard to her safety and stress levels. Abdelhamid has made her choice: “I am defiant. I am going to wear it and I am going to be proud.”

As she works to expand WISE, Abdelhamid has introduced a new project: Hijabis of New York. Inspired by the popular Humans of New York blog, Hijabis of New York documents the experiences of women who wear the hijab—in New York and in cities around the world—with a portrait and a one-question interview.

For Abdelhamid, the Hijabis of New York is a digital version of what she calls the “hijabi nod,” that brief moment of recognition and connection between two women wearing hijabs as they pass each other on the street. The project showcases the diversity of women who choose to wear the hijab, even as it builds a virtual community among them.

The questions Abdelhamid and the project’s other photographers pose to these women on the street are thought provoking. She blanches at answering one herself: “What are you struggling with at the moment?”

On the blog, struggle is a common theme. “With staying true to myself and being who I want to be,” says one woman in a hijab painted with watercolor pastels. “Lately, I’ve been struggling with my faith,” admits another in a royal purple hijab.

Abdelhamid pauses, starts, stops. She’s struggling with the same things her classmates are: balancing her class work with her social life; finding her own identity in her 20s; realizing her big ambitions.

She starts again: “I’m really struggling with the hateful rhetoric. It’s hard. I really, really feel American. I feel very proud to be American, and then when I read these things…it makes you feel very vulnerable. It makes you feel like a second-class citizen. These are things that I’m grappling with and that’s hard because I’m leading an organization that is teaching people not to feel that way.”