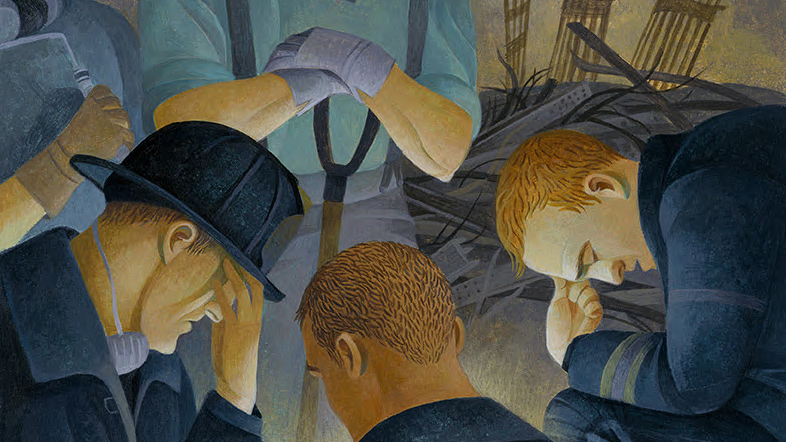 Can you burn? Can you rig?” With a nod of my head I answer the battalion chief. The white shirt and gold badge on top of his fire helmet contrast with the night. His long, thin arm points past the crane and into the jungle of iron and ash. “We need a beam cut and rigged out of the way.”

Two firemen help me drag the torch hose around the line of cops in the bucket brigade. There are maybe 100 policemen. The line snakes around the crane into the jungle. In every hand there is a bucket of ash being passed down the line until it reaches any opening in the street. At the end, in front of the payloader, is an evenly spread pile of the ash. “Body parts.”

“Looking for body parts,” one of the firemen blurts out as he drags the torch. The dogs sniff through the pile without stopping. Someone gives the nod, and the payloader scrapes the ash into its bucket.

I climb up a beaten path in the ash and over a set of mangled beams. There is another battalion chief with a “10” on his helmet standing on a set of beams that are pinned on top of one another. He sizes me up and then looks at the ironworker insignia on my hard hat. “What local union you out of?”

“Where should we cut it?” he asks. We climb in the ash pockets around the iron beams.

“These are the exterior structural columns. They shouldn’t be that bad,” I say. “They’re a lot lighter than the interior columns. Maybe only about three tons a piece.” I show him the stress points on the beams. He marks the spot so the cut beam will not collapse the pile. “Oh, before you start, there may be a car on the bottom of the pile, so get the hell out of the way if it catches.”

A golden flame shoots from the tip of the torch. I adjust the gas until the flame becomes five blue cones. Testing the torch, I hit the trigger, and it becomes a liquid knife. The four-inch-thick iron slowly heats, and when it becomes orange liquid, I hit the trigger. Molten iron shoots out. I lurch back, but my hand stays steady. As I work the torch, the iron beam starts to tear open. In the mix of the blowing ash and smoke, I catch the sparkle of the chief’s golden badge. He is watching my every move. He has maybe seven men around him. All of them are watching me. The torch jerks, and the molten iron blows back in my face. A splatter of iron becomes embedded in my neck, and a puff of burnt skin enters the respirator. It smells no different than the ash. The torch stops cutting, and I try to dig the iron out of my neck. The crowd of men, now maybe 15, steps toward me, until I regain control of the torch. Liquid iron starts to blow through the beam again.

Before I start the last cut, the chief orders me to stop and take a “breather.” The respirator is plastered onto my face by the mixture of sweat, ash, and smoke, but I finally rip it off. The air on the outside is no better. I sit down on the beam and look around. I see a woman’s shoe, a flat with elastic edges. It is dirty white with floral patterns. Fearing it will burn, I push it out of the way.

In sweeping motions, the blue flame rips through the last cut. The firemen move closer to me, but I try to look at nothing but the flame. The torch passes halfway through the cut. As it continues to blow through the iron, the beam shifts and the torch jumps, throwing liquid iron up into the air. My body springs away.  The torch drops into the ash. The chief drags me violently off the beam.

Twenty to 30 firemen stare at the beam and then at me. I get right up like nothing happened and slowly pick up the torch, giving myself enough time to check that all my body parts are still attached. The beam lurches but does not collapse. I raise my hand to call the crane. The glaring temporary light through the smoke makes the crane operator a blur. My hand signals slash through the air. The operator knows exactly what I need, and he drops the crane’s hook into my hand.

The crane slightly lifts and secures the beam. I see nothing again but the blue flame ripping through the iron. As I come to the final inch, the crowd of firemen moves towards me. The flame blows through the last scale of iron, and the beam jumps. An odor races up. It is pungent and heavy. I try not to gag. I try to stand straight. I try not to cry. With a lightheadedness, I move my hand slowly. The crane revs its engine, adding diesel to the smell of the ash and the decaying flesh. Slowly the mangled beam rises from the void. The crowd jumps forward. The beam swings out of control towards them. They don’t care. They jump into the void.

The crane’s thick steel cable strains as it eases the beam out of the void. My body leans into the beam to steady it as it rises. When it is finally over my head, the chief yells out, “Stop,” and my hand slashes through the air. The crane jerks to a halt. In metered words, the chief tells me to bring . . . it . . . down. Not knowing why, I bring the beam down to eye level and stop again. One of the men in the void hands the chief a shiny pry bar. He leverages his weight and pries a plastic slab from the dull metallic facade that was the tower’s skin. It is a crushed fire helmet, with a gold “10” still visible. He gives me the nod. With quick, firm thrusts, I signal the crane to get the beam out of there.

Around the void, the firemen make a circle. Every face is lit up—every eye on the void. In unison their helmets come off. Nothing is said.  There is silence. All the right hands touch a head, then a stomach, left shoulder, right shoulder.

The chief calls for a body bag. From the edge of the circle the bag is handed, head over head. But it is way too small for a body—it almost looks like a Glad bag. A small spade is handed down to the chief. I only look forward. I hear something slide from the neck of the bag to the bottom.

I offer my hand to the chief as he gets out of the void, but he lays the body bag with its contents on a beam and lifts himself out of the void. With his hand on my shoulders, he points me to the next beam. He picks up the body bag between his thumb and index finger and walks into the dark. As I climb over to the next beam, I notice all the cutting torches in the mountains of iron and ash around me lighting up the night.

Michael Ricci is a 1992 graduate of the Bread Loaf School of English and a union iron worker. Though reluctant to write about his experience as a first responder on 9/11, he says it was the late Ken Macrorie, a longtime Bread Loaf professor, who urged—and ultimately convinced—him to publish this work.