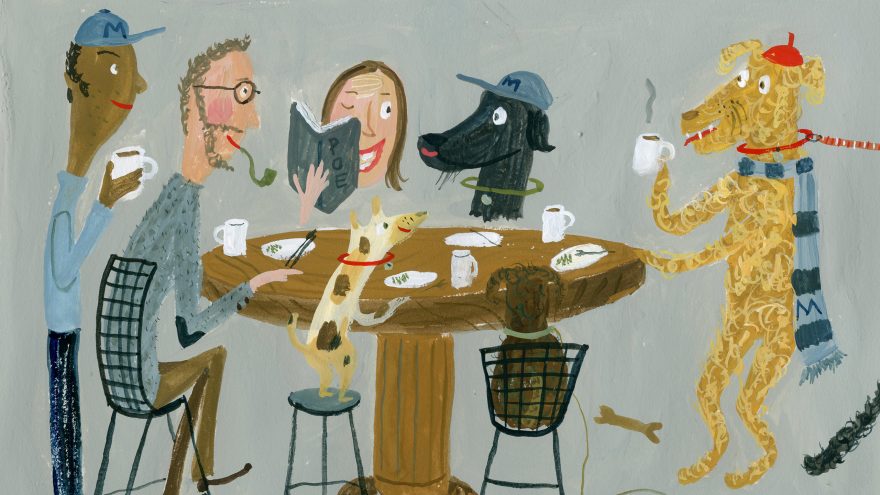 The other day I was walking on campus with my dog, a three-year-old Goldendoodle named Tom. We were approaching the Davis Library when we encountered a group of students, and as we passed them on the sidewalk, I heard one of the students say, “Oh, hi, Tom.”

He glanced up without breaking stride, as if to acknowledge the greeting, briefly looking back at the group as they proceeded down the walkway. Perhaps he was allowing for the person to say something else, or maybe he was thinking the same thing I was: How does that person know my [dog’s] name? I guess I shouldn’t have been surprised. Ever since Middlebury adjusted its pet policy to allow for faculty and staff to bring dogs to work (as long as the employee has an office in a building that is designated as “dog-friendly”), Tom has accompanied me to the office on most days. And this means that Tom meets a lot of people on campus—when we’re on our walks, when he’s waiting outside Wilson Café with a colleague (mine, not his) while I grab a coffee, or when people visit my office. Students, especially, seem drawn to him, particularly around exam time when their stress levels are high; it’s as if his soulful eyes and sheep’s-fur coat absorb and then dissipate any anxiety that they may have.

Tom is not alone in putting smiles on the faces of students, faculty, and staff; in just my office building, there are also Katie, the black Lab, and Thor, the, well, I’m not sure what breed(s) of dog Thor is, which is part of his charm. Over in the Mahaney Center for the Arts, there’s Frodo, a Welsh corgi. Frodo was the first dog to be registered as part of the new policy—Frodo’s owner, theatre prof Alex Draper ’88, proudly displays the designation in his doorway—and the little lad knows his way around the stage. (He steals the spotlight from Draper is this Q&A.)

And then there are Padma and Suka, Laurie Patton’s beautiful Great Pyrenees and Pyrenees mix. It has become a tradition at 3 South Street for the duo to make an appearance at the end of any dinner that the president regularly hosts for students, community members, and visiting guests. As I understand it, the appearance is a friendly signal that the evening is coming to a close, but on the occasions that I’ve witnessed their arrival, it’s had the opposite effect.

As soon as they see the dogs, people don’t want to leave.