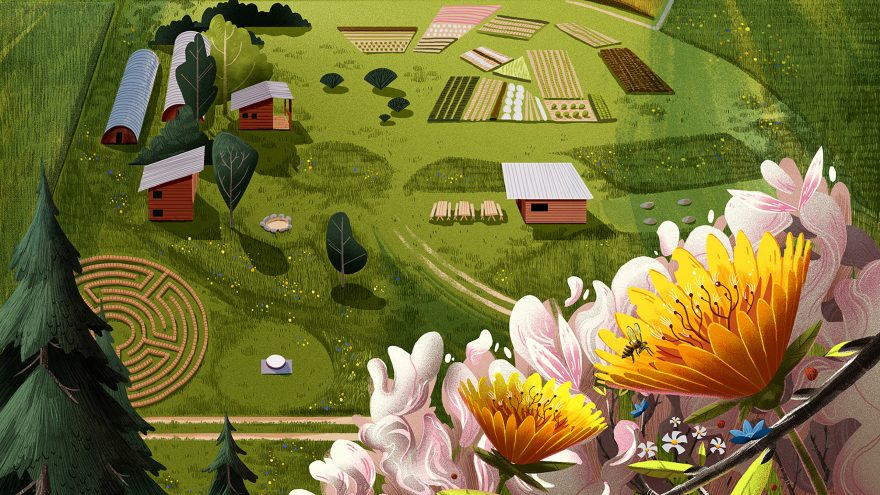 I took a walk with my dog out to the Knoll early one Sunday morning, on a late-September day that felt more like summer than autumn. It was quiet, as one would expect at that early hour on a weekend, the only other visitor a young man taking close-up photos of flowers with his iPhone.

I’m a bit chagrined to admit that it had been several years since I last visited the place, and its evolution from the College’s Garden, to Farm, and now to the Knoll was immediately evident, its nomenclature hustling to catch up to its functionality. Founded in 2003 by classmates Jean Hamilton and Bennett Konesni (both Class of ’04.5), what was once a vegetable garden on an eighth of an acre is now a robust site that serves as the heart of Middlebury’s Global Food and Farm program.

On that September morning, the garden was filled with pumpkins and sunflowers and chard, while colorful zinnias attracted flitting butterflies (and the one early-rising photographer). Beyond the beds and just north of a tiny garden shed (the one original structure from 2003), a couple of hoop houses sheltered tomato plants, the covered structures extending the garden’s growing season beyond the beckoning cold days (which were hard to image on this warm morning).

Over in the outdoor kitchen, a stack of pizza boxes rested on a counter adjacent to the wood-fired pizza oven; my dog made a beeline to the four picnic tables that stand just outside the space, nose hard to the ground as he snuffled about for fallen crusts. With my dog occupied, I wandered over to the latest addition to the Knoll, an intricate stone labyrinth that was constructed this fall. It’s part of what’s called the “serenity garden,” with the labyrinth joining a large round marble bench—a bench blessed by the Dalai Lama when His Holiness was on campus in 2012—in service of a setting as serene as any you could image.

My dog padded over to me as I looked over the arrangement, and I decided I should be moving along; the thought of him lifting his leg on the rocks—or worse, the bench—terrified me. We headed back down the dirt path toward Route 125; I’ll be sure to return, sooner rather than later.