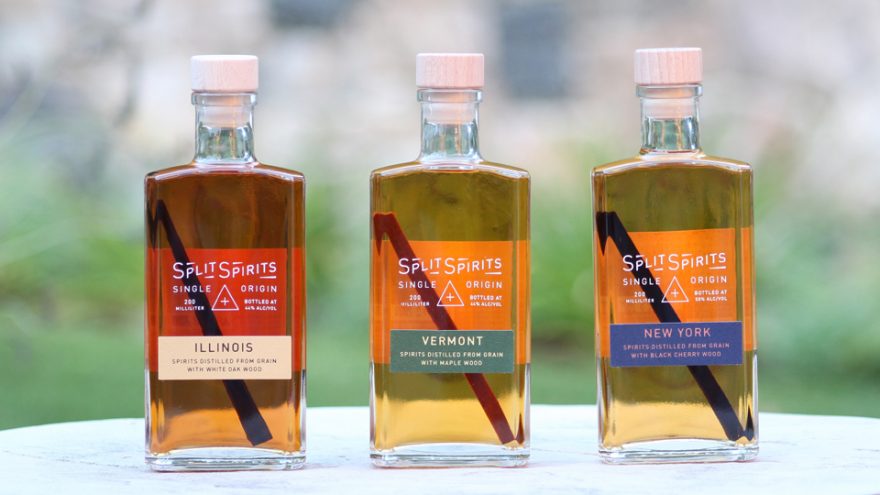 “If you had asked me when I was at Middlebury, ‘Could you envision yourself starting a unique whiskey brand?’ I’d be like, ‘Well, that sounds interesting. But probably not.’”

Still, Will Drucker ’08.5, founder of the craft distillery Split Spirits, says it all “kind of makes sense in hindsight”: the business draws on his fascination with science and experimentation, his love of sharing good food and drink, and his belief in the importance of sustainable agriculture.

Drucker majored in neuroscience but pursued his interest in environmental studies as a member of the Sunday Night Club. “I knew that I was going to be involved in sustainability in my career in one way or another,” he said.

After college, he returned to his home state of Illinois and worked in Chicago. On the weekends, he invited friends to his parents’ farm to “come together and celebrate good food.”

When he and his then-girlfriend (now wife) decided to move to New York City, they first spent the fall riding their bicycles down the Mississippi River, leaving Illinois in September and arriving in New Orleans around December. As they followed the harvest season south, they looked forward to stopping at farm stands along the way, but found hardly any, because most of the farms were dedicated to commodity crops for livestock or ethanol.

“They weren’t making food for people,” Drucker said. That thought stayed with him.

In New York, the couple toured small craft distilleries in their spare time, and that’s when Drucker started thinking about making his own whiskey.

“I really like being in places that make things,” he said, “so that there’s a tangibility component to it. And so I love that I was in a distillery that was making things in an industrial space but from food products that could be enjoyed with people and accompanying food. So it sort of clicked that like, wow, this incorporates all these things I like.”

But Drucker envisioned an approach more in line with his environmental values. “I realized a lot of distilleries are just using the same commodity corn and grain that I saw biking down the Mississippi River.” He thought about the benefits of making his spirits with sustainably harvested grains. “I could support farmers who are building soil fertility, building soil health, farming organically in a regenerative manner.”

And that got him thinking bigger. “I’m just a small player,” he said, “but if the whole industry started to shift toward sourcing grains that were either regeneratively grown or organically grown or hybrids that are being revived because of their flavor as opposed to just starch content, as a whole the industry could actually be a meaningful driver in terms of helping farmers who are already thinking about making the transition, showing that there’s a market for that and making that transition easier essentially.”

Drucker’s concept hit a snag, however, when he tried sourcing the charred wooden barrels used for aging the whiskey and giving it its color. White oak is the wood of choice because it’s watertight, but almost all of that white oak comes from the Missouri Ozarks. “There’s nothing wrong with that,” Drucker said, “but the curiosity in me was like, well, how would that flavor change if you made a barrel or tasted whiskey aged in a barrel made from white oak from Vermont or from Illinois or from California?”

He couldn’t find white oak barrels from anywhere else. “So we’re limited to one species even though there’s just shy of a thousand species of tree that grow in North America; and then within that one species, we’re sourcing it from one region of the country.”

Drucker decided to experiment. In 2017, he cut some white oak on his parents’ land in Illinois. He charred a “split” of it, stuck it in some locally distilled moonshine, and took notes over the next days and weeks. Indeed, the moonshine took on the flavor of the charred oak.

“I was like, well, that’s really interesting,” he said.

It opened up many possibilities. Drucker said, “If I’m not constrained by a barrel, if I can choose wood that’s not watertight because I’m doing this whole infusion method, you know, the world’s my oyster. I can slice up birch. I can slice up hickory. I can test what all these different woods might taste like. And so that’s essentially kind of how it began.”

After experimenting with a variety of woods and using unaged whiskey from several distilleries, he eventually settled on three place-based spirits (he doesn’t call his product whiskey* “because it never sees the inside of an oak barrel”): Vermont, New York, and Illinois. Each line is distilled from grains grown within that one state and infused with wood from the region.

Drucker quit his job in New York in late 2018 to focus on launching Split Spirits. While waiting to get federal approval to begin selling it, he started working with Middlebury’s Appalachian Gap Distillery, whose facility he is now using as his main base of operations.

“As we were ramping up production, I was helping sell their spirits in New York City because that was where I was based,” he said. “It allowed me to essentially bring my prototypes to shops and get their feedback and get the word out, sort of like guerrilla marketing, but then also help Appalachian Gap Distillery by breaking into a new market that’s kind of challenging to do. So it was a really nice win-win.”

The Split Spirits rollout started in December 2019 tastings in New York along with online sales. “We were doing in-store tastings multiple nights a week. I hired a really awesome woman to help me just because we had so many shops we wanted to be at and pour samples for people and tell the story.”

Drucker enjoyed the social aspect of the marketing and was pleased with the early response. “I developed relationships with a bunch of shops in New York, and they were excited about bringing Split Spirits on when it was finally available, which is exactly what happened. And it was super fun to be able to see this thing I created on shelves.”

Even after the busy holidays, orders were still coming in and business was looking good. But then, in March, COVID hit and essentially shut the city down. Drucker and his wife, who had bought a house in Manchester, Vermont, the previous year, moved to Vermont full time.

During the down time, Drucker focused on ramping up production at the Middlebury distillery and focusing on the Split Spirits website. And as warm weather came, he redirected his tastings from bars in the city to socially distanced farmers’ markets in Vermont. He’s currently focusing on getting more product into shops in Chicago as well as in San Francisco and Los Angeles.

The pandemic may have slowed the company’s growth and required Drucker to revisit his initial marketing approach, but he’s optimistic, and happy to be living in Vermont.

“We’ve kind of figured out a good sort of COVID M.O., so we’ll keep doing that but expand into areas where and when it makes sense to.”

That means sticking with the Vermont, New York, and Illinois spirits for now. But the future is wide open.

“You know, there are 50 states,” Drucker said. “So theoretically, we could expand quite a bit.”