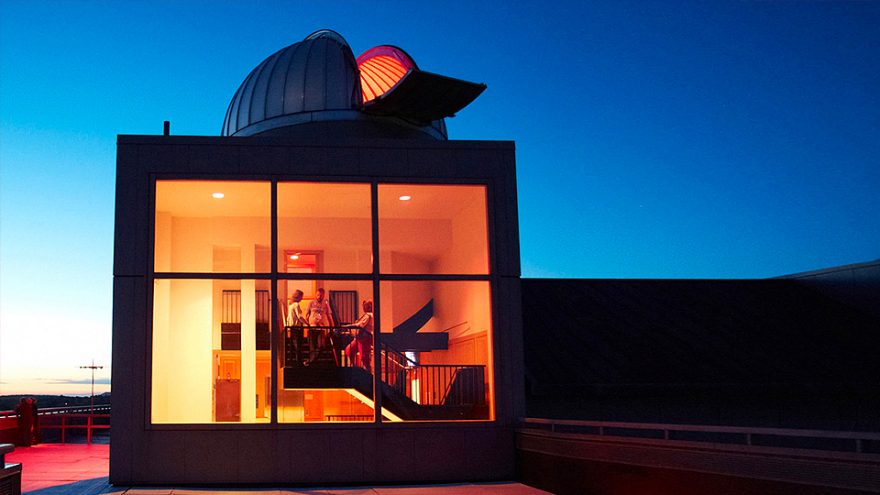 The gleaming dome of the Mittelman Observatory atop McCardell Bicentennial Hall may be the most visible marker of Middlebury’s astronomy program today, but the discipline has had a presence at the College since its founding. A new online exhibit, Through the Telescope: The Observatories of Middlebury College , tells the 220-year story.

The exhibit was created over a two-year period by Alexandra Izzard ’20, an art history major with an interest in the sciences. Izzard and observatory manager Jonathan Kemp wanted to design a presentation that would speak to the history of the College, the history of astronomy, and the connection between the two. The exhibit lends itself to quick study or deeper inquiry; while the  visually compelling entries are light on text, visitors who want to learn more can explore the trove of primary source links at the bottom of each page.

The exhibit is organized by year; click on “1803,” for instance, to learn that astronomy was considered so essential at that time that the Laws of Middlebury College required all third-year students to study it.

Not all of the curated events, however, are specific to Middlebury. Some refer to famous cosmic events. Others highlight little-known achievements. The 1925 entry, for instance, reminds us that women, though often overlooked, were making important contributions to science: that year, Radcliffe PhD candidate Cecilia Payne determined that stars were made largely of hydrogen and helium and could be classified by temperature.

Others, like the entry for 1971—the year that physics professor Frank Winkler and Martha Armstrong ’72 made repairs to the College’s dilapidated 1937 observatory, causing a jump in astronomy enrollment—give a glimpse into life on campus. The included image shows the restored observatory in the background, while in the foreground a band plays for students gathered on the lawn.

Kemp says of the exhibit, “If you just love Middlebury and want to be better connected to the institution, there’s a place for you there. And if you’re really into astronomy and the night sky, the telescopes, and the equipment, there are a few stories there. If you’re interested in some of the less broadly told stories in astronomical discovery, there are places for that as well.”

Through the Telescope: The Observatories of Middlebury College is currently available online only, but when COVID-19 restrictions ease and Bicentennial Hall can fully open, visitors will be able to experience the exhibit in person as it winds its way up the stairs between the sixth and seventh floors of BiHall. Kemp hopes the physical exhibit will encourage students of all disciplines to come see the observatory.

“Whether it’s astrobiology or astrochemistry, or whether it’s data science or computer science, or whether it’s understanding native cultures or historic views of the night sky,” he says, “there are so many interdisciplinary threads within astronomy that you can pull and pursue with someone who may not explicitly be a physics major.

“Astronomy,” he says, “has a unique ability, on the interdisciplinary front, to reach across subject matters at the College, in the truest sense of a liberal arts institute.