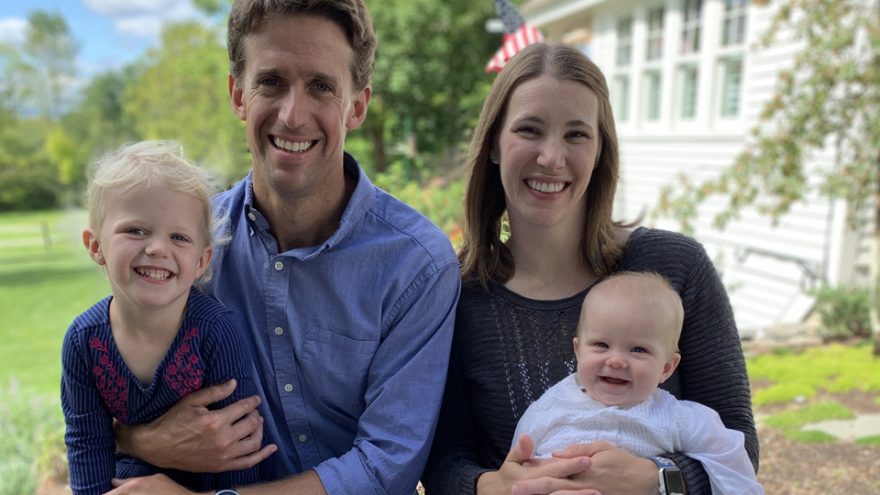 Four and a half years ago, life was about to change dramatically for Kelly Brush Davisson ’08. It had been eight years since a skiing accident caused her spinal cord injury, to which she adjusted. But in late 2015, she was pregnant with her first child. She had barely told anyone before I spent a weekend with Kelly and her husband, Zeke, at their home in Maine. Soon, they’d be moving back to Vermont, where Kelly would be starting a new job as a pediatric nurse practitioner. I felt goosebumps as I learned about a new life unfolding.

“What hasn’t changed since then?” Kelly says with a laugh from her home in Charlotte, which she and Zeke built on land not far from where she had grown up. We’re on a Zoom call in the waning days of summer 2020, and the midday light pours through a window as Zeke dashes back and forth in the background, working on the Kelly Brush Foundation.

Out of sight is not only the child Kelly was carrying when we last spoke—daughter Dylan, now four—but also a second addition to the family, daughter Nell, 18 months.

“It feels like a million years ago before we had kids,” says Kelly who, back in Maine, told me about the challenges she might face caring for a baby while using a wheelchair. The simple act of laundry was daunting.

“I grew with them,” she says now of her children. “I’ve just sort of figured things out.” Kelly’s spirit seems to already have rubbed off on Nell. “Her independence is incredible,” says Kelly. Dylan, meanwhile, is an extrovert and an athlete, but when she falls down, “she needs some love before she can get back up and keep going.”

Caring for the two of them has required Kelly to shift her schedule a bit. Three days a week, she’s working at Lakeside Pediatrics in Burlington as a pediatric nurse practitioner. “I see kids all day long—babies!” she says with a laugh on our Zoom call. The other two days are devoted to the Kelly Brush Foundation. “It’s been a really good balance,” says Kelly, who also gets a little time to herself. She’s discovered a zeal for reading and puzzles because of COVID, which has impacted family life, work, and the Kelly Brush Foundation.

“With the guidelines changing all the time, it’s really hard to know exactly what to do,” says Kelly of her day-to-day decisions at Lakeside Pediatrics during COVID. Severely limited visits shifted to telehealth, which has switched to somewhat routine visits and figuring out who can go back to school. “It’s like the Wild West,” says Kelly of working in the healthcare field.

It was the healthcare field, of course, that set Kelly back on track after her spinal cord injury, which led to the creation of the Kelly Brush Foundation (KBF) in 2006. When Kelly and I last spoke, KBF had one part-time employee and one full-time employee: Zeke. “We’re a lot bigger than that now,” says Kelly. “We’ve been able to add more people because we’ve been growing, in terms of both the money we’re raising and the impact we’re having.” KBF has given more grants and added more programming, growing 30 percent each year.

“We’re probably not going to hit our 30 percent growth this year,” says Kelly, referring to the COVID effect. But the pandemic has not deterred the KBF mission “to inspire and empower people with spinal cord injuries to lead active and engaged lives.”

And what if it’s another four and a half years until Kelly and I speak again? “We really want to grow and become a leader in the spinal cord injury community, and that’s still the plan,” she says. “We have a lot of really big ideas, and dreams.”

On September 12, the 15th Annual Kelly Brush Ride will push off with the same spirit of past rides, but with a new challenge. The event, which brings people together to support the foundation’s mission of empowering people with spinal cord injuries to lead active lives, will be virtual this year because of the Covid-19 pandemic. However, Kelly and the foundation have never been ones to shirk a challenge, and this instance is no different. Because of the virtual nature of this year’s event, more people can participate in more ways. Learn how you, too, can take part.