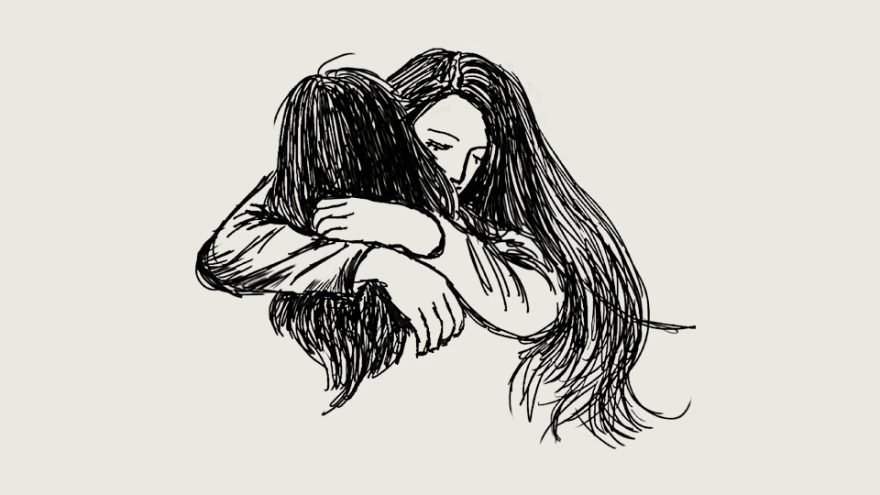 When Marianna Guédez Forgiarini , a graduate student in translation and localization management at the Middlebury Institute, fled her native Venezuela in the wake of civil unrest eight years ago, she wrestled with feelings of uncertainty and dislocation.

As a way to work through the pain and confusion, she turned to poetry, a hobby she had always enjoyed; over time she had crafted a collection of poems, many of which now make up her memoir in verse: Desde el Exilio: A Collection of Poems from the Exile.”

The first half of the collection is written in her native Spanish. The poems are short—just a few lines each—and arranged sparingly on the page, accented with simple but evocative images drawn by a Venezuela-based illustrator who remains anonymous over fears of retaliation by the Venezuelan government.

The second half is an English translation of the first, through which Guédez hopes to reach a U.S. audience. She would like her poetry not only to educate Americans about what Venezuela was and what it has become, but to impress on them the fragility of democracy and the responsibility of civic engagement.

Guédez recalls a privileged upbringing with her parents, both university professors, and her sister in the city of Mérida—“in the mountains, very beautiful.” But under populist Hugo Chávez, elected in 1999, the country became overdependent on its abundant oil revenues. With a decline in oil prices and the rise of autocratic leader Nicolás Maduro after Chavez’s death in 2014, the country suffered an economic crisis marked by hyperinflation and shortages of food and medicine. Antigovernment protests were met with violence.

In the first poem of her collection, Guédez describes her childhood as “a garden of hopes and unlocked doors.” It’s a stark contrast to her later life in Venezuela. “We were living in a beautiful house that my parents built,” she says. “And when the protests started happening, I would hear shooting from my house, in one of the most beautiful neighborhoods. And people screaming.”

In 2014, she graduated from the University of the Andes as valedictorian, with a baccalaureate and two bachelor’s degrees: literature in classical studies and languages, and literature in Spanish and linguistics. By then, she says, “the people were basically in the streets screaming for freedom. Maduro took the power completely through fraud by manipulating electoral power.”

“The only thing I knew,” she says, “was that I couldn’t stay,” though it meant leaving her family, who chose to remain. Becoming one of nearly six million people to flee Venezuela in recent years, Guédez moved to the U.S. and enrolled in an ESL program (she spoke no English at the time) and other classes, gaining permanent resident status through a university green card lottery.

In 2019, she quietly self-published Desde el Exilio, calling it “my little project before I started my master’s.” By the time she entered the Translation and Localization Management (TLM) program in 2020, she was already working full time as an interpreter and translator and had little time to promote the book. And then the pandemic hit, further pushing it down her list of priorities.

But eventually she turned her attention to marketing Desde el Exilio, reaching out to TV shows, newspapers, and podcasts and publicizing the book on social media. Through her efforts, she has kept busy with media appearances and speaking engagements at translator association events and universities around the U.S.

(Desde el Exilio has not gone unnoticed at the Institute either, where it has become what Ann Flower, library director, and Lydia Gentry, digital services associate, believe is the first book in the library’s collection written by a current student. )

During the fall semester, Spanish professor Sean Curran invited Guédez to be guest speaker in two of his content-based Spanish classes. He calls her presentations “the most impactful and informative classes of last semester,” with students so engaged in the Q&A portion they almost forgot they were negotiating the class in Spanish. He says of Guedez, “As a linguist and literary expert, an exiled poet, and a TLM candidate at MIIS, she is extraordinarily attuned to the power of language—especially vis-à-vis populist/nationalist politics.”

In addition to praising the beauty of Guédez’s poetry, Curran says that because her poems are presented in both Spanish and English, the book makes an excellent didactic tool, one he now uses in his classes when discussing Venezuela.

Desde el Exilio’s warm reception at MIIS stands in contrast to that in Venezuela. After Guédez posted some of her verse to social media and it went viral, the Venezuelan government blacklisted the book. Fear of repercussions against her family in Venezuela had prompted Guédez to originally publish the book under the pseudonym “Arcaniam.” But she says her family told her, “You have to show your face, because if you are afraid, what is the point of writing this? And you have the power right now to show the world what is going on.”

Guédez is touched by the praise she’s received from other Venezuelan exiles. But she reiterates that her goal was to reach an English-speaking audience, particularly, as she says in the introduction to Desde el Exilio, those who “are part of the vast majority of people who only know about dictator­ships through books, movies, and Internet.”

To those readers, she says, “If you understand even a little about what my country has lived, my poetry will have a sense beyond art, because when you vote you will know the impor­tance of the act you are exercising. I hope you’ll never have to live the horror that my people have suffered.”